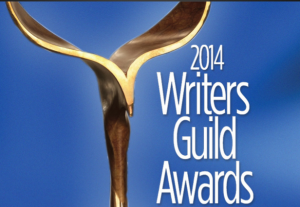 Award season is upon us and first up for the soaps, the competition for the 2014 Writers Guild of America Awards! Nominations honoring achievements for 2014 in television, new media, news, radio, promotional writing, and graphic animation were announced today!

Nominated this year from the network daytime dramas are the writing teams from Days of our Lives, General Hospital and the Young and the Restless.   The winners will be announced in ceremonies to be held on February 1, 2014 in simultaneous ceremonies in both New York City and Los Angeles!

To view the complete list of nominations in all categories, click here!  So, who do you think deserves to win this year?  On-Air On-Soaps will keep you posted if we learn the scripts/episodes that were submitted for contention!

General Hospital 1st choice…Days 2nd choice but Nicks story and ‘death’ almost makes this a tie for me!

Days Abigail will have an affair with E.J., and not Danial who i once predicted…i think! Its just a feeling after the way they were looking at each other…i could be wrong!

As a fan of DAYS, I am satisfied with the writing, but can’t deny the improved writing of GH.
I just hope YawneR does not win!

I agree about GH having the best writing !

what channel will it b on

I don’t think any networks broadcast the Writers Guild of America Awards. They all assume the general public only cares about the famous faces of actors and actresses, and the occasional well-known director, not the scribes who actually create the lines!

I wonder if Tomlin is officially gone from Days…

general hospital has the best writing!!

Perhaps CBS has some type of influence..

my original comment: GH is my first choice, Days my second choice but Nicks story and ‘death’ almost makes it a tie for me! Days Abigail will have an affair with E.J. and not Danial who i once predicted…its just a feeling i have after the way they were looking at each other in a previous episode! I could be wrong!

What did each soap submit so I CAN DETERMINE WHO WILL WIN???

GH ,but why is it I have never heard of ANY of the Y&R writers. Not a one.