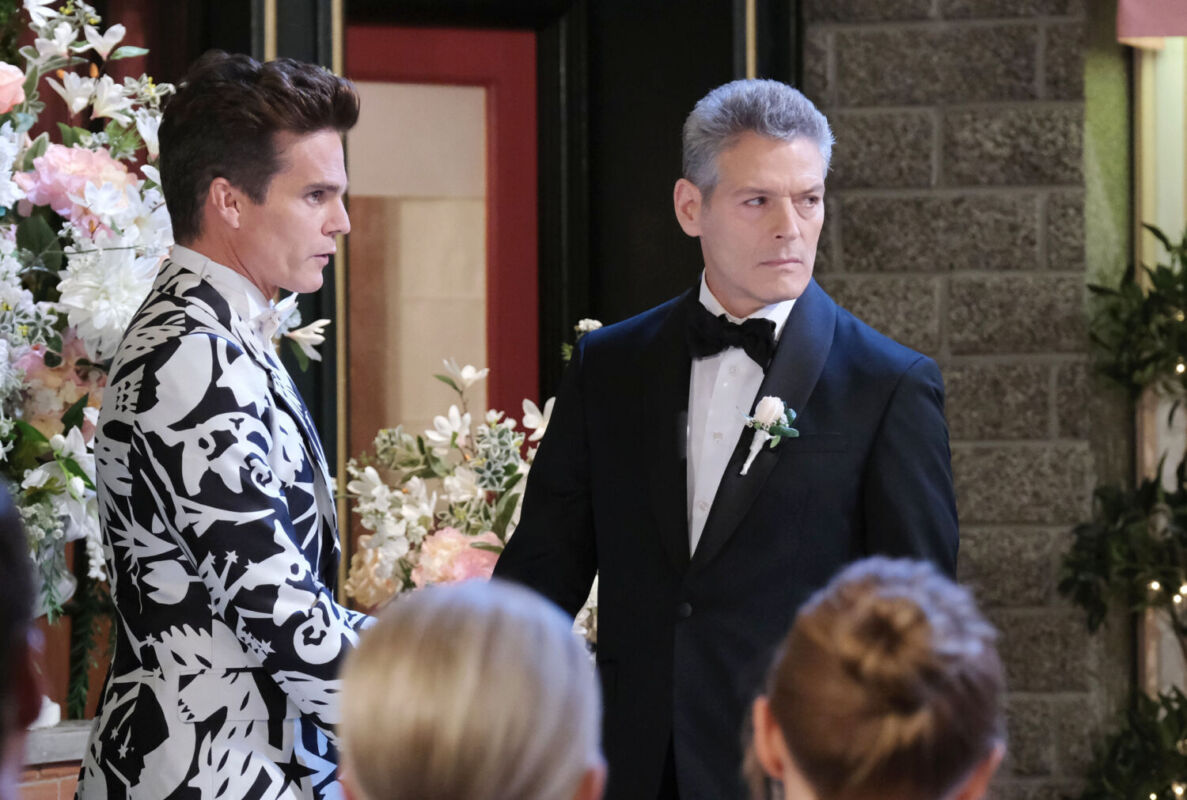 Wednesday’s episode of Days of our Lives was filled with hilarious one-liners and great comedic timing from Greg Rikaart as Leo Stark, a surprise guest at the double wedding of Leo to Craig (Kevin Spirtas) and Gwen (Emily O’Brien) to Xander (Paul Telfer), and more.

As the ceremony begins, Brady (Eric Martsolf) has asked Justin (Wally Kurth), who is officiating the double wedding, to stall and stretch things out as long as possible so that hopefully Chad (Billy Flynn) has time to get back to Salem with the intel to blow up Leo and Craig’s union.

Craig’s ex-wife, Nancy (Patrika Darbo) attends as well, and without Clyde (James Read) which was not expected.  Nancy met Clyde the other day on a dating app with plans she would take someone with her to the wedding, but when she shows up alone, she tells Bonnie (Judi Evans) she thought it best that Craig and everyone see she had the strength to stand on her own. 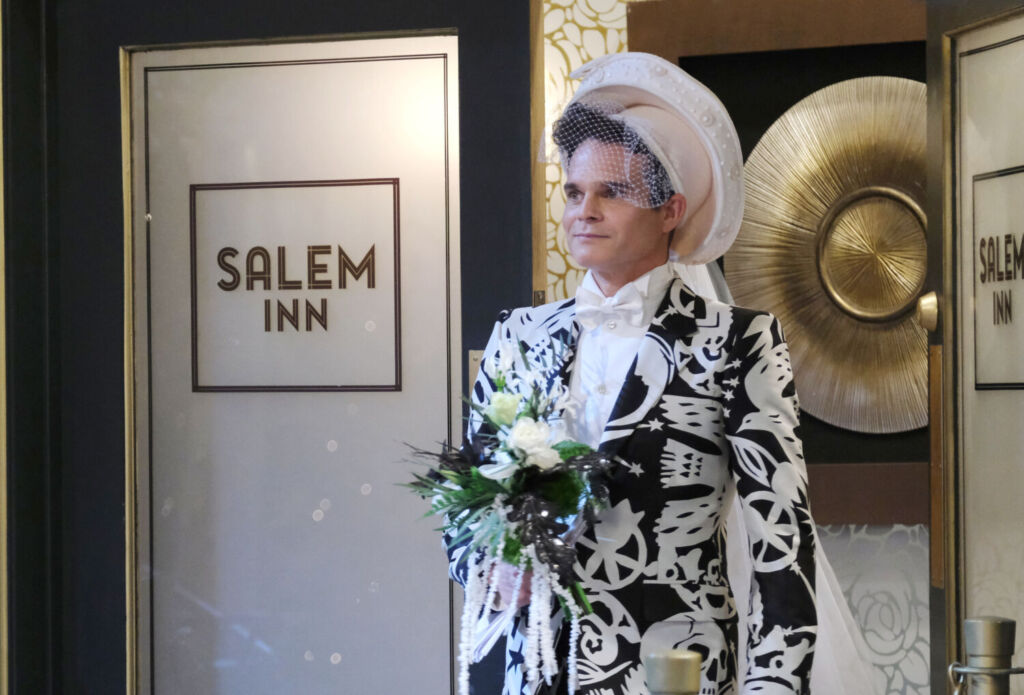 After Jack (Matthew Ashford) walks Gwen down the aisle, Leo enters in one of the great entrances of any wedding in Days history.  Posing for the paparazzi, Leo has his big moment in the sun as Gwen and “Matty” (Leo’s supposed nickname) relish the moment.

Now, Justin has to start the ceremony (in a very funny comedic turn from Wally Kurth) while continuing to stall and come up with ways to delay the wedding of Leo and Craig.  First, he asks if anyone objects and Nancy stands up, but all she does is wish Craig all the happiness in the world.  Once she sits down, Justin goes around the room and starts talking about all the guests.  Then, with nothing left to do, Justin starts having a sneezing attack while trying to get to the wedding vow portion of the ceremony.  Now, as Justin is declaring the men ‘husbands” running in to save the day is Chad, followed by Jackie Cox! 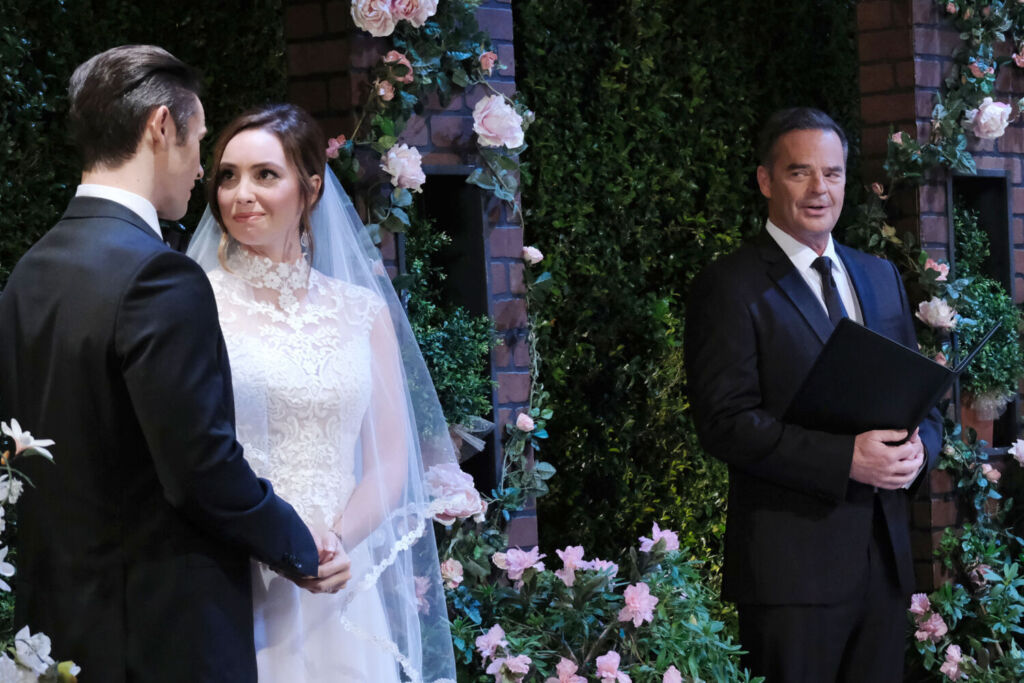 It is then Cox reveals that he is married to Matthew Cooper AKA Leo Stark, complete with a wedding certificate.  Then, Jackie turns from drag queen to his real self, Darius Rose.  Leo says he married Darius to keep him in the country from Canada and for Darius to get his green card.

Chloe jumps up and declares that this is bigamy! Craig wants to understand what is going up, but he claims he understands why Leo did it. Justin says that there is no way he can sanction the wedding and it will take a few days to unravel all of this.  Then, Darius reveals Leo’s relationship to Craig is one big ‘flim-flam’. 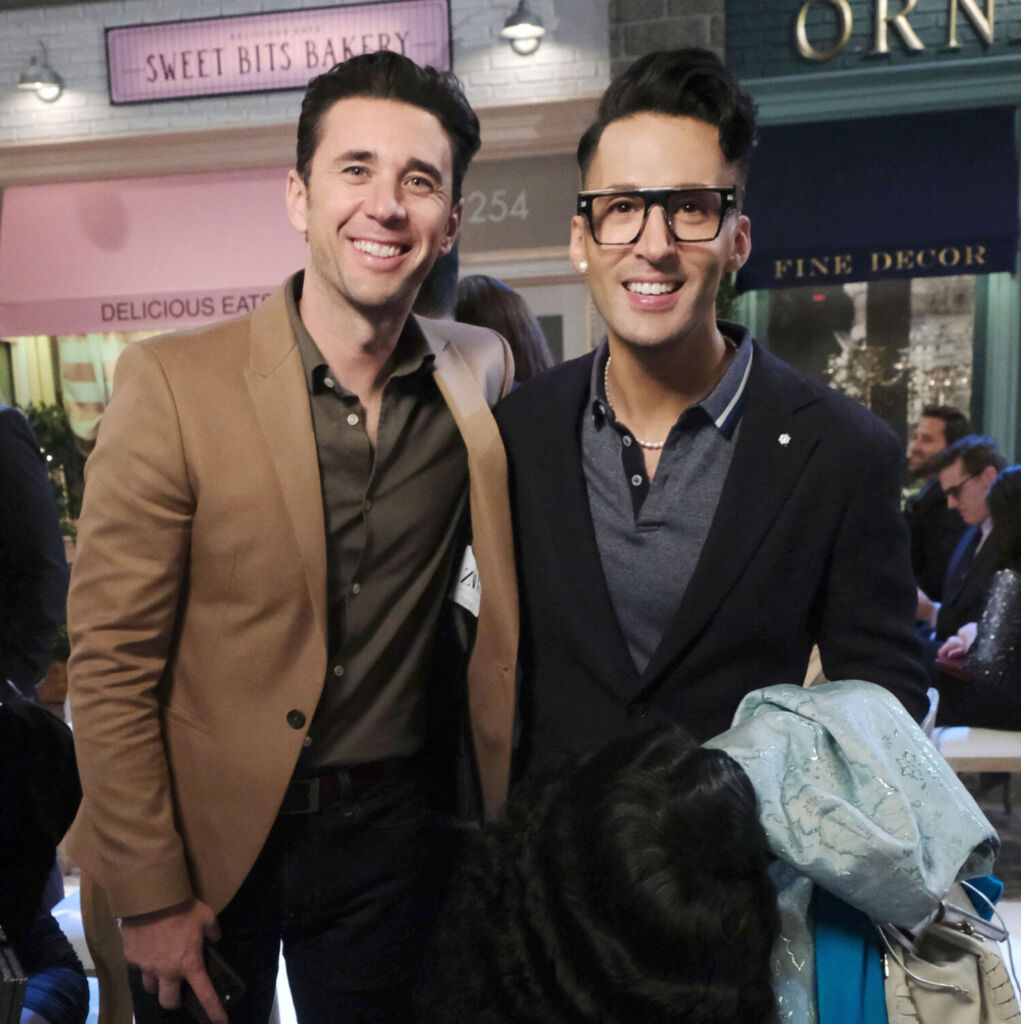 Wanting to tell the truth, Darius reveals that Leo targeted Craig once he saw Craig at a medical convention. He shares he has all the texts saved from Leo, and the two of them were planning on splitting all the money Leo would inherit, but he was unaware of the pre-nup.

Leo reveals that it was his original plan, but along the way he says he fell in love with Craig. However, when Craig asks when that was, Leo could not quite pinpoint it.  Craig walks out on Leo, as Leo begs for forgiveness.

Later, Chloe (Nadia Bjorlin) finds her father alone in his hotel room and he breaks down in her arms, while Leo tries to see Craig and is blocked by Brady.

And if all that is not enough, just wait! It’s Gwen’s turn to get what’s coming to her since now Abigail is armed with ammo to blow her life sky high.

So, what did you think of the episode? Did you enjoy the writing and the performances and how Craig and Leo’s marriage attempt went bust … Or, did you not like how it all played out? Comment below.

‘Days of our Lives: Beyond Salem’s’ Kristian Alfonso Teases Return: “The Viewers Are Going to be So Happy”

THIS IS US: Mandy Moore Breaks Hearts As Rebecca Sings at Kate and Phillip’s Wedding

Poor Craig. I really felt sorry for the guy…. but he can’t say he wasn’t warned. Repeatedly…..

Leo’s entrance was fab. Leo is so much fun. I hope he doesn’t leave. I didn’t like when they broke up Craig and Nancy, but it has brought some good moments.

I agree. And since Y&R can’t find anything for great Greg Rikaart to do, at least we can enjoy him here. As Kevin or as Leo, I think he’s hot…and a lot of fun.

Right? I love the actor, as well, no matter the role. Imagine the devil in him, albeit I am so tired of this storyline.
Hey, Soaphound—did you notice how Paulina stuck that filthy binky into the baby’s mouth? I know there was no baby, but I cringed at the thought. I’m a germaphobe!! Abe said he found it on the floor? All the more reason the pacifier should have been boiled. I pay attention to what seems as insignificant stuff such as this.
( correction–toddler– below)

OMG—That was hilarious—I just love Rikaart. His bridal ensemble was out of this world. Is there any hope Leo will stay? He livens up the show!!
As unreal as his shenanigans are? —better watching him than hearing Lani’s todlers sound like newborns—and in a pram to boot.
Please, please, please—get rid of the devil. I guess he’s sticking around for Ben’s and Ciara’s baby. It’s so torturous watching the silliness unfold.

I really enjoyed this episode especially when chad and the drag queen showed
Up and Chad advised that the wedding
Cant go ahead and Leo is shocked and
Craig wanted to know why Leo was not
honest to him in the beginning.