In a great episode of Days of our Lives, Tuesday brought with it the return of Greg Vaughan as “Father” Eric Brady to exorcize the devil out of Marlena (Deidre Hall) for the second time in her lifetime, but it was not easy.

First, in the bedroom, Sami (Alison Sweeney) finds Lucas (Bryan Dattilo) almost untying the MarDevil, after Satan threatens him with revealing he was the one who kidnapped Sami and even tells Sami, that Lucas has been lying to her! Lucas worms his way out of the situation saying that he has been lying about his feelings for Sami.

Meanwhile, an overwrought John (Drake Hogestyn) is so happy to see Eric in his mother’s time of need.  When Eric takes off his coat, he reveals that he is once again a man of the cloth – priest collar and all.  Eric fills John in that it was actually Nicole (Arianne Zucker) who made him come to the realization that he wanted to serve God again, when she told him that ‘collar or no collar, he has never changed.” 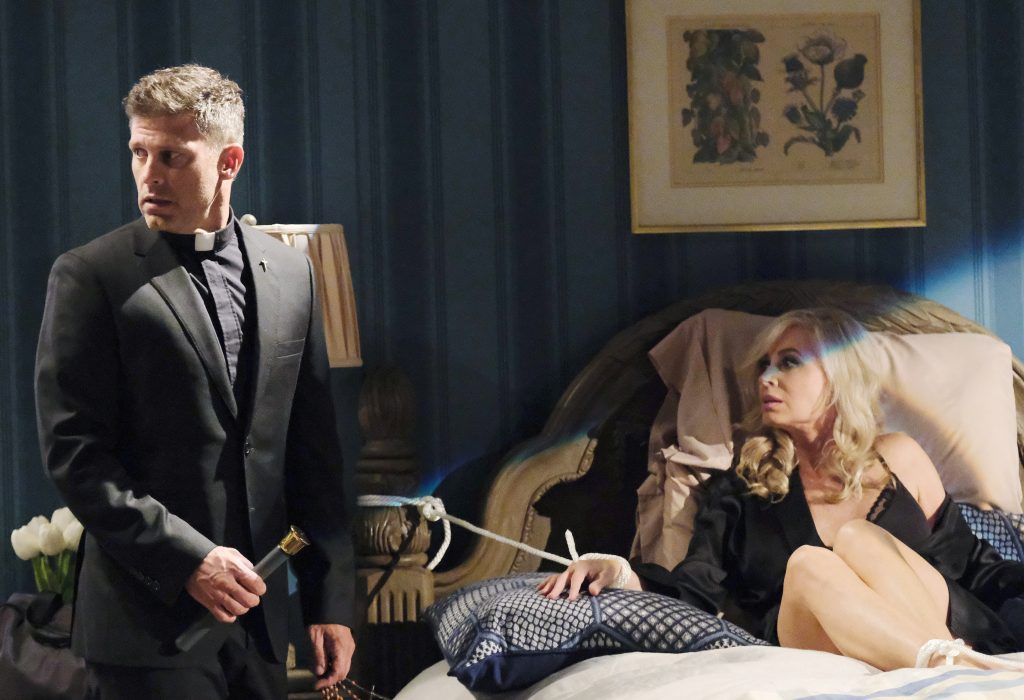 Next, Eric meets the MarDevil and tells John to leave him alone with Satan.  MarDevil spews that Eric is an arrogant little man and that he will die.  Now the MarDevil questions how his parishioners who saw the videotape of him having sex with Kristen – although Eric reminds Satan he was drugged – would welcome him as a priest?  Next thing you know, MarDevil shows the infamous sex tape on a laptop! Then, Satan said she thought his true calling was working in “adult entertainment” not for God.

Going for the jugular, MarDevil morphs into OG Kristen (Eileen Davidson) and she is tied to the bed, cooing for Eric, for another roll in the hay.  Eric becomes drawn in and if it were not for Brady (Eric Martsolf) walking in on the scene, urging his brother to resist the devil’s tricks, who knows where this would have led!  But Eric does resist, and MarDevil returns, saying that the fallen priest and his boozy brother are no match for her!

Now that the family is all congregating in the living room not only has Brady arrived, but so too has Belle (Martha Madison), Allie (Lindsay Arnold), and Johnny (Carson Boatman).  Eric explains that they all need to band together to perform an exorcism on Marlena and rid the devil from her.  Lucas exits deciding it should be for immediate family only, and he is already concerned that Satan knows he kidnapped Sami.

In the bedroom, Marlena’s family surrounds the bed as Eric begins the exorcism.  The family prays as Eric asks everyone to join hands and say the Lord’s Prayer.  As they begin the prayer, wind begins to blow and the bed goes up and down as MarDevil is defiant that Marlena will never return.  When the bed settles down, everyone thinks it’s over, but MarDevil surprises everyone and still has a grip on Marlena.

MarDevil then verbally attacks Belle and reminds her that she was the first one to give up on Marlena when she was in a coma and how she cheats on the men in her life calling her a “cheap slut”.  That is followed in kind when MarDevil goes after Sami and calls her a “professional slut”.

Eric insist the family talk directly to Marlena.  They all become a united front as MarDevil is struggling to maintain control.  Then, in a fantastic series of flashbacks, we see Marlena’s memories coming through of each of her family members – and of course, best one ever, of all-time, is John and Marlena reuniting on the pier.

You then hear MarDevil let out a scream “No!” and then she passes out.  After everything is once again still in the room. John sits next to Marlena and calls her “Doc”.  She wakes up, saved!  It’s the Marlena everyone knows and loves!  She is saved on Christmas.   We fade to black.

What did you think of Marlena’s exorcism 2.0 and the episode? Let us know in the comment section below.  But first, check out this tweet of the flashback memories contained with the episode as Marlena fights the devil!

“I will delight in you all the days of our lives” ❤❤ I’m completely undone 😭😭😭 I love this family; you can feel every single bit of love they have for Marlena. #Jarlena #Days pic.twitter.com/KM7j6HAwgh

GENERAL HOSPITAL: Sonny Takes the Stand and Winds Up Torching His Marriage to Carly

Days of our Lives Preview: Can the Return of Father Eric Take Down the MarDevil? Plus, Lucas’ Secret Could Be Exposed!

The most iconic episode of soap television that I’ve ever seen! The script sizzled! The performances were uniformly spectacular, especially from La Deidra Hall. No one will ever top this in my mind. Absolutely the best! I can’t buy or throw enough roses at this storyline masterpiece.

Hey, I brought Eric back home! And they say a Devil never does any good deeds??

Wish the devil could’ve stayed longer. DAYS was boring before he possessed Marlena.

Joel,
While it was good in part I was really getting weary of it all. I kept thinking,am I going to like Marlena again when this is all over?

Ok, you talked me into it. I’m sticking around!

Go back to reality please, it’s no wonder soaps are failing. Thanks to fast forward I could avoid most of this storyline.

I agree. It really is a sub-par plot and is a glaring example of the sorry state of soaps these days.

I was entertaining, but please leave storylines such as this for Halloween – Once and done!

It was so exciting. How ever I knew the devil went into someone else.

This has been the most uninspiring, repetitive piece of nonsense….Ever!! Time to say bye-bye—The story is carious, yet it continues “in” Johnny. Really??!! C’mon—gimme a break! The idea that the non-existent Satan is far too indomitable is getting more and more vexing— I can only deal with so much countercultural beliefs. The writers are forever contradicting themselves. On one hand they embody the power of the Almighty in Eric and familial love to defy Satan; then they transfer the evil into Johnny? Bah Humug!! There is no higher power than God’s. For shame—writers, you are making a mockery of our… Read more »

Hey, who are you calling “non-existent”??

As for me relocating into Johnny….. can you really blame me? I mean Marlena was like putting on a comfortable old sweater, so that was a good place to be through the Hellidays…. but now, we’re moving into 2022, so it’s time for this Devil to find a new beginning. And maybe I don’t need Ciara’s baby anymore, since I can make a little Antichrist myself with Chanel!

HaHa—oh, you exist, all right, Satan. Where there’s good, there needs to be evil—Thus, your deviltry does live on. I mean specifically in Salem. That time has passed—passed and long gone twenty-tive years ago. One cannot rewrite the same theme with minimal variations and call it entertaining. Where is the drama?Perhaps it is just I? —for those viewers , who love the continuance of a devil-chasing parody of the genre? Then, this is perfect– go for it!! For myself? The paranormal in this soap has sidetracked to Timbuktu and forgot to come home. I’d like a challenge and Johnny’s chubby-cheeked,… Read more »