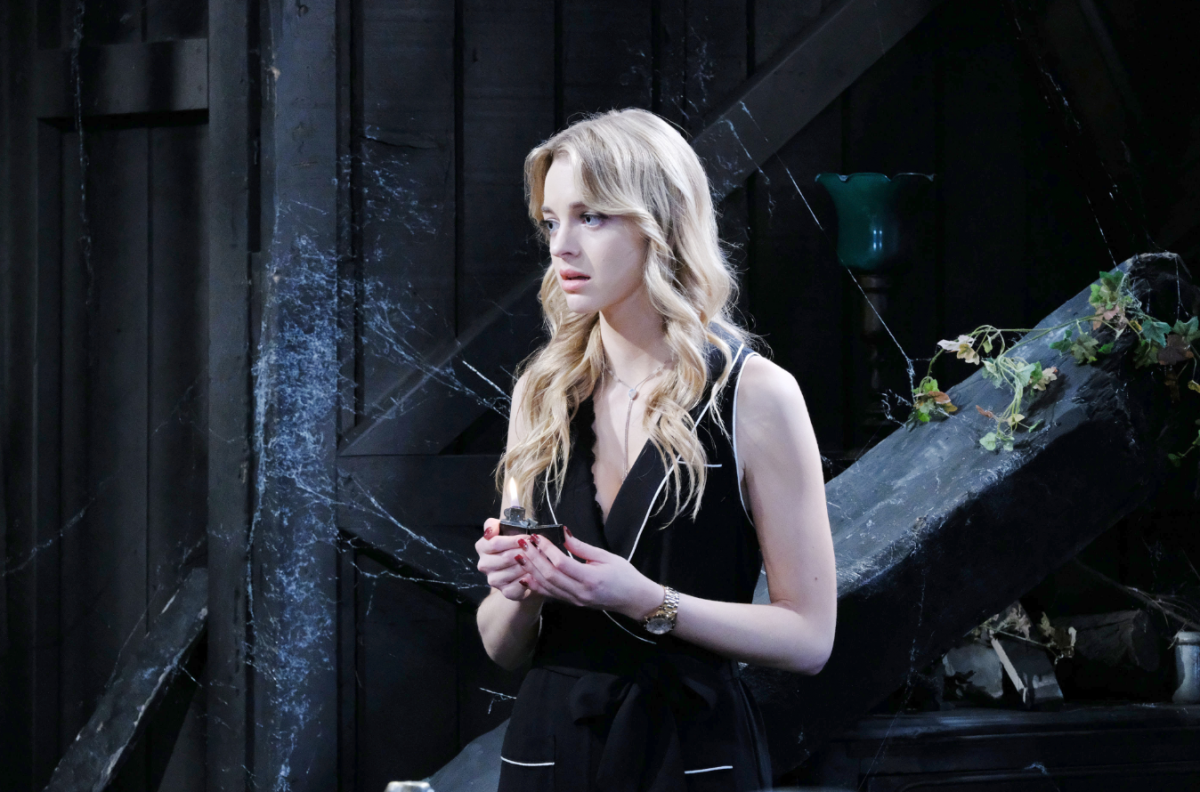 Although she is exiting the show on-screen next week on Days of our Lives, Olivia Rose Keegan (Claire) got the opportunity to go out in a blaze of glory (those damn lighters!).

If you caught this past Tuesday’s installment of the NBC daytime drama series, Claire finally became entrapped and completely unhinged, after being set-up by Tripp (Lucas Adams) and Ciara (Victoria Konefal); where everyone learned she was the responsible party for the notorious cabin fire and was about to attempt to set her rival, Ciara, on fire in a cabin, yet again, after taking off with her.

In the process, Tripp was held with a knife to his throat by Claire, and eventually hit his head trying to get away from her knocking him unconscious.  The perfect opportunity for Claire to make her getaway with Ciara.

Once at the Cabin, Claire pours gas all around as Ciara begs her to stop, while she is chained to the bed.  Claire then flicks the lighter.  To the rescue come Ben (Rob Scott Wilson), Hope (Kristian Alfonso) and Marlena (Deidre Hall); who have tracked down where the young women are.  Ciara calls out to Ben, who breaks down the cabin door.

Just then, Claire holds out the lighter with the flame ready to start another fire.  Knowing she is caught, Claire starts to explain how she lost her mind in all of this.  Ben tries to talk her down and to please put the lighter away, as does Hope.  As a desperate mother, Hope begs Claire to let Ciara live, and tells Claire that she knows she really doesn’t want to do this.  Hope tells her that she knows that Claire loves them both.   As Ben rescues Ciara, Claire closes the lighter as Marlena holds her.  As the others get out of harm’s way, Marlena says she has got this … and now it’s Claire and Marlena alone and inside the cabin together. 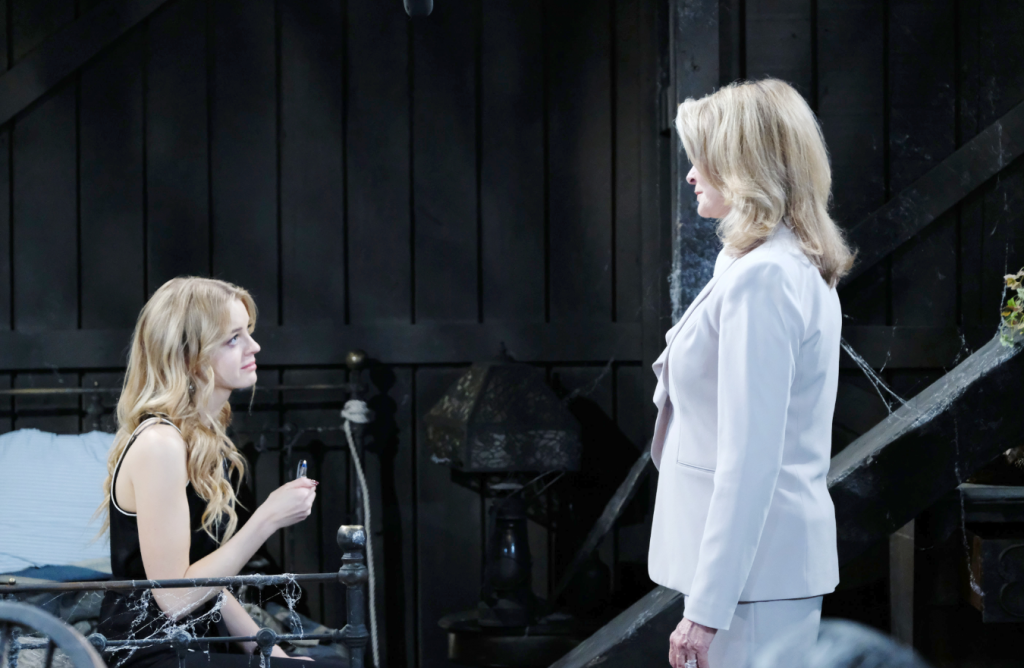 But then, wanting to end her own life, Claire picks up the lighter and flicks it open.  She tells Marlena she can’t go back and says, “It’s better if she dies.”  Claire thinks she’s a monster and certifiable … and is as criminal as what Ben Weston has done in his past.  Reassuring her and talking her down, Marlena promises Claire that with help, she can turn her life around as Ben has done.

Claire breaks down as Marlena holds her.  Next, Marlena is able to get her out of the cabin, away from setting herself on fire, and on her way to the hospital for observation, until it can be figured out what’s next for the troubled young woman.  As they leave the scene, Claire sobs uncontrollably knowing she is a damaged soul, has lost her way, and realizing the harm she has done to other people.

In all of these scenes, Keegan brought the angst, the mental instability, and the realization of Claire’s horrific motivations to life, in a dramatic, and not over-the-top way, even in the most melodramatic of soapy circumstances.  For those reasons, Michael Fairman TV names Olivia’s work are Power Performance of the Week. 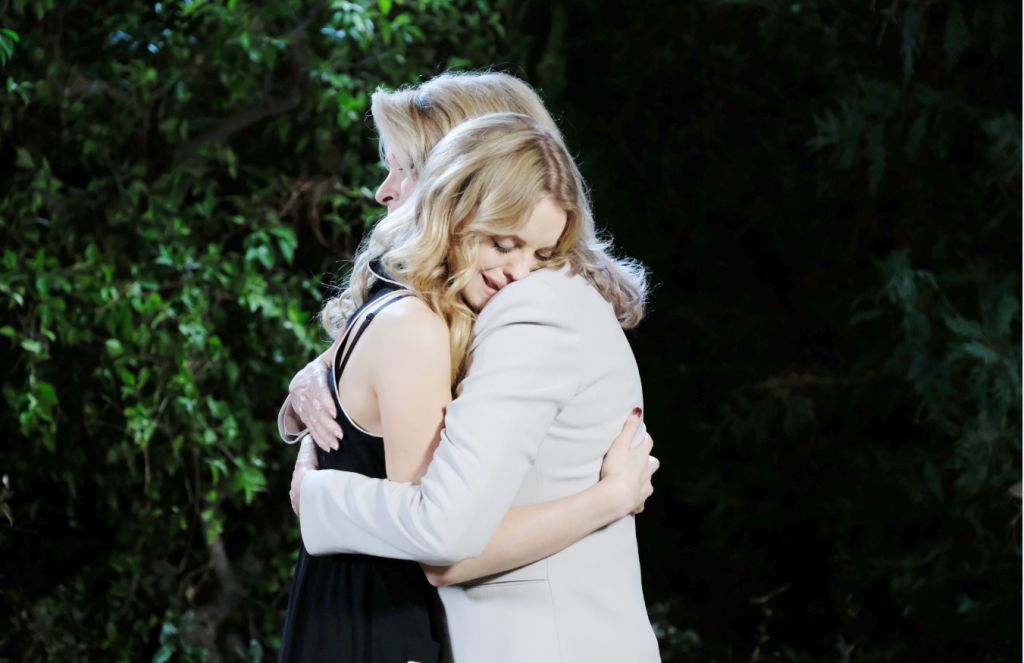 Knowing those scenes were part of her final days of shooting on DAYS, Keegan told Soap Opera Digest in an interview (in their latest issue on newsstands now), “Obviously, it was sad to shoot.  And it was emotionally demanding and bittersweet, because Victoria Konefal and I are best friends.”

So, what did you think of Olivia’s performance in the key scenes? Share your thoughts via the comment section below.

THE YOUNG AND THE RESTLESS: Chelsea’s husband, Calvin Found Dead … But Just How Did He Die?