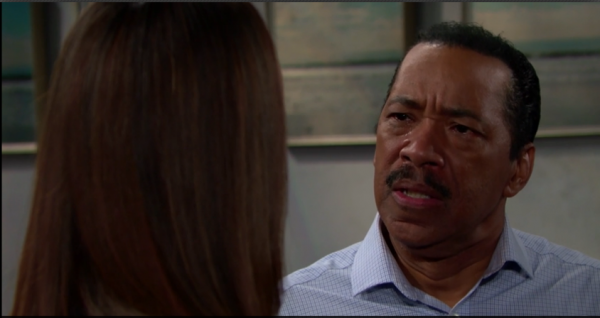 The Bold and the Beautiful’s Obba Babatundé was just named the Outstanding Guest Performer in a Drama Series at Sunday’s 43rd Annual Daytime Emmy Awards.

Obba won the gold for his scenes where Julius and his transgender daughter Maya (Karla Mosley) have a major confrontation at Maya and Rick’s (Jacob Young) wedding.

Now, comes another stirring and memorable performance that should be remembered come Emmy time next year!  The action happened on Tuesday’s episode of B&B.  The set up has that Nicole (Reign Edwards) has learned that Sasha (Felisha Cooper) is her biological sister, and that Julius is their father, but Vivienne (Anna Maria Horsford) is not Sasha’s mother.   This happens when Sasha spills the beans to Nicole in a confrontation over the man in their life, Zende (Rome Flynn).

Now alone with Julius, Nicole lets him have it for his deception, and Julius in tears explains to Nicole how he was driven to another woman, which seems to have stemmed from Myron (now Maya) and Vivienne turning his back on him years ago, and turning to someone else for comfort, or so he explains.   In these scenes both Obba and Reign Edwards brought the drama in compelling performances.

Later, after promising to set the record straight with Vivienne before Nicole does, Julius instead goes to confront Sasha. He lets her know how he took care of her, and how me made sure Vivienne was in her life. But now that she betrayed him, by revealing the one thing he asked her not to do and to keep quiet about, Julius bascially tells her he doesn’t want her as part of the family.  With one tear streaming down his face, and defiant and hurt, it was Obba at his best.

YES! That was such an amazing performance. I was riveted to the screen. He was amazing. And kudos to the writers for the material. It was a fantastic episode.

It was a great performance. Can’t say enough about Obba. But don’t forget Sasha and Nicole…they have been very good as well. Helps being in scenes with a really good actor…rubs off.

OK-
I have watched BB..
Nonetheless; Obba Babatundé touched me while watching his scene.. (BRAVO!

I replayed the last 3 minutes of yesterday’s B&B to observe Babatunde’s masterful handling of his scene with Sasha. What he did in those few moments was really special, true artistry! Felt really fortunate to be watching…

He was in the original cast of Dream Girls on Broadway

It is not easy to portray a jerk, yet evoke a bit of sympathy for the character at the same time, and he did that with the scenes that won him an Emmy and he has done it again with these scenes. Actually his character is one of more complex ones to come along on B&B, normally Brad’s characters are pretty shallow and one dimensional, but this character has layers and this actor knows how to reveal them slowly and with restraint– so he is jerk, but he is a jerk for a reason and that is refreshing on any soap to actually have a character that has some depth to them, whether that is the actor’s doing or the writing it is nice to see.

I always love the scenes Obba does—he really knows how to chew scenery but this was definitely his best day yet. What had to have helped was the 2 young ladies he was acting opposite with because they were very good in their scenes with him too so that must have added that extra punch he needed to wow us with his performance. This has been one story that I have been interested in from the beginning.

Today’s episode should be good as well.

And yes, very impressed with Reign and Felisha. And Anna is always good!

I can’t believe this man had me in tears! I truly believed his performance as if it was life imitating art. Wow! Standing O, but you’re still a jerk, ;).

Anna, Reign and Felisha were brilliant in their performances. I appreciate the writers/director for choosing to give these women the normal and realistic reaction to a difficult and hurtful situation that no one wants to deal with.