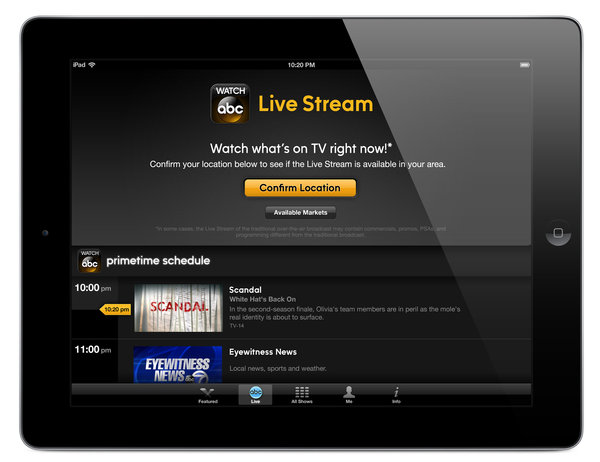 Walt Disney Company’s ABC s looking to become the first broadcast network to go live on the Internet on a full-time basis.  Today they announced “Watch ABC” which will debut this fall and allow viewers to watch the network from mobile devices and tablets when they are away from home.

“Watch ABC” will basically be a live stream of the network’s feed as well as local programming such as news. “Watch ABC” allows viewers of such programs as General Hospital to view their shows in real-time.

According to L.A. Times,  “The service is only available to people who already have a pay-TV provider. Also, it will initially not be available in every market because ABC needs to reach distribution agreements for Watch ABC with all its local affiliates.   The first two markets to have Watch ABC will be New York and Philadelphia starting May 14, where ABC owns the stations. Then ABC will roll the service out to other markets where it owns local TV stations including KABC-TV Los Angeles.  Also partnering with the network on the service is Hearst Corp. which owns several major market ABC affiliates including outlets in Boston and Pittsburgh.”

“Watch ABC is a game-changing innovation for the broadcast television industry,” said Anne Sweeney, co-chair of Disney Media Networks and president of Disney/ABC Television Group. “This announcement represents a defining moment in technology and distribution, as well as for our advertising and affiliate partners, as we ensure that our high-quality content is available to viewers on a variety of devices.”

The “Watch ABC” effort represents a dramatic shift in the way networks view the Web. While much of the TV industry has been focused on putting content online, it has mostly used the platform for video on demand, not live TV. The reasons for that approach are several. First, there was a school of thought that consumers were not interested in watching live TV on the Web but instead preferred to use it for movies or to catch up on shows they may have missed.

Another issue had to do with the often complex relationship between broadcast networks and the local stations that carry their programming. The local stations don’t want viewers to be able to bypass them and just watch a national ABC feed on the Web. That would hurt their ratings and ad revenue.  That meant ABC had to ensure that the interests of its affiliates were protected and that any feed include their local programming in any online linear feed of the network. In addition, many local stations carry syndicated programs that they may not have the rights to offer online. There are also rights issues regarding sports highlights that appear in local news and even music rights.

So soap fans, what do you think of the having an app to allow you to watch everything on network television as it happens on the go? Would you watch General Hospital that way?  Let us know!

Haven’t watched ABC since they canceled AMC and OLTL! If I don’t watch it on my TV I most certainly won’t be down loading their App!

Not if it meant that my GH would change in any way that effected the characters, the actors, or the integrity of the show I have watched since 1965. If I still had my hour long show, and I could see it live on the network, and it would count towards the ratings for GH then yes.

Still boycotting ABC. Love the news about Susan Lucci being in the Smithsonian!

We cancelled our cable last week, because $150 a month for internet and cable was just crazy. We’re only using a Roku, and it would make sense for ABC to step into the 21st century and make this “Watch ABC” app AD-SUPPORTED instead of making it available only to those homes with cable, but they’re not logical enough to understand that.

I shut off my then about to be $50/mo cable in mid 2008. Haven’t missed it, except for going thru withdrawals for OLTL and GH, which I watched when I could or online at lunchtime at work. But I didn’t miss those $50 bills one bit! And I just got high speed internet, but I just had it added to my regular landline phone bill – it was wayyyyy cheaper than those bundles. They try to make it such a big deal to have it all bundled and “on one bill”… well my internet and phone are still on one… Read more »

ABC/Disney is doing some innovated thinghs these days..
They were the first to have prime time soaps of value that were busting cjharts, and still are..
Now they are aiming at millions who do there viewing on-line..

CBS tried to do the prime time soaps but they were not near a great as ABC’s and some didn’t make it..

I know some are still boycotting ABC, and ABC does not notice or give a damn about them lol and they are missing out on some really great prime time viewing/soaps..
It is the boycotter’s loss not ABC’s … lol (ABC wins on that one)

We know that ABC does not care that we boycott them. We do it because it makes us feel better. There is no loss to me because there is nothing worth watching on ABC.

I respectfully disagree. I’m boycotting ABC and I’m not missing a thing.

I choose to not watch abc and could care less what they think about it. I have found that I do not miss them.
Sorry, abc does not win on that one.

Um, not really. If they aren’t losing then why do they need an APP now that PP already went to internet. Why watch any of their shows when they will just cancel them anyway, regardless of what their fans want?

You people who are boycotting ABC are just so adorable. I wish people like you would focus your attention on important things like cancer research and the like. As for your comment CeCe, ABC is quite logical – they make much more money from the cable/satellite companies than they would from app advertising

Glad you find us ‘adorable’. But you have absolutely NO idea what else we may be focusing our attention on. Very insulting.

Takes no time on my part to boycott ABC.

So boycotting ABC is a waste of time that could be spent on cancer research.. so WATCHING ABC is what? Saving the rain forest or serving the greater good?

GH people get so offended that we won’t watch ABC, and therefore, not supporting their soap. GH will be cancelled soon enuff, and these same people defending ABC are gonna look like fools for sticking up for them when they have said the soap genre is dead.

The future of TV is on the internet.. AMC and OLTL are leading the way!

I first watched Santa Barbara. It was canceled. I didn’t boycott NBC. Shows are canceled all the time. It’s business. I understand that networks are in business to make money. I get over cancellations and get on with my life.

Think how much Cancer research you could have done while typing this condescending crap!

This app doesn’t sound groundbreaking to me. I watch GH on hulu or abc.com or I dvr GH (the only ABC show I watch) and watch at MY convenience.

Me neither, who doesn’t have a App these days. Only ABC would theirs is groundbreaking.

This will not make me watch abc/d any more than I already do.

This is good news for #GH fans. I still won’t watch ABC (except for GH). I still can’t forgive them for cancelling #OLTL & #AMC. They are trying to court us, but for me, IT WON’T WORK!!! #ElephantsMemory

I see there’s more than one AJ.. guess I need a more unique moniker.

i just record to DVD when I’m on vacation… same as when I’m at work and watch later. And it’s on free TV – antenna and they do not count me… but sometimes I watch GH online, but it’s still in the evening, so live stream doesn’t interest me. I actually prefer to watch it ‘not live’ cuz then I can fast forward thru parts I don’t care about. I’m not surprised they are doing this, but they obviously missed the boat time wise. Just think if they had done this 2-3 years ago and instead of cancelling shows, they… Read more » 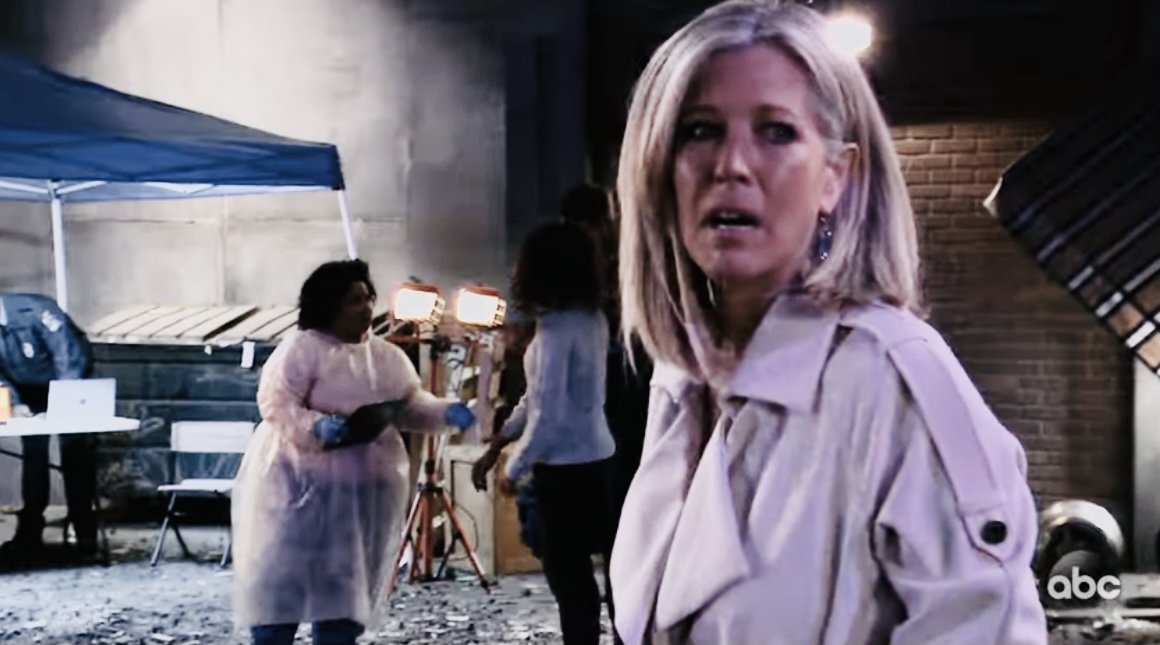 General Hospital fans are eagerly awaiting Monday’s episode after the stunning Friday cliffhanger which had an unknowing Julian (William deVry) detonating the bomb he placed inside the Floating Rib on orders from Cyrus Renault (Jeff Kober).

In the newly released ABC promo for the week, they ask as does Carly, “Who Died Tonight?”

Fans then watch a series of images of Port Charles citizens outside where the bomb exploded but who were not inside at the time it went off.  Those include: Dante, Laura, Sonny, Carly and Julian.

Watch the explosive promo below.