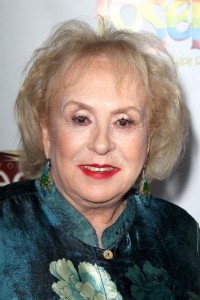 The incomparable Doris Roberts has passed away at age 90.  The actress died peacefully in her sleep of natural causes on Sunday.  She is survived by her son, Michael Cannata, daughter-in-law, Jane and three grandchildren.

Two actors very familiar to daytime audiences were two of Doris’ closest friends: Thaao Penghlis (Andre DiMera) of Days of our Lives and Jack Betts (Ex-Ivan Kiping), formerly of One Life to Live.   Both men’s facebook pages on Monday night were filled with condolences from fans and followers on the loss of their beloved friend.

Patricia Heaton posted the most touching tribute to her former co-star:  “Truly the end of an era. My wonderful TV mother-in-law and ELR nemesis Doris Roberts was a consummate professional from whom I learned so much.  She was funny and tough and loved life, living it to the fullest. Nothing gave her greater joy that her three wonderful grandchildren, of whom she was so proud. It truly was a privilege Doris. I love you and miss you.”

Doris was the longtime chair of the Children Affected by AIDS Foundation.

Doris Roberts was a presence throughout my entire life. From her appearances on Angie, then Soap, Desperate Housewives and Everybody Loves Raymond, I have never been without her. RIP beautiful, wonderful and funny Doris Roberts. Godspeed!!!

And don’t forget Miss Roberts’s wonderful role as “Mildred Krebs” on “Remington Steele,” Mateo! That’s where I was first made aware of both her dramatic and comedic talents……what a great, classy show with a cast to match that one was!

Doris Roberts/Marie Romano .. You were much loved and precious.
You gave me years of enjoyment and laughter, a great gift to all..
Your life was an awesome journey.. Walk on !

Awwww, su…how thoughtful and poetic. Love your praise of this ‘joyous’ human being.
Rest in peace, Doris.

Doris Roberts was an experienced, traveled sophisticated woman with a wonderful career. I enjoyed watching her “work” (which seemed effortless because she was such an adept professional ). I also enjoyed watching her on “talk shows” in which she revealed her real personality and wisdom. So happy she had 90! years to celebrate her life.

Wow, How Wonderful was she! What a graceful passing Rest in Peace

I have enjoyed watching her for years and saddened to hear she passed away but I am happy she passed away peacefully in her sleep. Thank you for entertaining us for so many years! Rest in peace.

I’m shocked! This news came on my phone at the very moment she was on my tv as I’m watching Raymond. Love her! Such a funny and talented lady, will always be missed.

Very sorry to hear about the passing of Doris Roberts. Loved watching her on Everybody Loves Raymond!!!!!!!! & on many other tv shows. My condloances to her family, May she RIP.

I loved her on Remington Steele and on Step By Step. My favorite scene on SBS was a Thanksgiving episode: Her character instructs Al (Christine Lakin) to put her hand in the turkey’s butt. Al is grossed out by it, so DR delivers the line “It’s no picnic for the bird, either.” ❤️

As an actress and comedienne, Doris Roberts was A CLASS ACT all the way!!!!! Rest In Peace, Miss Roberts. You will be missed. Amen.

I loved Doris Roberts so much, she was a wonderful actress. Very classy, sassy lady. Rip my dear lady.

Wow, I had absolutely no idea she was 90. She must have found the fountain of youth!!! Our televisions are never going to be the same! Prayers to her family through this loss. It seems to me that “She did it her way”.

She was wonderful-enjoyed her in everything she done…

She was a great actress.

Classic character actress ! They don’t make them like her anymore! You ll be missed Ms. Roberts! God Speed!

I loved her on Angie a short lived sitcom from the late 70s. I’ve you tubed the opening credits and now I can’t get that song outta my head LOL! RIP Miss Roberts you were so funny!