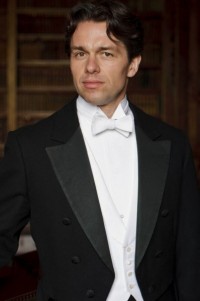 When Downton Abbey season four debuts in the U.K. first, and then in the U.S. come January, three new actors will take could woo the ladies of Downton’s heart! Which ladies will fall for these men?

We all know that Lady Mary and her portrayer, Michelle Dockery have already teased there may be more than one suitor for her this season, after the shocking season three cliffhanger in which Matthew Crawley (Dan Stevens) was killed-off, leaving Lady Mary alone with her new born child!

According to a piece this week in the U.K’s Daily Mirror, they introduce to the audience three casting additions:  Tom Cullen who will play Lord Anthony ­Gillingham, a friend of the Crawleys.  Gary Carr, who will play American jazz singer Jack Ross.  And Julian Ovenden (pictured here) who  arrives as aristocrat Charles Blake.

According to the Daily Mirror, “Dad-of-two, Ovenden has real-life posh credentials – he went to Eton and is the son of Canon John ­Ovenden, the chaplain to the Queen.  Maybe now he has bagged a role in the hit drama he will step up to new heights, as TV royalty.”

What do you think about the new gents? Do you think Julian Ovenden could be the man to sweep Lady Mary off her feet?  Weigh-in!

THIS AUGUST on GH: It's A Matter Of Life And Death! – Watch The Promo!

THIS WEEK on DAYS: Kristen Is Pregnant! What Do You Think Of The Plot Twist?