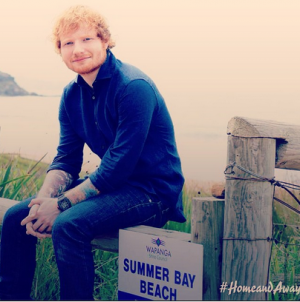 Pop sensation Ed Sheeran, whose songs have climbed the charts and was recently nominated at this year’s Grammy Awards, next stop will be to appear on the Australian soap opera, Home and Away!

According to the The Telegraph UK, the British singer/songwriter who is currently down under on tour will be filming scenes with Home and Away star Emily Symons, who plays Marilyn Chambers.  While the storyline is being kept under wraps, Ed will appear as himself in the soap in an episode to air later this year, but as to how he gets in the mix of things will be of interest.

Sheeran said of his decision to appear on the soap:  “It’s an Australian institution. It’s always on in my local chip shop. I got asked to do it and it sounded like it could be fun. I did Shortland Street in New Zealand as well and I’m sure if Emmerdale or EastEnders ever ask me in England I would do that as well. I  have got to a point where I really, really don’t care what people think so I’m doing stuff because I enjoy it now rather than because it might be cool. I am just in it for fun.”

The singer becomes the only international celebrity to appear on Home And Away and the biggest musician since Aussie pop star John Farnham was on the soap in the late 1980s.   Rival soap opera Neighbours on the other hand has had musical artists from The Pet Shop Boys to Paula Abdul in the past.  The Home and Away Instagram account posted this photo of Sheeran announcing his upcoming appearance.

What do you think of Sheeran wanting to do Home and Away? Do you wish more musical acts would come to the U.S. soaps? Comment below!

READ MORE
Is Green Day's Billie Joe Armstrong Coming To The Young and the Restless?
Related Topics:Ed SheeranEmily SymonsGrammysHome and AwayInstragram
Up Next

Eileen Davidson Confronts Brandi Granville About The Constant Attacks On Her In Unaired Scene From RHOBH!