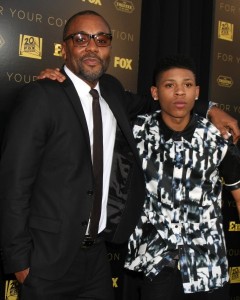 Lee Daniels soapy creation, Empire headed into its first break of the season on a ratings uptick on Fox Wednesday night!

According to preliminary national estimates from Nielsen, as noted by Variety, Empire averaged a 4.8 rating/15 share in adults 18-49 and 12.2 million viewers overall from 9 to 10 p.m., up a tick from last week for the show’s first week-over-week gain of the season.  It was also up 4% from its fifth episode of its rookie season. Empire was especially dominant in adults 18-34, where its 4.3 rating/17 share more than doubled the No. 2 program on Wednesday, ABC’s Modern Family (1.9/7).

The sudsy drama is scheduled to be off next week for Game 2 of the World Series, which will be broadcast by Fox Sports, and could be off on November 4th as well if a seventh game is needed.

Empire showrunner Ilene Chaiken spoke to Variety about the game-changing events that will be picked-up when the series returns in two weeks or so.   In terms of Hakeem’s (Bryshere Gray) kidnapping, she teased:  “It’s got a trade term — it’s called a snatch-and-grab. It happens in the music business, in all kinds of celebrity business, but particularly in the hip-hop business. It really is the story in episode six, but the issue of whether or not Lucious and Thirsty have something to do with it is key to the story.”  Jamal (Jussie Smollett) is cheated on by his boyfriend Michael (Rafael de la Fuente) in a shocker.  Chaiken revealed why the story turn: “As we talked about that story, we conceived that story a little behind the scenes — we met with all the actors over the course of the season and when Jussie Smolett came into the room, we wound up talking a lot about having a relationship when your fame is going through the roof. We thought that was an interesting story. We thought, is it going to go to Jamal’s head? And then we realized it was actually a much more interesting story to see Jamal’s boyfriend cheat on him. Jamal is a man who can pretty much have anyone he wants, and the one person that he really cares for hurts him because he’s so threatened by Jamal’s fame.”  And as far as Cookie’s (Taraji P. Henson) new love interest, Laz Delgado  (Adam Rodriguez), Chaiken would say:  “You’re going to learn a little bit more about him in the next episode. I thought there was some crackling tension between them. Clearly she’s intrigued, and he’s intrigued. They’re flirting — straight up! I’ve never noticed Cookie sitting too long on that type of feelings. I think they’re two people who are quite likely to act on their attraction to each other.”

So, what did you think of last night’s episode of Empire? Upset Hakeem was kidnapped? Who has him?  Intrigued by Cookie’s new man?  Upset that Michael cheated on Jamal?  Are you digging season two?  Comment below!

Days of our Lives Scores Most-Watched Week In 19 Months!

I was a huge fan of “Empire” during its first season. I thought the acting was great, the storylines moved at break-neck pace and the cast was amazing. I have watched three of the five episodes this season and continue to struggle with enjoying the show. I have HATED some of the smaller storylines, especially Cookie instructing Anika to sleep with Marisa Tomei’s character just to close a deal. I found that slightly offensive to the character. How many straight women would sleep with a woman just to close a business deal? During the first three episodes, I could not… Read more »

Have not seen Wednesday’s ep yet.

Did not like the season premiere ep. Too much going on.

I do not like all the music. I know it’s a show about music, but I want to see acting and story.

Some of the stuff I have not liked. I am still watching. I still enjoy it. I do not enjoy Hakeem’s ‘acting’. He’s okay when rapping, but he can’t act. It’s so one note.

I still love Empire. Terrence and Taraji is amazing. And I also love Trai Byers; he is an excellent actor. I can admit that the season premiere had too much going on but overall, I feel that Cookie and Lucious’s drama saved the episode. There were some great scenes and I still wanted more. I was not a big fan of Anika sleeping with Mimi either; I know people do that kind of stuff but it seemed unnecessary and another way to further humiliate Anika. She is not my favorite character especially after what she did to Courtney Love’s character,… Read more »