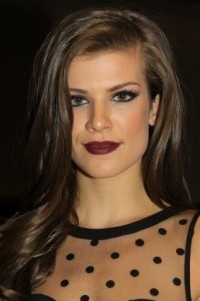 Kelley Missal who wowed soap audiences with her portrayal of Dani Manning in the reboot of Prospect Park’s One Life to Live will be seen in this coming Wednesday’s episode of the hit NBC drama series Law & Order: Special Victims Unit where she will play a young woman who is an alleged rape victim of a pro basketball star!  The series is touting this episode entitled, “American Disgrace” as a ripped-from-the-headlines story that will air on October 1st at 9PMET/8PMCT!

Former Another World star Henry Simmons plays the basketball player Shakir “The Shark” Wilkens.  Shakir is in trouble with the law when Missal’s character of Carla Cannon informs reporters she was sexually assaulted!

In story, when more women come forward, Benson (Mariska Hargitay) and Detective Carisi disagree on the authenticity of each woman’s story, and Barba (Raul Esparza) takes a shaky case to court.  Elsewhere while working on the case, Rollins (Kelli Giddish, Ex-AMC) travels to her former precinct in Atlanta, where ex-colleagues bring up old memories.

Watch a promo featuring Missal from Law & Order SVU after the jump!  Then let us know if you will be checking out Kelley in her guest-star turn …  and if you would like to see her appear on another daytime soap!  If so, which one?
Related Topics:Henry SimmonsKelley MissalKelli GiddishLaw & Order: SVUMariska HargitaynbcOne Life To Live
Up Next

RATINGS: DAYS Has Solid Week Adds Total Viewers And Up In Key Demos!

I’ll be watching! She’s so talented. I would love to see her on OLTL again–when ABC brings the show back–as they should!

Louisa OLTL will never come back to ABC, it is to late now. All the actors have moved on. ABC made a huge mistake, in cancelling OLTL. I hope ABC chokes on it.

Kelley is a wonderful actress. and deserves much success what ever she does. I would love to see Kelley on The Young and The Restless as the new Abby Newman. This Abby is a horrible actress. Kelley would make a great Abby Newman.

She would make an AMAZING Abby or even Summer!!!!!! The current Summer is awful, how she swiped an Emmy is beyond me!!!!

Kelley Missal is a very talented actress!
She is one of the best actors to be with a soap.
I always thought someday she would return to a soap..
I will watch her on SUV
it will be fun to see her perform, again ..

She would fit that role well, plus she is very talented.

I agree, she would make a great Abby Newman on Y&R. She would also be a good Kristina on GH

I’d love to see her on GH! Excellent actress.

She needs to go to GH I can see a Michael/Morgan triangle with her – sorry Kristen Alderson.

So happy for Kelley. So want her on GH somehow. She is such a good actress!

Wish her all the best. She was great on OLTL.

I too, would love to see Kelley on GH as Christina. She’d be perfect for the role. I can see her having brilliant scenes with Nancy and Maurice. I loved her on the OLTL reboot, but I’m assuming she’s an East Coast actress…come GH, bring Christina back, and make Kelley an offer! She’s a brilliant choice.

Not sure if this was mentioned on any of the previous posts but Lenny Platt (Kelly’s ex-boyfriend, Nate, from OLTL) has a role on How To Get Away With Murder. Always liked him too!

Kelley was so great on OLTL and it’s a shame we couldn’t see her progress on there.

She was great on that episode of SVU, I hope to see her land a spot on a primetime series or comeback to the soaps. She would be perfect for the new Kristina on GH.