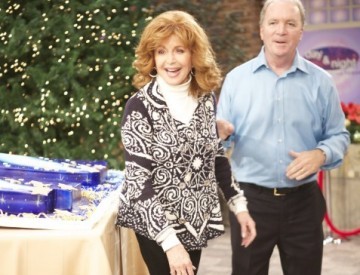 As we previously reported, this past Tuesday marked Daytime Emmy winner, Suzanne Rogers 40th year on Days of our Lives as the beloved Maggie Horton!  What Suzanne did not know was that she was being set-up for a big surprise from the cast and crew and her mom on the set of the Horton Town Square at the NBC sounstage!

While the cast and crew and press were gathering, On-Air On-Soaps Michael Fairman was enlisted by DAYS to help keep Suzanne occupied while they rolled in the cake, and got all the attendees in place!  So what better way and least suspecting way to do that?  Tell Suzanne that Michael was here to interview her for her 40th anniversary, and to meet him in her dressing room.

Without Suzanne knowing this was a delay tactic, Fairman conducted a true 40th anniversary interview with Rogers all about many of the key points in her illustrious career with DAYS including: Maggie with the red shoes, the three Johns in on-screen love life (John Clarke, John Ingle, John Aniston), when the show “killed-off” Maggie in that huge publicity ploy, her winning the very first Outstanding Supporting Actress Award at the Daytime Emmys, and so much more.

But while she was answering the questions, we had a flip cam and iPhone filming the whole thing, and what was to follow!  Thus, the reason for thebootleg-esque footage quality! Next,we waited for the signal from the overhead public address system telling everyone to get to the stage!  If you watch the video, you can see it was all part of our plan.   What happens next is you will see Suzanne’s immediate surprise as we show you how she met all of her castmates, crew members, and the press.    Following that, Michael caught up with her to get her thoughts on the surprise and to wrap up the 40th anniversary interview!

Watch the interview/surprise/”punkfest” after the jump and let us know what you thought of it?  What has been your favorite story for Maggie over the years?  Share your thoughts!

Who Would You Cast In the Role Of Alexandra Forrester On The Bold and the Beautiful?

LOL…. you know he’s tough… tender… has the last laugh. can command

woah! this so came out of left field…. find my bearings…. ease up Mr. Man.

it was funny, devious, machinations intrigue….

Nick is on the road… and Im happy to watch.

love that he still has tender scenes with Gabi…. it was when he was most happiest…

when they are engaged and she was pregnant…. I just love Blake Berris.

She’s so special! Thank you Suzanne for 40 years of Aunt Maggie!

Wow… Michael… what a lovely lovely interview!!! You are so talented and such a genuinely sweet and caring person who gets the best interviews… bar none!!! Suzanne is a lovely and talented lady and I wish many more years of doing what she loves and giving us great memorable moments!!! What a nice thing for them to have done and what a fabulous thing for us that you do what you do so well and that you share those moments with us!!! Congratulations Suzanne and thank you Michael!!! Loved it!!!

Have loved Suzanne for 31 of the 40 years since I was a teen. Talented, classy, beautiful – then and now.

Michael. I loved loved the interview with Suzanne, and the surprise aftewards from the cast and crew and everyone else. She is a true treasure and I wish her many more years on Days……..

How very lovely. Suzanne Rogers is the heart of DAYS now that Frances is gone. I have met her in person on two occasions. It was a blessing. Szanne is so gracious, beautiful and grounded. My grandmother watched DAYS from its first day. Maggie was her favorite character. She loved the Red Shoes story the most of all storylines. Three generations later and we all still love Maggie> So pleased DAYS planned a celebration in her honor.