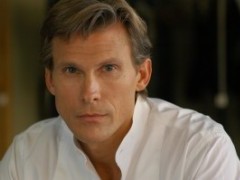 Now this comes as a welcome shocker!  In Carolyn Hinsey’s latest blog piece for New York City Brand Productions website, the home for now of Tainted Dreams, the upcoming series about the the inner-workings of a soap opera with a twist, Hinsey talks with beloved former Guiding Light star and now part of the “Dreams “cast, Grant Aleksander!

When speaking about the loss of Guiding Light (where Grant played “Phillip Spaulding”) going off the airwaves, Aleksander related that the shows late great one time producer, Paul Rauch was actually working on resurrecting it!

Grant acknowleged:”Oddly enough, Paul was working on getting the show back on the air before he died. He had gotten pretty far with that, he was talking to big network executives. P&G was interested. When you look at what’s going on in Stamford right now (where AMC and OLTL have been filming), I don’t think P&G will just sit on a creative property if there’s a profit to be made.”

Can you imagine if P&G finally would work its way to bring back GL into the internet space or through cable deal?  What do you think of the fact that Rauch was working on this before he passed away?  Share your thoughts below!

EXCLUSIVE VIDEO: Suzanne Rogers Being "Punk'd" By Us On Her 40th Anniversary With DAYS!

One Life to Live's Robert Gorrie Talks On His First Season As Matthew Buchanan!

I agree. I started watching One Life To Live back when he was the ex producer in the late 1980s and fell in love with Buchanan clan. I was also a fan of GL for a couple of years in the early 90s and then in the late 90s. With oltl n amc back and full force, it be great to have this iconic soap back.

As wonderful as this sounds, realistically I don’t believe he would have gotten very far. I don’t believe P&G have any faith that soaps can turn a profit anymore and for that reason alone would never get back in the business. I do appreciate Rauch’s passionate attempts and wish this champion of the genre was still around to fight for it but I have a hard time buying P&G would reconsider.

Well P&G wouldn’t have to produce it, just be willing to lease the rights for the show and the characters to a third party– like ABC did with PP. Right now the shows aren’t making any money for them at all– leasing the property would at least give them some money for something sitting on the shelf. P&G owns the rights to a number of former soaps– if proved successful with one dead soap, P&G might open the vault and let a lot of other former soaps shine. Well at least a girl could dream.

I didn’t watch Guiding Light everyday; but, I did off and on while in High School. I liked it back then, in the mid-90’s. I was sad when it went off of the air. Maybe it will be back someday. I’d like to see it on television, though, not the web. They had a talented cast!

I would love to see Guiding Light being reconstructed again with Reba, Josh, and Phillip being part of the cast. AMC and OLTL are living proof that any dream can be made possible if you want something bad enough. Hope some company has the vision and means.

if they need a headwriter and want new talent i’m available! Watched the show since 1992 and read the 60 year anniversary Complete Family Album from cover to cover.

I remember when Paul Rauch prodiced Another World with Harding Lemay as H.W. back in the 1970s…1968 to 1979 was when AW was at its best, especially the Steve, Alice, and Rachel love triangle when the evil Sven worked as the Corys groundskeeper who murdered Rocky and the children Jaime and Dennis found his dismembered body under the floorboards i think was the Corey boathouse…Days and The Doctors were also at their best at this time as well as several others but not as good as the 3 NBC soaps i mentioned…soaps today have some good storylines but they were… Read more »

Wasnt it P&G who wanted out of the soap opera business?

I think it would’ve been great to re-enter the world of Springfield and see how everyone has been! I think P&G would’ve been a bad choice since they didn’t help the series in the first place. And with GL resurrected, ATWT could’ve been next!

P&G owns the property rights to the show– He had to go to them to get the ball rolling. They didn’t have to produce them just be willing to sell or lease the rights to the show in order to bring them back. But the point is moot because Mr. Rauch passed away and don’t know if anyone else is interested in trying to revive P&G former shows.

I am ready for this to happen. Guiding Light is the only soap I watched faithfully through the years. Those families and stories meant a lot to generations of viewers and losing it was like losing a family friend that had been part of the fabric of our lives. Kudos to anyone who can make this happen. I am not giving up hope…after all…OLTL is back ! Yeah!!

Guiding Light was at the top of my favorite soaps too, and I have so missed it.

Unlike others, I don’t have warm feelings for Paul Rauch’s period on CBS shows though; however, I would be happy with anyone who would attempt to revive GL. Hope the idea didn’t die with Rauch. 🙁

Yes, I feel the same about PR’s era on GL…I’m a lighter through & through, I love the GL. His & the Brown’s time was a mixed bag at best, I enjoyed many of stories, Abby’s restored hearing, Annie Dutton, the madness of hurricane Dinah, Olivia’s schemes, Danny & Michelle romance, return of Lizzie & Beth, introduction of Cassie, Holly as the nursery rhyme kidnapper, Bloss & Ben triangle but when the cloning, time transporting, letting go Marj Dussay, recast of Annie to just name a few was horribly off target for GL…but I would welcome GL back anyway I… Read more »

Still miss GL and ATWT. It would be great to have them back. I can’t see Propect Park getting involved, they have enough on their plate.

I suppose the big question is, have Prospect Park profited from OLTL and AMC yet? If the answer is yes, the possibilities are endless.

You would need someone with a vision and a track record to bring GL back to life, there are not too many like Paul Rauch out there.

OMG!! To somehow bring back Guiding Light would be the BEST DAY OF MY LIFE!!! Paul Rauch was very good at what he did. His work on Santa Barbara, Y&R, and Guiding Light was some of the best drama, daytime had to offer. Please P&G keep soap history alive!!!

I would strongly prefer P&G reinvest in Another World……

Bringing GL back would be the greatest thing for me.. I miss it so!
I miss all the wonderful actors on GL especially the loving story of Otalia
It touched my life in such a special way and brought wonderful friends into my life
Bring back Crystal Chappell and Jessica Leccia .. Please… and all the fine actors of GL ..Their love story was amazing.. a first and best touching love story ever on a Soap for me..

Guiding Light has always been my favorite soap of all time. It is too bad he passed before it could happen and that he could see that happen! With the success of AMC and OLTL it might not be too late for GL, especially if they do it soon since it’s already been 4 years next month!

Hooray! Although this news came as a big surprise, I had an inkling that someone, somewhere was trying to resurrect GL. Paul Rauch is the perfect person to start it all. I am a big fan of his. When Paul Rauch was the executive producer of GL (1996-2002), the show was the best and most compelling it had been since the 1980s with Gail Kobe and Pamela K. Long. It is too bad Mr. Rauch is no longer with us to continue the project, but with the huge successes of the new All My Children and One Life to Live,… Read more »

I sincerely hope that GL and ATWT will be resurrected.
Some things should never die. Please bring them back to life on
daytime TV or even night time will work.. Those soaps
gave life to television! Reality and game shows
are not very uplifting. I record B&B and Y&R everyday and
can’t wait to get home to see them.

So, what would you want to ask Ellen Parker about her exit from the show as Maureen? What do you recall about the storyline? Comment below.
Continue Reading