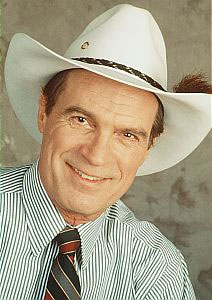 “OLTL’s” original Clint Buchanan, Clint Ritchie has passed away. The Radar Online is reporting this story this morning.  Here is a post from the article:

“The handsome cowboy shocked his family and friends after successfully getting a pacemaker implanted only to die 10 hours later, quietly in his sleep.

Clint Ritchie’s longtime friend and bookkeeper, Linda Honore tells RadarOnline.com, “The last time I saw Clint was last week when I took him some leftovers. He had been sick for awhile. My thoughts and prayers go out to the family.”

Clint, 70, was best known for his 20-year role as “Clinton ‘Clint’ Buchanan” on the popular ABC soap. The avid horseman suffered a heart attack in late January and had a pacemaker implanted, but unfortunately a deadly blood clot formed and he died in the early hours of Jan. 31.

Clint, who never married or had children, lived on his 60-acre Happy Horse Ranch in Grass Valley, Calif., near Sacramento with his horses and many dogs and cats. He starred in a number of TV Westerns in the ’50s and ’60s including the 1965 pilot for THE WILD, WILD WEST. He also acted in movies, including The St. Valentine Day’s Massacre, Patton, and A Force of One, but he loved the role of “Clint Buchanan” because it allowed him to show off the real cowboy side of his character. Ritchie joined the cast of OLTL in 1979 and retired in 1998. He reprised his role in several encore appearances, the last in 2004. His role was eventually recast with Jerry verDorn.”

“On-Air On-Soaps” will have more reactions to Clint’s death in the coming days ahead.