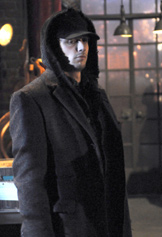 Today was the day that James Franco spoke his first lines and it was his first “official” day on air, although he appeared for a millisecond on yesterday’s GH.   Franco’s coming to Port Charles to play ‘an artist whose canvas is murder’, named Franco helped propel some great numbers for General Hospital.  It was the week’s No. 1 program in Daytime in women (18-34). And it marked the series most-watched week in this demo in more than two years. And that’s not all folks, GH reached a 7-month high in total viewers with 2.82 million eyeballs.  James Franco uttered just a few sentences today, but if this is any indication of his pull without being on for most of the week, GH should pull in some impressive numbers for daytime something that is surely needed for the genre.

And many reporters around the country are reporting and tuning into GH for the first time who had no idea that GH was really a Soprano’s type soap opera! They still thought it was all scrubs and hospital staff making out in appropriate places.  Below are some reviews: one from the Palm Peach Post “As for Franco the artist, he apparently likes rearranging dead bodies and recreating crime scenes, and he’s stalking Jason the hit man – there was a creepy scene where he waved at Jason as the mobsters drove away from the shoot-out, and gave Jason the shivers. It was sort of awesome, because I really don’t like the mob. Later, you see him getting all sexy with his agent, the deliciously slinky Marsha Thomason of “Las Vegas,” and you see there’s just something off about the guy. Sadly, it all comes back to the mob. But Franco’s so intriguing – there’s an amazing amount of there, there – that I’m hooked.” 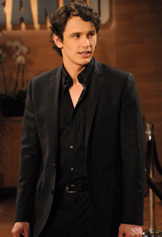 From New York Magazine’s Vulture column that has been reporting on Franco’s surprise move to a guest-starring soap stint said, “The day people who had never watched General Hospital before in their lives watched a little bit of General Hospital, just to see James Franco. Never forget! Turns out, it’s not very hospital-y, at all, and it’s about the mafia and the art world and a lady having a meltdown in her living room. But also, at least for now, starting today, it’s about Franco, a famous artist whose art is killing people or maybe rearranging them after they die, or something, and whenever he’s on the screen, the piano part from that song “Mad World”, popularized in a cover version on the Donnie Darko soundtrack plays. The best part was at the end, when James Franco reveals his beautiful, glistening face and kisses a lady. Here’s that part. James Franco!”

Watch the video below of “Franco” in action on today’s General Hospital!