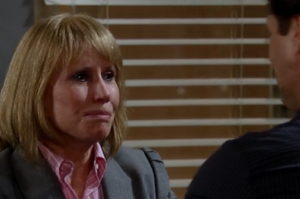 General Hospital has paid homage to its history and its fans under the creative regime of current executive producer Frank Valentini and head writer Ron Carlivati, in particular when it comes to special episodes, and today during the broadcast of the long running ABC soap opera’s 51st anniversary broadcast that held true!

IF YOU HAVE NOT WATCHED THE EPISODE YET DO NOT READ ANY FURTHER AS THIS POST CONTAINS THE REVIEW OF IT AND SPOILERS.

Starting off the show in black and white and paging the names of the memorable doctors and nurses that graced the halls of the 7th floor nurses station and GH throughout its history, quickly the episode brought us to current day with the still venerable Dr.  Monica Quartermaine (Leslie Charleson) who is reeling from the death of her son, AJ Quartermaine (Sean Kanan).  As Monica tries to cope, enter the ghost of Emily Quartermaine (Natalia Livingston) who tries to help Monica stay in the land of the living, even though Monica reveals her sorrow at being the only one left in her family since everyone else she has loved has passed on.

Elsewhere, Carly (Laura Wright) confronts Sonny (Maurice Benard) with the knowledge that she knows that he shot AJ, since AJ told her before he died.  Sonny takes Carly to the hospital chapel to try to reason with her to not tell Michael (Chad Duell) that he shot his bio-father, and to remind her of all the terrible things AJ did to them!

And with that and the use of historic clips, viewers get to recount the tumultuous past of Sonny and Carly starting with Carly losing their baby thanks to AJ, but this Carly is the original, Sarah Brown!  We relive how their hate turned into sexual tension, turned into a relationship and how they grew to love each other.  And in terrific moments played by Maurice Benard and Sarah Brown you felt and knew the depth of these characters feelings.   What a treat it was to see these two powerhouse performers together again.

But the treats did not stop there, next Carly up, Tamara Braun and through the use again of clips, Sonny and the Carly from this time in their lives recount Carly setting up Sonny and their divorce, and how Carly fell apart and suffered a minor nervous breakdown after the “death” of Michael!  How great was it to see Maurice and Tamara in scenes together again, too! It was to say the least, a very clever way by GH to incorporate the Carlys from Sonny’s past.

Finally, it’s back to present day Carly (Laura Wright).  Sonny says, “We may not be right for each other, but we’re it for each other.”  To which Carly replies, “I will always have you’re back, even if our love story is over.”  Next, they recall having “grief” sex, but in the end, Sonny begs Carly to not tell Michael or anyone that he shot AJ.   And again in those scenes it was beautifully played by Maurice and Laura.

Elsewhere during the episode, Lucy (Lynn Herring) makes her big decision and in a very touching scene, she tells Scott (Kin Shriner) that she has chosen to stay in her marriage with Kevin (Jon Lindstrom).

Both Lynn Herring and Kin Shriner were very moving as Lucy tries to tell Scott she wants to be his friend and does not want to lose that, but she is going back to her marriage.  There is also a nod to “51 years” thanks to a send-up of Governor Chris Christie’s bridge-gate where Felicia (Kristina Wagner) reveals how the Port Charles Bridge was closed down!  Bobbie (Jackie Zeman) also appears in the episode, and we find out that Noah Drake has chosen to be with none other than Annie Logan, and not her!

At the of the episode came the big hankie moment for us when AJ, now passing on through the living to death tells Monica, “Mom, thank you” to which Monica says, “Goodbye, my sweet boy.”   This moment was heartfelt and played to perfection by Sean Kanan and Leslie Charleson, who were stellar throughout their scenes.

As the episode comes to its conclusion, AJ is  greeted by the likenesses of Lila, Edward, and his father, Alan. Now being led by Emily, AJ walks up the GH staircase on his way to heaven.

We also have to give props to Maurice Benard, in what was one of our favorite most recent performances by this staple of the series and the women of the Carlypalooza – Sarah Brown, Tamara Braun and Laura Wright.  All in all, this was a very unique episode of the series.

So, what did you think of the 51st anniversary episode?  Which performance did you enjoy the most?  What brought you to tears?  And which Carly did you love seeing the most?  Or, was it the trifecta of all of them?  Comment below!

B&B's Brad Bell On The Return Of Sean Kanan As Deacon Sharpe!