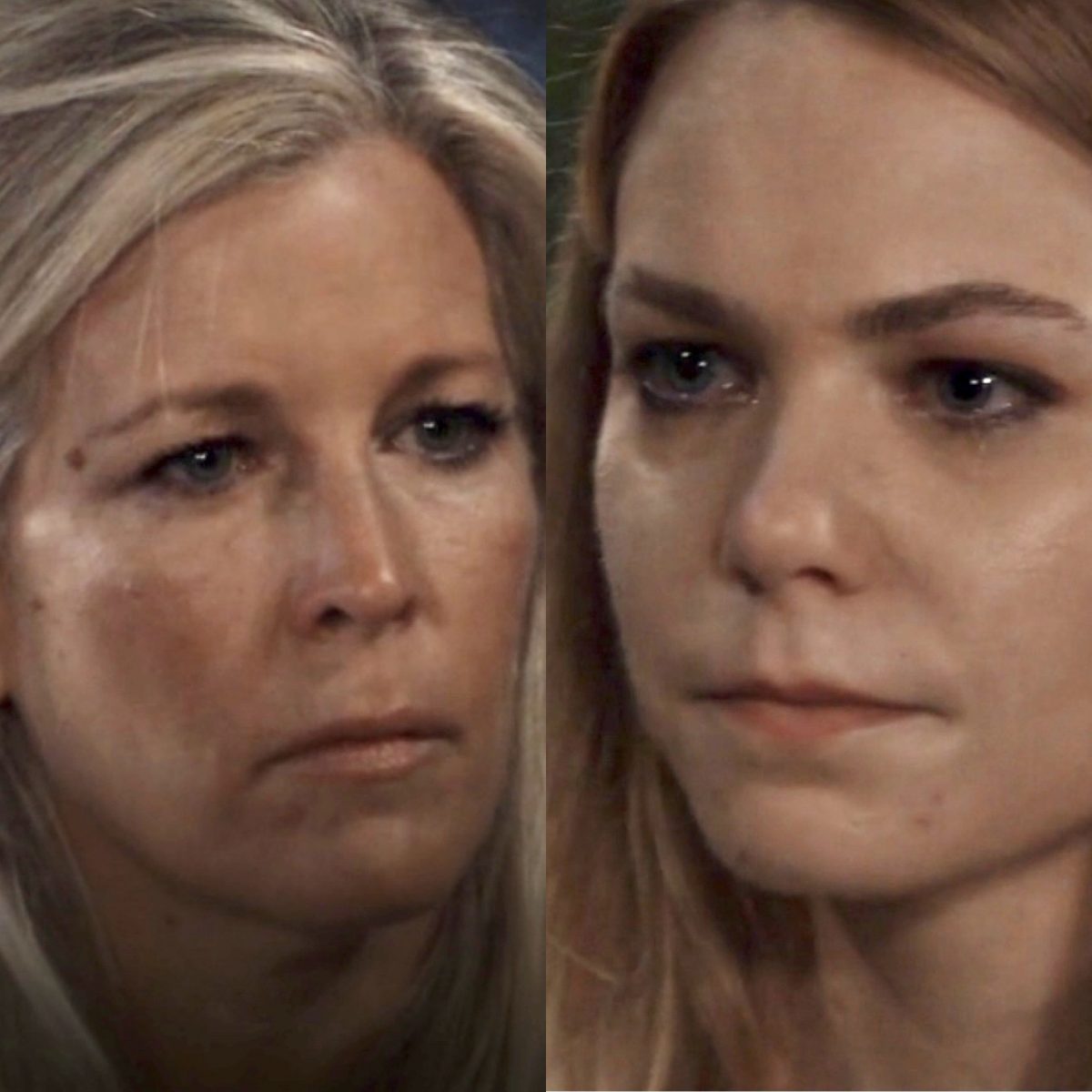 When Chloe Lanier (Nelle) and Laura Wright (Carly) get-together in the ongoing contentious battle between Nelle and Carly you know there is going to be emotion, fireworks, and high-stakes, and on Thursday’s episode of General Hospital, their scenes did not disappoint.

DO NOT READ ANY FURTHER IF YOU HAVE NOT SEEN TODAY’S EPISODE AND PLAN ON WATCHING IT.

First, Michael (Chad Duell) is on his way to take care of Nelle himself and to get his son, Wiley back home safely from Nelle’s abduction of the little boy.  He calls Carly and lets her know he has a lead on Nelle and is going after her.  But Nelle finds the tracking device she placed in Wiley’s stuffed animal which was all part of her plan and realizes things are going south when she is probably already being tracked-down because of it.

Michael gets to the cabin and is met by a vase to the head by Nelle.   But when that does not work to knock Michael out, he demands to know where Wylie is.  He attempts to barter with Nelle that if she leads him to their son, he will promise to keep Nelle in the child’s life.   Then, and once again, Nelle brings up Carly and tells Michael that his mother will never allow that.

Nelle says Michael never stood up for her, but then he tells her – after slitting Brook Lynn’s (Briana Lane) throat and kidnapping Wylie, she is going down and he will make sure Sonny (Maurice Benard) takes care of it.  Michael hears Wiley cry- so he runs into the other room to be with him, while Nelle makes a run for it.

Next, with Jax (Ingo Rademacher) in tow, Carly shows up at the cabin and sees Michael and learns that Nelle got away.  Carly tells Michael, that’s it! This need to end now.  Nelle needs to be stopped!  So, of course, Carly is the one to go after Nelle, while Michael stays by Wylie’s side.

Outside, and near the road and the cabin, Carly comes upon Nelle, and then the showdown begins.  Carly tells Nelle she is going to prison for attacking Brook Lynn and stealing Wylie.  Nelle turns things on Carly and tells her she should have been there for her since they are sisters!  Carly is quick to counter that Nelle kept pushing until she destroys things, something Carly knows a thing or two about.

Carly tells Nelle to finally do the right thing and turn herself in for Wylie’s sake.  Just then, Carly and Nelle get into a tussle and Nelle tells Carly to come get her! Next, Carly hears Nelle’s cry for help and screams.  When she comes upon her Nelle has gone over an embankment, holding on for dear life … or take a terrible fall below.

In true soap fashion, Carly tries to grab Nelle’s hands, but Nelle loses her grip (OR was it intentional to set Carly up for murder?) and she plummets. Did Nelle just die? Did she plan a great escape to blame Carly and ruin her life? We have to tune-in tomorrow to find out the upshot of this cliffhanger.

So what did you think of the end of today’s General Hospital? What do you think will happen next?  Comment below.

Say hello to Morgan while you’re down there Nelle.

Lord have mercy! I hope this is NOT how Nelle goes out. It will another disappointing, narrow story ending of a great villain; just like Shiloh’s ending was disappointing. (And I still believe he could be alive, so the writers could have redeemed themselves if so much time hadn’t passed.) With Nelle, I really wanted to see a who-dunnit. So many people had reason to bump her off and were practically saying so. But we get saddled with a repeat story of the biggest enemy of the villain being at the wrong place at the wrong time. Now, I guess,… Read more »

No, this isn’t how she goes out. This is how she gets injured to the point of needing blood transfusions. You might have noticed she was wearing the half-hearted necklace when she was arguing with Carly. This is mostly going to be the setup for Nelle to be clinging to life and for Jax (why else would he even be there) to notice the necklace and bring Nina in so they can drain her blood.

Satan
As usual you make good sense.I never believed they would kill off Nelle because the big mystery of she and Nina being mother and daughter would be for naught and they have put so much into this SL, the heart necklaces, etc.

She’s not in Hell yet. And you know she ain’t ever going the other direction!!

It looked to me that Nelle deliberately threw herself off that ledge.—-is she so mentally deteriorated that she’d risk anything to get Carly? —even her own death?
Will Carly be accused of pushing her? Another court case? How thrilling–not!! Especially with sainted Carly and her brewding husband.

I don’t think she is dead. Someone will nurse her back to health. She will blame Carly she will go to jail for a little than get out.

Hi, Joyce—-I tend to agree with you…..too easy to be rid of Nelle this way—

I agree but it was dark and maybe the drop is not as deep as you would suspect. I believe Nelle is still alive and that does not make me happy.

A small clarificaton, guys—-I purposely used “brewding” in lieu of “brooding”— you know; he hides behind his “coffee business”. Pardon the inane pun.

I think it will be the end of Nell and Carly will not face charges and it will end up a tragic death. Reason behind it Nell snapped mentally because she couldn’t cope with the coming consequences of her actions.

I watched a small clip, and it was the same repetitive dialogue. Although, both actresses did a great job.

Mark my words, number one, Nelle is not dead and number two, she will find Morgan and they will return from the “Dead” together!

Nelle and her shenanigans has what’s kept me tuning into GH the last year. An awesome soap villain.

Charday…she is also a very good actress, for me the only good thing to come out of the Fluke story.