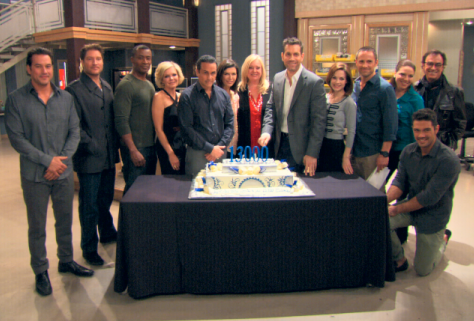 This afternoon the cast and crew of General Hospital took a few minutes out of their work day to honor the series 13,0000 episode milestone of ABC soap opera!

After the cake-cutting, ABC 7’s entertainment guru, George Pennacchio nabbed the busy Valentini and long running series star, Maurice Benard (Sonny Corinthos) outside of the soundstages to talk about their 13,000 episode milestone and what to look forward to in the months ahead during the ABC 7 late afternoon newscast!

Find out what Frank said after the jump!  And congratulations General Hospital another tremendous achievement!

Soap Opera Showdown Finals: One Life to Live vs. Days of our Lives!

Maurice Benard (Sonny is a cornerstone of GH and has dedicated decades to Sonny.. why to go Maurice !!!!

I am happy to hear they are showing GH in the rec room in between Bingo and cracker time.

Good one, Harry!!! Sounds like someone was on a sugar high there. By the way, am I safe to assume that the snappy Sappy “cake crack” came from you, too???? Saw it in my inbox….(excellent observation….) but alas, it did not pass muster from “Mr./Ms. Moderator!” Hey….it happens to the best of us….more often than we would like to admit…. : )

Shay, wish I could claim credit for the ‘cake crack” comment, but alas, it was not me.
I am finding that any time I use the phrase “Sparkle Pony” my comments disappear. I swear this is worse than communism.

I’m kinda, a lil, bit, soured… on all the brouhaha…. doted on FV and RC blech… on the writing of Scrubs…. this couple… my dream couple… coulda woulda shoulda been IN LOVE…. from the get go…. what’s the point now? I will back burner these two… and hope the writers give the fans respect and not pair….. Patrick and Sabrina….. it’s too much of an upheaval… writing is apparently all that… because… these two actors had chemistry in spades… untouchable…. what on earth happened…. shell shocked… till all the firestorm… ebbs… please give Dr. Patrick Drake a whole new direction… Read more »

I know it was big disappointment for Scrub fans, but I think they knew from the get go that Robin would not be on canvas for long, so they didn’t write the reunion the way it might have gone if they knew they had her long term. No sense investing in scenes of how great this couple is if they know they will be tearing them apart in few months. As for Sabrina the way she told the story to Patrick about Carlos, one would think they would write some scenes where Sabrina’s old love for the guy would surface.… Read more »

I think that most of us are pretty nonplussed at this point, Patrick, and seeing Scorpio bidding adieu to Port Charles only compounds the disappointment and disgust! All the stops should have been pulled out to keep that marvelous man on the GH canvas…he’s a glittering gem of colossal charm, and would have been an awesome adversary to Thaao Penghlis’ returning Victor Cassadine. But hey, there are far more important efforts underway, i.e., the continued forcefeeding of “Sabzilla.” Just encountered a Frank quote on another soap website regarding the nurse’s preposterous pregnancy and he called it a “nice shot in… Read more »

Hope this view reflects the future at GH?….Liz, AJ, Dr. O., Victor, Anna, Nik and well, yes more of the mob, but hey, you can’t have it all now can you???? The best part of this photo-op????? (Besides that yummy-looking cake, of course?) No Sabrina! And THAT is truly the icing on said baked good!!!!! Making a wish that it’s an eventual omen, even if not an immediate one…..At any rate, congrats GH on marking such an impressive milestone!!!!

IA about no Sabrina being in the picture. Her character is horrid, and she should leave town like Ellie and Spinelli. Heck…where is Epiphany’s storyline-how come we don’t know anything more about her than her being the mother of Stan?

I kind of liked Ellie.

Excellent question, Sharonda! I love Epiphany….she always makes the most of her far too limited screentime, and is exceptionally talented. I have never understood why her character was not expanded to include relatives…so she lost a son, that doesn’t mean she shouldn’t have any other family? I repeatedly suggested that Felix should have been her nephew….that would have immediately given him credibility and they could have had a wonderful relationship around which to build a more substantial backstory for both of them. But instead we got him as an annoying, petty little busybody who is nothing more than Sappy’s lapdog…which… Read more »

13 is and has been an unlucky no. for me in anything… Hopefully, its just the opposite for the show…lol…just wish there werent any ‘Houdini’ disapearing acts with certain characters like A.J. for instance…he was shown starting to remember the night of Connies murder…then suddenly not shown…i know its a large cast and actors cant be shown everyday but A.J.s story about Connies murder should be more front and center, and should be solved during at least by Feb. sweeps…i know it looks like Ava done it but i like Mary SFs idea better that it was Alice since she… Read more »

The nurses ball again…great…just wish they wouldve taken my suggestion from a year ago and made it a 2 hr. live real fundraiser kinda like the Jerry Lewis telethon! Cant believe its almost been another year!!! Time flies when your having fun!!!

At the 2015 nurses ball…on stage Patrick is tenderly holding Sabrina in his arms…and as they gaze lovingly into each others eyes, Patrick sings to a happily sobbing Sabrina, with the love he has felt for no other, ”You’re Having My Baby”…lol

That would have been nice. Instead, they made it Disney on Ice starring Sparkle Pony.

It’s so sad to see Sean Kanan there when rumors are flying that they are going to let him go. I bet they didn’t even let AJ has some cake just like the guy from the movie Office Space.
If they are stupid enough to let Sean go, I hope he at least gets to keep his red stapler.

GH is on fire and always entertaining with some kick butt acting..In my opinion the best acted show in daytime..I am so happy it got “renew” by ABC..Here is to more 13,000 episodes!!! AJ and Carly have some serious chemistry and I hope the writers sense that and get a story going there and lets wrap up the Kate/Connie murder and hopefully it is not Ava, since this character is so deliciously entertaining!! Maura you rock!!

Go, GH! I still don’t get Sonny’s popularity. Women want to save “bad boy” Sonny?? Makes no sense to me.