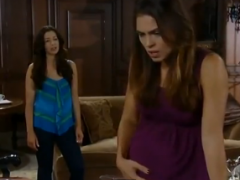 The Britch strikes again! But in an oh- so awesome way for fans of ABC’s General Hospital!

So what do you think of GH’s strong ratings showing last week in the key female demos? What do you think about it being on pace to be its strongest season in five years?  Great way to finish out its 50th anniversary season? What has been your favorite part of all the baby drama surrounding the birth of Britt’s baby and Maxie’s (Kirsten Storms) baby? Comment below!

Sara Gilbert Shares Emotional Journey Of Her Sexuality & Public Perception On THE TALK!

The Brittch didn’t go into labor until the very end of Friday’s show Sept 6th so I am not sure how the birth of her baby had anything to do with the increase. The Thursday Sept 5th eatured the two court proceedings with Franco and AJ and the Brittch scenes were Sabrina calling her out on her lies to Patrick about the paternity of the baby. The actual labor and birth happened the following week which is the week of Sept 9th. I have really enjoyed the Maxie/Lante baby story though and if a baby had a responsibility for the… Read more »

BRAVO !! FV & RC !! and to ALL the cast of excellent Actors, Writers and Directors !!

Every day is great show! All I can say is yippee! It’s wonderful to see ratings for a soap opera doing so well.

General HOTpital is the best soap right now…i just wish they stop rushing patients to the tenth floor…Sabrina shouldve took Britts baby to the emergency room on the ground floor and not up to the tenth floor where nurse Felix instructed her to take the baby to even yet another floor…and Britt shouldve been there too!!!

@jimh (litb)….You have to realize “Sappy’s” built-in, one-track “GPS” primarily directs her to wherever she most believes Patrick could be at any given moment….that is always first and foremost in her mind, locating her “object of obsession.” That’s why she directly went to Drake Jr.’s floor of operation…the fact that she had a gravely ill newborn on her person was only of secondary import compared to finding her “loverboy!” LOL….

Just wait.. with the rating getting so much higher…. ABC will be cancelling it soon just like they did to OLTL….

Debbie Downer, no ABC will not be cancelling GH!

ABC will not be cancelling GH any time soon! We have to have a positive not negative out look. GH IS ROCKIN HOT!!! I can’t wait to see more. I enjoy that much…. That’s entertainment!

I actually look forward to watching GH again – and had stopped completely during the Guza character assassination years.

Glad to see I am not alone.

The less I see of Freaky Franco and Kiki the better….they have been on screen a little less….my viewership therefore, has gone up. Could others feel the same way?

I certainly do. I never watch anything with Franco because the storyline is so offensive. I turn to something else.

This is good news for GH, of course, and its fans. And it shows the anniversary excitement continues. But tghis is good news for all daytime dramas. Those who claimed death of the soap opera in recent years are being proven wrong. Good writing, surprises, suspense, and attention to history and connection to everyday, coupled with top performances will keep us tuning in tomorrow and tomorrow and tomorrow.

Sadly, I wish I could be celebrating in Oakdale and Springfield and Bay City, too!

Congrats to everyone at GH! You all do such great work and you really deserve the success. Looking forward to the fall stories (Robin’s return, etc.).

Way to go GH; by far the best soap at this time!!!

Great news!!! Itshould keep on building with all the comebacks… Robin and Robert!!!

The Damian/Maxie baby story line was riveting. However I was deeply disappointed with the current (hopefully not final) solution that Dante & Lulu kept the baby. This selflessness on Maxie and Spinelli part might be a bit more convincing if Lulu and Dante did not talk down to both Damian and Maxie quite frequently. There were a few points when they treated Maxie like public enemy #1 that I was just darn irritated with the direction of the events. Irritated enough not to watch until I read that Maxie and Damian get their baby.

Lulu’s lack of compassion for Maxie’s feelings was typical of her character – spoiled, selfish brat. I, for one, can’t wait for baby “Georgie” (NOT “Connie”) to be reunited with Maxie and for Spinelli to have the child he pines for.

The writing and producing team that made “One Liffe to Live” so great, Mr. Valentini and Mr. Carlivati are the reason for the ratings gains. . They can tell a story that respects the show’s history which is key to holding onto long time viewers. I mean writing the initials in blood on the floor next to Connie/Kate – who remembers that exact thing happening to poor beloved Diana Taylor to frame Annie back in the late ’70s? Good stuff Ron! Also thanks for th scenes with Leslie Webber! I mean she WAS the center of that show when it… Read more »

When I read posts like this I can only conclude that they’re a plant from a studio employee.

I assure you I am no “plant” but a long time soap viewer. I read your comment and I assume you are not a true soap lover….too bad ! It’s a lot of fun!

Congratulations GH! I’m 32 years old and have been watching the show for 32 years (thanks mom!). So even though I can’t remember anything before spotty bits of the early days of Frisco and Felicia, I’ve always loved spending time in Port Charles regardless of the ratings highs and lows. Always good to hear that the show is thriving. I hope it lasts another 50 years!

A certain couple was on 70% of the episodes and had the most airtime, Jasam, is gone. That’s the biggest change in the last year. Those airtime guzzlers couldn’t get higher ratings on their wedding and only posted good numbers on the overall characters departure. They also got the lowest ratings in the shows history, while having the most airtime. To not heavily attribute this to a certain character’s departure would be wrong, bacteria gone.