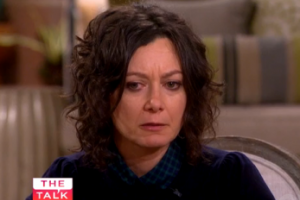 Today on season four premiere week of the CBS hit afternoon series, The Talk, it was co-host Sara Gilbert’s turn to reveal a shocking secret or something she has never told anyone publicly and that the ladies of the panel, also did not know.  Sara shared a very emotional story about struggling to come to terms with her sexuality and being public about being gay.

Sara revealed that when she dated her former co-star Johnny Galecki while working on Roseanne. She related that the y would make out and she would feel incredibly depressed.  Sara felt like she was hurting him so she told him she was gay. He never told anyone, and Sara also kept her sexuality a secret throughout her years on Roseanne. She also said that she was dating a woman 18 years older than her during this time.

Gilbert confessed doing The Talk has helped her overcome her fear of being public about being gay, but she reveals that part of her is still afraid there will be repercussions when she shares personal information, like her recent engagement. “When I talk about my sexuality on the show or in public, I still feel really scared. I’ll try to act confident or make jokes of it. There’s still a piece of me that goes ‘what is this costing me in my career?’”

Sara went on to say, “I want to live a true life. Beyond that, we do often say things like “it gets better” – and it does get better. I have an amazing life, but there can still be a struggle with it, and that’s OK. There can be a part of you that doesn’t want to be different or feel scared. And that is more important than any of it.”

She concluded with this very touching moment stating, “Bringing it back to Johnny, when I called him (to let him know she would be discussing this on the show today) he said: ‘I love you and I think it’s really important. I’m so proud of you. If you want, I’ll be there with you and I’ll hold your hand.’

Watch the segment below of Sara’s revelations! What did you think of it?  Were you touched?  Could you relate?  Share your thoughts!

Wow. Sara Gilbert was so lucky to able to trust Johnny Galecki who still supports her to this day.

Sara Gilbert. Common Thread. “Shared”. “Holding THE secret.” Feeling – Different. it does get better with time. I’m thrilled with who I am…. Fear for those who continue to struggle with identity. Bullying… homelessness…. suicide…. ALL REAL. Acceptance across the board… for that child’s world… till he’s capable of taking care of his or her self. is what I stand for…. I say.. if you can deal with every facet of your life… and not let your emotions… be it negative or positive “control” YOU. then.. you are well on your way… for a semblance of life on which to… Read more »

I can relate with what you wrote. it’s that way of living that “can” haunt you. and, I can’t find fault in that… it’s our upbringing… and the onslaught of trials and tribulations… that we went through. I have to use the word, Trepidation…. the constant questioning… of one’s will…. the thought processes would be so jumbled… and in overdrive… “…who, …what, …where,…when,…why” everything under the sun… anyway… back to trepidation…. dang! talk about anxiety levels… through the roof…. I just went home not too long ago… and i’m 50 years old… and still… to this day… my home town…… Read more »

I really think her message is very important. Because it’s tough being homosexual in this world. The images/media doesn’t train our brain for it and it can be a tough day to day battle. “It gets better” is a great message for teens thinking about suicide. But it’s a tough ride for some..and it’s nice to know that some, even celebrities, struggle with the process.

” But it’s a tough ride for some..and it’s nice to know that some, even celebrities, struggle with the process.”

you know… from personal experience….

it’s a flight plan that ultimately is by yourself….

and… geez! knowing that someone(s) care…. and you’re not alone.

is comfort… and feeling

i should add.. that it’s opening our conscious mind… that we can avail ourselves to promote goodwill.

I don’t know if the actresses receive the feedback, but bravo on all the personal “secrets” of the ladies of “The Talk”. I’ve watched each 1 each day and I just enjoy them more. They’re more than just tv personalities, but ppl w/insecurities and pain, just very seemed very brave and personable to show that side of themselves and share. Love Sara Gilbert–1st as Darlene, caught her on “Big Bang” and now on “The Talk”. I loved her and Johnny on “Roseanne”. Darlene and David:) Really sweet to hear they’re dear friends and support each other to this day. As… Read more »

As for me Ms. Gilbert, I don’t care if you’re gay or straight, you made me laugh on “Roseanne” and when u guested on “Big Bang”, not to mention on “The Talk”. You pop on screen and your talent shines

That was sweet what Johnny said. Good luck to them both.

LOOK at the TWO Pictures… of the SAME PERSON.

for acceptance… across the board…. till all 50 states equally share our Lives.

with the overturn of Prop 8 and CA legalizing marriage… I do, for me… see a light at the end of the tunnel…… over the horizon… I hope… for those that follow… and for the peer advocates who valiantly press onward and upwards…

One highly effective, very heartfelt, truly touching moment for the talk show genre, but that said, I wish “As the World Turns” was still in the time slot.

outside of said topic…

I would relish Oakdale… and My world would turn once again.

I think Sara is so lucky that she was dating someone as understanding as Johnny. Some guys could have gotten angry at her, and questioning their own virility, they might have tried to prove it by raping her.
I fully support Sara, and am so glad she has happiness in her life now. No one should have to hide their sexuality. Whether they are gay or straight. I hope that makes sense. Sometimes, straight girls/women get stereotyped by the way they look and it affects their careers, also. It’s just hard to be a woman.