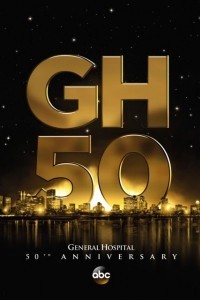 General Hospital will be featured in its very own special edition of ABC’s 20/20 on Saturday night April 6th in honor of the series golden anniversary!  Previously, we learned that Kelly Monaco (Sam) was delighted to be a part of the special when she was interviewed, but today in an official press release from ABC, more details have emerged including that Katie Couric will be the anchor for the hour that looks into the legacy that is GH, with several interviews with series stars and more!

Official press release:  “For 50 years, General Hospital has entertained and amazed its viewers with unforgettable romance, action and cutting-edge story lines.  To celebrate the pop icon’s golden anniversary, Katie Couric and “20/20” travel to the fictional town of Port Charles to experience first-hand the passion, intrigue and adventure that has made the daytime soap opera the longest running scripted drama currently on television.  The hour special will feature interviews with fan favorites including Tony Geary, Genie Francis, Maurice Benard, Jack Wagner, Rick Springfield, many other cast members, and Executive Producer Frank Valentini.  20/20 goes behind-the-scenes and offers a visitor’s guide to Port Charles and its residents, and show how love in the afternoon has changed dramatically.

The special will also look at how General Hospital has been the launching pad for many actors including Demi Moore, John Stamos, Kristin Davis and Richard Simmons, as well as for chart-topping music hits; and how it has led the way in cultural stories like HIV, teen sex, working moms, birth control and breast cancer.

So soapers, what do you think of the 20/20 special honoring General Hospital? Excited?  About time?  An honor?  Weigh-in!

Jason Thompson Chats On Patrick and Sabrina, A Robin "What If" & General Hospital's 50th!

Thanks so much for the heads up setting the DVR right now so I don’t forget.I’m sure the show will be Amazing!

And i dont care what anyone says, we have FV and RC to thank for all this!!!

Totally agree, no e of this would of happened under jfp and guza, there’s just no way I can picture it so thanks fv an RC

Totally agreeing that FV & RC made all this possible because surely under JFP & GUZA all this that is taking place would of been non existent!

I’m excited to see soaps getting press. I think they are a hidden gem some people don’t admit to watching. Maybe some prime time hope will get more viewers. In the age of DVR you don’t have to be at home during the day to be a soap fan.

can not wait General Hospital is the best it has been in a very long time that is because of FV and RC. my question was it only 1 hour should be 2 hours

Is this a sign of ABC showing their love for GH???

20/20 special…..on a SATURDAY???? No one will be home to watch. Ratings are generally paltry on a Saturday night, and no one even ever really counts them except for SNL.

You can always DVR the program if you are not home.

If I recall, The twist of Fate special in special in Dec 1996 was on a Saturday.

GH is my all time favorite soap. So despite of my boycott I will support GH by watching the tribute. I just wish Ms. Couric wasn’t doing the show. ABC, especially Sweeney, has to know GH fans resent still resent her for demanding and getting GH’s 3p time slot.

I’m for anything that promotes the soaps. I’m delighted ABC is dedicating an hour of 20/20 to GH. It is well deserved. Katie’s on contract to ABC so I’m sure she has commitments to the network she has to fulfill.
I don’t care who’s hosting, I will be in front of my tv on Saturday night April 6th. Can’t wait!

Not a fan of Katie Couric! But I will watch it or record it. Probably record it my husband would never watch this. He’s not a soap oprea watcher.

I am very happy GH will have a 20/20 special. They deserve it. Why are they having Katie Couric Host???? Until she realized she needed GH for her show to surrive, she was ready to send GH up the river with the rest of the soaps!!! Maybe Katie and ABC finally understand they need GH is their line up. Lets face it all of the replacement shows stink including katie’s snore fest. I would rather watch a slice of wonder bread on the screen than her show!!!! When are they going to realize the soaps deserve RESPECT and after 50… Read more »

I will watch it, but find it very insulting that Katie Couric is the host. I don’t care if she has a contract and obligations with ABC, someone should’ve known better than to let her be the host! She’s the reason they had to move the time slot that they had for almost 50 years!!

Well one god thing about the time slot , GH I don’t have to leave in the middle to start dinner.
I have watched a few Katie’s shows ,only when she has someone on, I want to see. Not often, I JUST WONDER IF SHE KNOWS NOW, Soap fans have loooong memories. At least I do. ‘

I will set the dvr for the show, Looking forward to all the parts except for the reasons I hated it The mob with the unholy three.

Seeing all these favorite actors from the past and how great they are makes me wish they could stay around.

Not to crazy about Katie Couric anchoring this Gh special. I will record this on my dvd player/recorder………