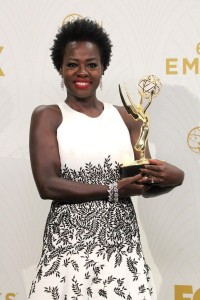 Sunday night during Fox’s presentation of the Emmy Awards, How To Get Away With Murder star Viola Davis took home the gold for her performance in the Lead Actress in a Drama Series category.  The win was historic.  It was the first time an African-America woman has won in this category in this the 67th time the Television Academy have been handed out.  The awards honor the best in the previous primetime television season.

Davis’ speech has been heralded as the best of the night.  It paid tribute to other African-American actresses and how far TV has come when Viola delivered these words:  “In my mind, I see a line. And over that line, I see green fields and lovely flowers and beautiful white women with their arms stretched out to me over that line. But I can’t seem to get there no how.  I can’t seem to get over that line.’  That was Harriet Tubman in the 1800s. And let me tell you something:  The only thing that separates women of color from anyone else is opportunity. You cannot win an Emmy for roles that are simply not there. So, here’s to all the writers, the awesome people that are Ben Sherwood, Paul Lee, Peter Nowalk, Shonda Rhimes.  People who have redefined what it means to be beautiful, to be sexy, to be a leading woman, to be black. A nd to the Taraji P. Hensons and Kerry Washingtons, the Halle Berrys, the Nicole Beharies, the Meagan Goodes, to Gabrielle Union. Thank you for taking us over that line. Thank you for the Television Academy. Thank you. ”

However, immediately following the speech, General Hospital’s Nancy Lee Grahn (Alexis Davis), who is very active and political on Twitter, took issue with the words related in Viola’s acceptance speech that was clearly resounding as an emotional moment to viewers around the world watching the live ceremonies.

Grahn began sending out tweets which included: “I wish I loved Viola Davis speech, but I thought she should have let Shonda Rimes write it.”  She responded to a follower adding:  “Try being any woman on TV.  Wish she’s brought every woman into the picture.  I wish I’d get the opportunity to play the roles she gets.”  Grahn also tweeted:  “Viola Davis winning lead actress Emmy’s historic. My upset is acting awards don’t fix racial injustice. As an actor I see how irrelevant we r.”  Following with:  “I never mean to diminish her accomplishment. I wish I could get her roles. She is a goddess. I want equality 4 ALL women, not just actors.”   In response to another follower, Grahn added:  “I do 2. I think shes the bees knees but she’s elite of TV performers. Brilliant as she is, she’s never been discriminated against.”   In addition, there was one tweet that was deleted by Grahn, but captured by Buzz Feed: “I’m a f–king actress for 40 yrs. None of us get respect or opportunity we deserve. Emmys not venue 4 racial opportunity. ALL women belittled.”

After receiving a thrashing on Twitter, Grahn began to make efforts to apologize tweeting:  “I apologize 2 anyone who I offended. I’m women advocate since I became one. After reading responses, I hear u and my tweet was badly phrased.” She then added:  “Schooled. As surrogate 2 last democratic presidents I thought I needed no lesson in equality. I was wrong. Please accept my apology.”   Nancy followed with: “I apologize for my earlier tweets and now realize I need to check my own privilege. My intention was not to take this historic and important moment from Viola Davis or other women of color but I realize that my intention doesn’t matter here because that is what I ended up doing. I learned a lot tonight and I admit that there are still some things I don’t understand but I am trying to and will let this be a learning experience for me.”

As the vitriol continued on Grahn, the Daytime Emmy-winning actress was up very late into the wee hours of Monday morning trying to rectify the matter.  Nancy then tweeted: “I’ve taking a whoopin 2night and as u can see will rightfully stay up all night to talk to you.”  Next Nancy tweeted:  “3am.Tried 2 respond 2 u with love as I should, Gotten mostly condescension & vitriol.  Tomorrow, new day. Wont begin it with anything but love.”   Finally:  “30 yrs an advocate 4 human rights & now I’m a racist. Color me heartbroken. Twitter can bring out the best & sadly tonight the worst of us.”

Even Oscar and Emmy winner Patricia Arquette jumped on the Grahn backlash adding: “Stop that right now.  It is a venue for whatever the WINNER wants to say.  It is her win.  She is saying something that is proven.”    This morning many mainstream media outlets from USA Today, The Wrap, TV Guide, and US Weekly are all reporting this Twitter firestorm from last night. Nancy was even trending on Twitter after Viola’s victory for her comments and the ensuing backlash late Sunday, and on into Monday morning.

So, is this another case in the dangers of Twitter: the good, the bad, the ugly?  Were you offended by Nancy’s tweets pertaining to Viola’s historic Emmy win and the #HTGAWM star’s speech?   Were you touched by Viola’s acceptance speech?  Do you think now that Nancy has served up apologizes on Twitter; it’s time to move on from this?  Share your thoughts in the comment section below!