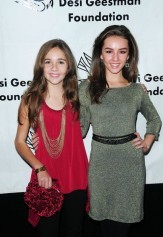 The 32nd Annual Young Artist Award nominations have been announced honoring the brightest young actors and performers in show business.  The annual ceremonies are brought to you by the good folks at The Young Artist Foundation. And, in the Daytime TV Series categories several of the younger set of General Hospital and Days of our Lives scored big.

The Young Artist Awards will be handed out Sunday March 13, 2011 at the Sportsman Lodge Hotel’s Empire Ballroom in Studio City, California.  View the complete list of soap opera nominees after the jump. And, congrats to all from On-Air On-Soaps who garnered a nomination!

BEST PERFORMANCE IN A DAYTIME TV SERIES
Young Actor
Field Cate,  The Young and the Restless
Mick Hazen, As the World Turns
Dylan Patton, Days of our Lives

BEST PERFORMANCE IN A DAYTIME TV SERIES
Young Actress 12 and Under
Haley Pullos, General Hospital
Mackenzie Aladje, All My Children
Danielle Parker, All My Children
Lauren Boles, Days of our Lives

Ray MacDonnell & Lee Meriweather back on AMC in upcoming episodes!

I have been wathing for years