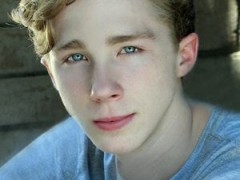 Nominations were announced Friday morning in the categories og motion pictures, television, voice-overs, live theatre, web series, DVD’s and short films for the 37th Annual Young Artist Awards.  The ceremonies with the winners announced will be held on Sunday, March 13th at the Sportsman’s Lodge in Studio City, California.

General Hospital performances landed two major nominations.  In the category of Best Performance (by a recurring Younger Actor) in a TV Series ages 14-21, it was Joey Luthman, who brilliantly portrayed the young Luke Spencer in the series 52nd anniversary episode that landed in one of the final slots.  Luthman will go up against Matt Cornett Bella and the Bulldogs, Myles Erlick The Next Step,  Nicolas Fontaine 30 Vies (30 Lives), Quinn Lord The Man in the High Castle. and Richard Walters Degrassi: The Next Generartion.

In the category of  Best Performance in a TV Series (Recurring Young Actess) 13 years and under, it was GH fan favorite, Brooklyn Rae Silzer (Emma Drake) who is in the running against another young soap actress, McKenna Roberts, who plays Mattie Ashby on The Young and the Restless.

From a record number of 650 submissions across all categories, the nominations revealed a cross-section of young talent.  For the final round of voting 25 YAA voters will review all submissions and vote for one nominee in each category as their winner.

The results will be send to the YAA accounting firm and the results revealed during the live ceremony. To view the complete list of nominations in all categories click here!

So, what do you think about the nominations for GH’s Silzer and Luthman? Y&R’s Roberts? Share your thoughts in the comment section below!

General Hospital's Maurice Benard and Laura Wright Talk CarSon, The Corinthos Clan, Mutual Admiration, And What May Lie Ahead!

Brooklyn is heads above all the others!!!

I applaud to my favorite young actress doing great Job and she got big help from Jason Thompson was her on screen tv dad to teach her how to becomes actress , I feel graceful happy Jason and Brookyln are very remarkable teamwork, I watched them sing together for Nurses Ball and emotional inside to play act together as father/daughter. My last time to watch them leaves the scene made me cry on Jan. 7 .. Thank u for entertainment us

Brooklyn deserves to win this. She is unbelievably talented for her age and adorable to boot.

How the hell did McKenna Roberts win out over Alyvia Aly Lind who plays Faith on Y&R?? And who also played Dolly Parton in her movie??
Un-frickin’ believable!

YOU ARE SO CORRECT…….HORRIBLE SITUATION..I DIDNT EVEN KNOW WHO SHE IS…..ITS NOT THE MOST DESERVING BUT IT IS WHO YOU KNOW…

I had to keep saying..Mattie Ashby..lol. I don’t think that young girl has ever said two sentences on The Young and The Restless!! Crazy!!!

Brooklyn is a superb and talented actress and she deserves to win in this category of best performance of younger actress.

Young Luke and Emma run away with their awards! Nothing personal but that little girl from Y&R was barely on and not nearly as sharp is little Emma Drake! [I hope Jada Smith doesnt read this!]

go Brooklyn. She had me with tears when she wanted her mommy. The child ids so natural. She is talented and I hope she wins. I don’t know the others. good Luck Brooklyn.

Brooklyn and Joey gave superb performances! Best wishes to them! They’re so deserving.