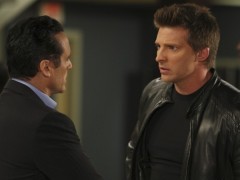 General Hospital’s Steve Burton revealed during his interview on the new On-Air On-Soaps Podcast that something kind of shocking is set to happen to Jason.  Burton previews, “I know that Jason is going to make a pretty crazy choice in the next month or so, but it’s like you would understand it.  We will see what it is.  That is all I can say.”   The soap star also reminded listeners that Jason also has another battle looming on the horizon, so the mob hit man has to be careful not to oft the wrong person because one of Sonny’s knee-jerk reactions. “Remember we have the looming “Franco”, and if I do kill somebody, then he is going to kill somebody innocent.  We might not have ethics, but we have our own code of the ethics ,so we are trying to follow this code.”

Burton also weighed in on the Drew Garett/Chad Duell, Michael Corinthos switcheroo that will finally take place on-air this coming Monday, April 19th.  “First of all, when anyone loses a job it sucks for anybody, but when it’s someone on your show, and one of your own, its kind of sucks twice.  Drew was a great kid, good actor, and the red tape that goes on upstairs I don’t really get involved with.  When you are dealing with anyone’s job that is s not for us ( the actors) to know.  It’s for them to know until that day, I guess. But it is always a hard position.  It was hard how Drew left and probably was not the best timing.  When Drew got here he was thrown into the fire and had some great scenes with me ,and Maurice Benard, and Laura Wright.  Now Chad Duell is coming in of the culmination and the pinnacle of the story. Chad is a great kid and can act. It s always odd switching anyway, i.e. from Lucky to Lucky to Lucky back to Lucky. It’s a lot of pressure for Chad to come in under in the middle of a big story, and people not wanting to like him. He  has done a great job so far. So I know at first people have their opinions, and closed arms to somebody, but so far I can tell you he is doing a really good job.”

Steve will be at the Stagecoach Festival in Indio, California next weekend with the other stars of ABC Daytime meeting the fans, while the top stars of country music including, Keith Urban and Sugarland will be entertaining the throngs on the main stage.

Make sure to listen to the complete interview with Steve on the new podcast!

Wow, is Jason going to choose to be a father to his child??? I doubt the people in charge will allow that unless said child is taken from his mother.

The craziest ‘choice’ Jason has made was taking that woman back after what she did to his son! THAT was the beginning of the end of GH for me. This version of JM is NOT a likeable or rootable character.

Jason needs to man up and be a father to HIS son. This crap with mykill makes me sick when he has a child of his own he SHOULD be concerned with.

Wonder if the IIC realize how much they’ve turned fans away from this character in the past two years?