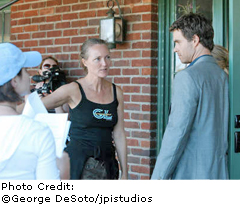 “GL’s” now former executive producer Ellen Wheeler chatted with TV Guide Magazine’s Michael Logan in a new interview out today.  Wheeler gives insight into her thoughts on how “GL” ended, what befell the longest running show, Otalia’s storyline, and this banter below between the interviewee and the reporter! In the conversation, Logan talks to Wheeler about the new production model. Wheeler says it was done for budgetary constraints but Logan is quick to point out that this former EP, said something different in 2008 on the matter.   Here is the excerpt below!

The new production model obviously didn’t save GL but do you think other soaps will in any way benefit from what happened here?
I think we achieved a level of nuance and naturalism that is to be admired. But I want to stop you: That’s a little bit of a misnomer there, because [the production model] did save GL for a year and a half.

I’ve seen you quoted elsewhere saying that same thing, and I don’t get it. When this new production model was launched I clearly remember it being promoted as a way to move GL into the future, using information culled from research groups about what today’s viewers want to see on their soaps. It was not stated that the show would be cancelled if you didn’t go with this production model.
I can tell you absolutely that it kept the show on the air. We could not have stayed in the [previous] model with the budget cuts that came down, so something had to change. And the change was going to have to be drastic and enormous. I’m not saying it had to be this exact model, but this was the one we came up with and we had to come up with it pretty quickly. But without taking those budget cuts we were going to be cancelled.

[Logan note: Okay, I’m not that nuts! I went back and looked at my interview with Wheeler in the February 25, 2008 issue of TV Guide Magazine, in which she told me that the switch to the new production model followed a two-year viewer research project conducted by Procter & Gamble. Here’s what she said: “Our audience has been very clear to us. They don’t like the nonreality of soaps—the fake grass, the fact that people in Springfield never seem to go to work or actually do their jobs or take care of their children. They want the stories and characters they love but with the same sense of reality they get from Grey’s Anatomy and other nighttime shows.” Wheeler then ended the interview with: “This is not a desperate survival move. This is a creative, financially efficient way to move soap operas into the future. GL has always led the way.”]