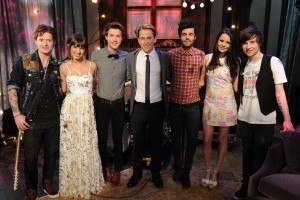 RCA recording artist and American Music Awards winner Hot Chelle Rae stopped by the set of All My Children yesterday  in Stamford, CT for a special performance.

In the scene, AJ Chandler, played by actor Eric Nelsen, asks Hot Chelle Rae to make a special stop to Pine Valley to sing their brand new single “Hung Up” as a surprise for his best friend Miranda Montgomery, played by actress Denyse Tontz. Hot Chelle Rae is AMC’s first musical guest. The episode is slated to stream on Thursday, May 9!

“We’re pumped to be performing on All My Children.  It’s such an iconic show that bridges our parent’s generation with ours. Now that the show is online, we can reach even more people with our music. All of our fans have been loving the song, and it’s cool for these characters on the show to represent our fans,” said lead singer/guitarist Ryan Follesé.

Winners of the 2011 American Music Awards for Best New Artist, Hot Chelle Rae continues to make their mark in the music industry. Their sophomore album, Whatever, featuring the mega-smash hits “Tonight Tonight,” and “I Like It Like That,” sold more than 6 million singles. “Hung Up” is the first single released from their upcoming album which is due out later this year on the RCA label. During 2012, Hot Chelle Rae spent much of the year on a worldwide headlining tour and support dates with Demi Lovato and Taylor Swift. On April 1, Hot Chelle Rae premiered their ‘Hung Up” video on the website, VEVO. Hot Chelle Rae is lead singer Ryan Follesé, lead guitarist Nash Overstreet, bassist Ian Keaggy and drummer Jamie Follesé.

What do you think of Hot Chelle Rae performing in Pine Valley?  Like it?  Weigh-in!

Chrishell Stause Joins The Cast of Days Of Our Lives!

These real life musical acts are a great idea…but its nothing too new! I still think PP could succeed much better if they made two versions of each soap…one that is edited and removes the f bomb ect. and graphic sex and nudity for those who dont want it, and an unedited version for those who do. PP wins and so does all the fans!

The idea of showing two soap versions would appease fans on opposite sides of the content debate plus i feel it would also be good for ratings as well because it would attract more fans, especially those who oppose the addition of certain curse worse, nudity and graphic sex scenes. This way both sides can enjoy the show we fought so hard to keep!

Most recent funny soap line…when A.J. on gh told Tracy he owned the name rights to pickle lila…sound like an inside joke about the debate over the use of OLTLs John, Todd, and Starr on GH…now thats funny! LMAO!!!

Who? Just bring the shows back.. i’ll fast forward past the crap passing as music. Don’t wanna sound like an old foggie, but music died for me about 8 years ago. I know they are making stuff and passing it off as music, but I find music from the 90s, 80s, 70s vastly superior to the crap today.. but then again those people had talent. Music was about something then, and not merchandising.

I new there would plenty of good music on the soaps.. That was their plan 1st time around.
PP, their business is mainly handling huge music stars/bands..
Most likely that is where most of the many came from to take on AMC and OL ..

It is money in PP pocket as they will offer the downloading of the songs probably for .99 a download..
They will continue to promote their stars on the soaps, a great combination!!!

I think the more music the better! I think it’s a great showcase for musicians.

I love that these shows are not going to be the same old tired dog. And I wish people stopped complaining about the additional profanity and sex scenes – these shows were never chaste to begin with. I find it funny that it’s NOW that people are starting to get riled up. I say do whatever you have to do to have these shows stay on and more importantly, bring in new, younger viewers.