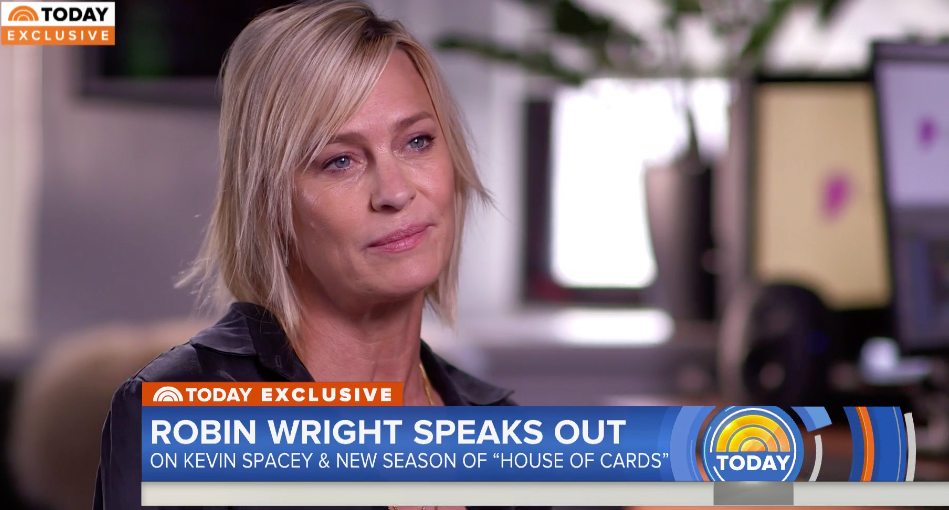 After months of no one hearing from the cast of the hit Netflix series, House of Cards, Robin Wright has come forward in an exclusive interview with Today’s Savannah Guthrie, obviously to promote the series upcoming final season without Kevin Spacey.

Spacey was removed from the series after accusations of sexual misconduct surfaced, and continued to surface.  In her first interview on the subject, Wright said of her former co-star, that she and the cast,”were all surprised, of course, and ultimately saddened” by the events that transpired.

As for her relationship with Spacey, Robin said they were co-workers who were “respectful” and “professional” of each other.  She went on to say that the two of them have not spoken since the scandal rocked the show and that she didn’t even know how to reach him at this point.  She added: “I didn’t know the man. I knew the incredible craftsman that he is.”

Guthrie went on to ask Wright if she has ever been sexually harassed in this #MeToo movement engulfing the nation and the workplace, to which she answered that she had, adding: “It’s about power, and once you overpower someone, that person then becomes vulnerable.  And this last year, I think, has shined a light in a new way to allow us to start a new conversation.”

Watch Wright’s interview below.   Then let us know your thoughts on the direction the series is going this season without Spacey, which has Wright’s character of Claire Underwood becoming the President of the United States via the comment section below.

Personally I do not think it is fair to put Robin on the spot why do the media have to keep on and on about things? I thought she answered the only way she could just constantly got to keep the pot stirred up.