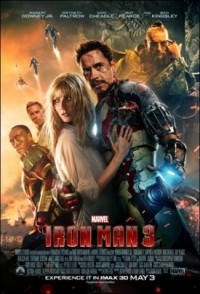 Now here’s a bit of interesting trivia for movie and soap fans!  Let’s start with some facts!  This weekend Iron Man 3 opened to blockbuster numbers in the latest edition of the Marvel superhero’s adventures starring Robert Downey Jr. in the leading role.

According to Deadline.com this Sunday morning, Disney/Marvel Iron Man 3 kicked off the North American summer movie season in 4,253 theaters with $68.3M Friday and a very good -6% hold for $64M Saturday. ”

And in more good news, “With a -20% Sunday, that’s a $171M-$175M domestic weekend that puts Iron Man 3 on a path to the #2 biggest Friday-Saturday-Sunday opening ever (now occupied by Harry Potter And The Deathly Hallows Part 2 with $169.2M).  Audiences gave Iron Man 3 a coveted ’A’  CinemaScore so word of mouth should stay strong.”

His grandfather, Robert Short, the pioneer and visionary for the soap opera genre, where he was the executive in charge of programming for Procter and Gamble Productions for over 20 years, turns 92-years-old today!  On-Air On-Soaps wants to give him a big birthday shout out to him from us, and all the fans!  Short was the man behind iconic shows such as: Guiding Light, Search For Tomorrow, Edge of Night, and As the World Turns among others!

For a taste of Iron Man 3, check  out this trailer below!  Will you be going to see the movie asap? Let us know!

Recent films have been getting a lot of backlash. iron man 3 is getting a lot of backlash for gwyneth paltrow’s elitism and strange opinions on food. She’s gotten a lot of hatred for the obvious ploy to help her image and promote her film when people named her “most pretty” actress. Same w/ amc alum amanda seyfried’s new film. It’s a remake of a french film where an adopted Vietnamese char is abt to get married. Stupid remake from hollywood changed the Vietnamese char to Latino bec hollywood is racist and obviously not comfortable w/ portraying an Asian american… Read more »