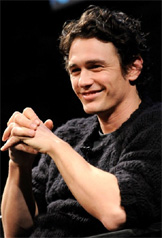 I have to say, James Franco is doing a fantastic job bringing attention to soaps right now, not only with his acting, charisma, and performance art connections, but also his writing.  Check out his entry in a new piece out today by the actor entitled, The Limits of Control which is on Lapham’s Quarterly website.  In the piece, he details the control actors have in certain parts of the medium they work in, which adds to their performances or possibly subtracts.  Franco wrote these words below, which to soapers, means he completely “gets” the soap actor’s style and what they have to work with.

Franco, Recently, I performed in the soap opera General Hospital. It is easy to make fun of soaps, with their melodramatic plot lines, constant exposition, unnatural lighting, swelling music, and lack of action. Most of these aspects are due to the extreme speed at which soaps are produced. With five episodes a week, at least sixty pages need to be shot in a day. That’s a feature film’s worth of material shot every two days. This pace allows for very few takes, usually one. Soap acting is generally considered inferior to other acting, with the lack of takes cited as the reason. However, there are many fine film performances that are made up of just a few takes: Clint Eastwood is famous for doing one or two takes when directing; Robert Altman was very loose with his direction, always looking for spontaneity and truth; Gus Van Sant does very few set-ups, and very few takes. Innumerable directors of Oscar-winning films have used such techniques. The reason that soap actors look the way they do is context—how they are filmed, what they are saying, and how they are blocked. There is absolutely no way to act in a soap and pull off a performance like Daniel Day-Lewis in There Will Be Blood, Robert De Niro in Raging Bull, Meryl Streep in Sophie’s Choice, or Marlon Brando in On the Waterfront. These incredible performances are supported by the incredible filmmaking that is behind them. They are given the time, dialogue, space, and aesthetic of films made by great directors.

This isn’t to say that soap opera performers are worse than film actors, or that their performances are inferior. The soap opera performance should always be perceived in context: it involves actors working in a tradition that soap audiences have come to expect and love. Soap actors are delivering exactly what they are supposed to—they are in tune with their audience and they are not attempting to transcend it. If Brando had tried to play Terry Malloy in a soap, he wouldn’t have had the time to sculpt the performance into the brooding, tortured, nuanced emotional force that won him an Oscar. The contender wouldn’t have been a somebody, instead he’d just have been another mumbling dope with bad eye makeup.”

So what do you think of Franco’s thoughts on soap acting?

ATWT films it's final episode and its a sad day in Brooklyn :(

James franco is so full of it. This whole article is somehow “justifying” his film star self going into soaps. And it’s quite backhanded. Can’t he say “I went to soaps so I could try all kinds of mediums. Period.” and then he could shut up abt it forever. He’s saying that soaps are crappy bec that’s what the audience expects them to be. Certainly majority, if not all of the soaps are in bad, crappy states, and the ratings reflect that. There’s a lot of disatisfaction now bec of the bad writing and worse performances. But most probably nothing… Read more »