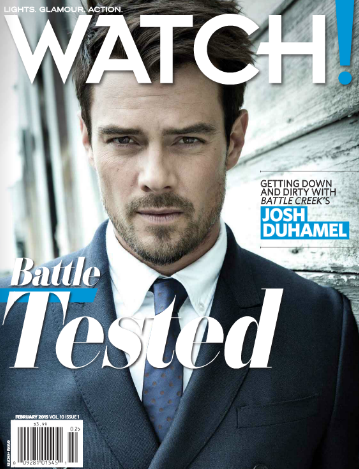 In it, Josh plays a charismatic FBI agent with a dark side named Milt Chamberlain.  The series is one of the most highly-anticipated of 2015 not only because of Duhamel, but because Battle Creek is from Breaking Bad creator Vince Gilligan, and is executive produced by David Shore, who was responsible for the hit drama, House!

In a new interview feature, and the cover story of the February edition of CBS Watch! Magazine,  Duhamel explains why he wanted to make sure his new TV character was not just a pretty boy, but had quite the dark side to him, too!

And the actor discussed his hard knocks and big breaks that led him to his success in motion picture and television including: his first major role that of Leo Dupres on All My Children. The role would win Josh a Daytime Emmy for Outstanding Supporting Actor in a Drama Series in 2002.  Here are a few excerpts from the interview below:

Josh on landing his first acting gig on All My Children: “That was really exciting.  I was pretty green, but I took it very seriously.  I remember telling myself, ‘This is sink or swim. You’ve already abandoned the idea of a dental career. You’d better succeed. ” (Laughs)  I wanted to break the mold of what people were going to expect of me on the show, try things that were outside of the box, and when I got the Emmy nomination my first year, it was like ‘Holy s***- they like me!  They really like me!'”

Josh on what was his Sally Field moment winning the Daytime Emmy: “It really was.  It was like ‘F*** you, former football coach, F*** you, ex-girlfriend I found in bed with one of my teammates. F*** you, all those people who didn’t believe in me!’  Totally unhealthy, but that was the fuel that drove me. I had a lot of anger.  I’m a much happier person now.”

Below watch Josh’s Daytime Emmy winning moment from 2002! Then let us know what you thoughts of his comments to CBS Watch! And, if you are excited to see him in the premiere of Battle Creek!

GENERAL HOSPITAL: Ava Down, Franco Takes Himself On A "Trip" & "There's A Bomb On The Boat!"

Y&R's Robert Adamson's Update On Linsey Godrey's Condition: "She's Been Through Worse Than This And She'll Be Back On Her Feet Before We All Know It"

after watching the Battle Creek trailers, I am looking forward to becoming a fan..
It looks awesome, exciting, for sure!

Ah, that’s when the Daytime Emmys really were the Daytime Emmys. All the glam, all the gowns, great clips and a large enough field of players that the awards really meant something. And how cute was Josh Duhmel running up to the top to hug his family? I was a fan from his early days and going from the crowd reaction a lot of others were as well. I wish him well in his new venture.

isn’t that the truth : heartfelt back then

Josh Duhamel was loaded with talent and notwithstanding… his brother , played by Vincent Irizarry and mother, Marj Dusay !

AMC hit the motherlode on this trio…. pulled out all the stops and transfixed the audience

Those were the days. Missing AMC & OLTL. Josh, you are a gem!