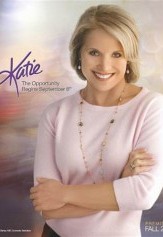 According to an ABC press release, the new Syndicated Katie Couric talk show slated for September 2012 is picking up steam and has been cleared in 60% of the country.

What does this eventually mean for the ABC Daytime line-up, and in particular GH? That has yet to be determined, but for now, if this is any indication, here is what the release stated below:

To have garnered such exceptional clearances in this short period of time is attributable to the enduring strength of the Katie Couric brand and her wide-ranging appeal as one of the brightest, most talented and most dynamic personalities in the business,” commented Marinelli. “We are enormously pleased to partner with such a stellar group of stations across the country.

In June the Disney/ABC Television Group signed a multi-year, multi-platform agreement with the award-winning journalist, best-selling author and popular TV personality. In addition to hosting the new nationally syndicated program “Katie,” which is set to premiere in September 2012, Couric currently serves as a member of the ABC News team. Katie will be produced in conjunction with Disney-ABC and Jeff Zucker will be the executive producer.”

Lisa Rinna Reportedly Heading Back to Days of our Lives!

I hate to say it but this does not look good for General hospital. Seems like late September is when all the soaps had their final air dates. Guiding light and All My Childern both went off around that time.

gh soap fans need to pull their heads out of the sand.. the show is going to be going off-not moved to another time slot.. has no one figured out that abc is run by lies and liars… they need to cancel who wants to be a millionaire and that horrible Rachel ray… although she is better the the spew

Dear Katie, You really should never have stepped into the whole “General Hospital” soaps war matter, bad ju ju for you and your “career.” Karma, as you know, can be a real bitch! Let’s get one thing straight: You are no “O” and you never will be. When you left Matt and the Gang at Rockefeller Center, the Peter (Katie?) Principle took hold and your ascent upward to epic failure in the Ratings, continues unabated. Sadly this time for you, you have linked up with the rank toxic incompetent trio of Burbank Buffoons: ABC Disney’s Anne Sweeney and Brian Frons… Read more »

I am sure ABC has some deal with PP to send GH packing in Sept. 2012. GH would have to start pulling in numbers like Y&R to stay on ABC and that is not going to happen.

Leah…there is a difference between syndicated shows and network shows. Millionaire and Rachael Ray are both syndicated. They are not owned by, nor do they work for ABC. Katie is another story. She is the only real threat…so although you don’t like Rachael or Meredith, they will only be a problem if ABC gives the local affiliates that time slot to schedule as they like. For now…Katie or The View… or anything owned by ABC is all you need to worry about. taking the GH spot. Give Meredith and Rachael some slack…until they come to work for ABC. Since Meredith… Read more »

Jill farren phelps or however you spell it i agree should go.

That woman is a BITCH and she like the SHREW will go to HE__!! Frons and and his cronies will join them!!! These shows will NOT succeed!!!! I have STOPPED watching ABC for the most part THEY need to do away with this company!!

By the time Katie joins ABC Daytime, I think the Chew will be ready for the axe, if not already gone by then, and they can slip Katie in that timeslot, or (if they must) move GH to the earlier timeslot and put Katie at 3pm . Honestly, if they remove GH from the ABC Daytime lineup, then clearly all of this was a sinsiter plan from day 1 (which is quite possible). I understand that a soap is much more expensive to make and keep up with than the new shows they are replacing them with, but, in no… Read more »

I have been following soap operas for 40 years now and I believe come March or early April, 2012 ABC will announce the cancellation of “General Hospital”. So sad, but so true. Just what we need…more talk shows.