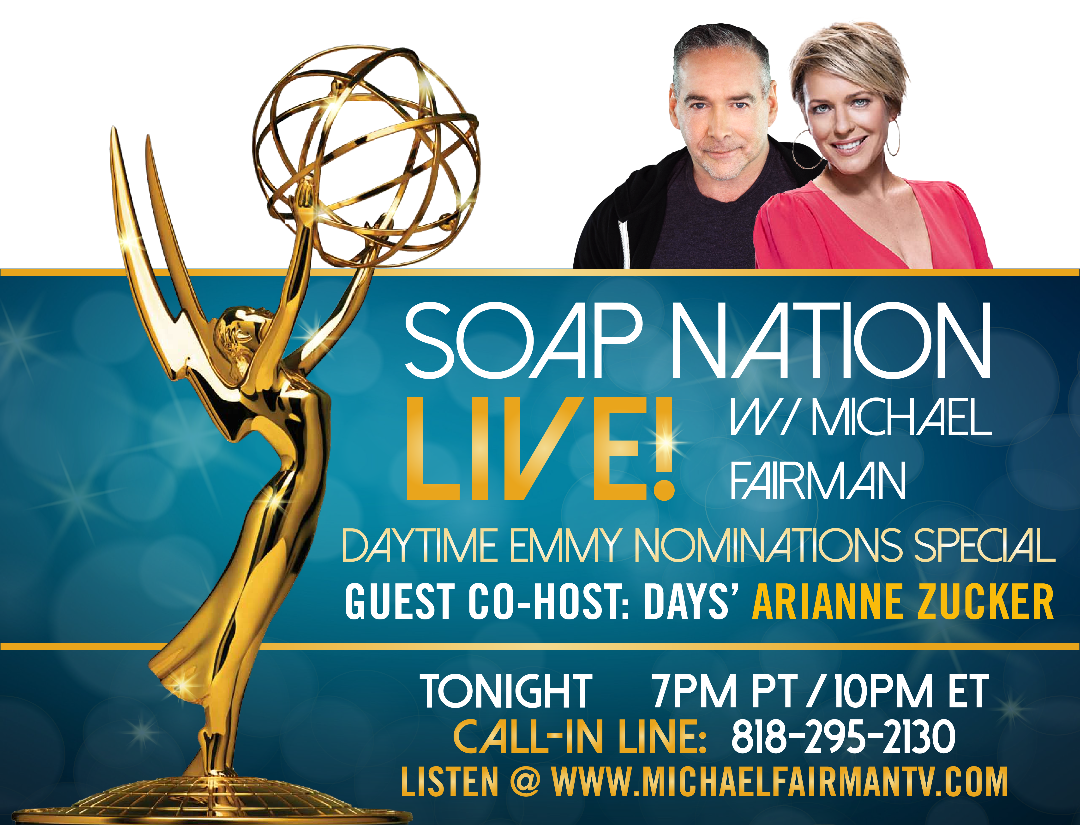 Join Michael and his in-studio co-host Days of our Lives‘ Arianne Zucker (Nicole) for our 90 minute plus Daytime Emmy Nominations spectacular as we chat it up with some of the actors who will be going for gold on Emmy night on Sunday, May 5th.

Arianne and Michael will be joined by NATAS Senior VP Daytime Emmy Awards, David Michaels who will be on hand to offer commentary on the Emmy voting and more.

Make sure to also listen for our Daytime Emmy trivia game show segment, when two callesr can win a pair of VIP tickets to the upcoming Coastal Entertainment,”Teals Got Talent”; the upcoming GH Fantasy Event, this time in Philadelphia on May 4th to benefit the Sandy Rollman Ovarian Cancer Foundation,

To call-in and share your thoughts on the nominations of who got in, and who was snubbed and more, or to pose a question or a comment to any of our guests, dial the exclusive listener-line at 818-295-2130

This special live-stream begins at 7PMPST/10PMEST.  You can also head on over to Soap Nation’s Live official show page at Spreaker.com  if you have any trouble listening to the show here.

If you are tuning in shortly before 7PMPST, you will hear some musical interludes before we go live for showtime.  We hope you enjoy the show.

I JUST LOVED the “phone call-in” w/Beth Maitland. WHO ???? does not LOVE to bits this woman !!!! I will stand shout from the mountain tops.. how, she’s always been one of my favorites. she shared.. the tidbit… that back in 1984-85 season.. that she was the “first” actor to win an emmy ???? !!!! LOL can you believe that… 35 years ago. at that emmy …she was awarded “Best Supporting” later on in the show… Traci Bregman recht won for younger actress. there you have it… AND now..it would be such a hoot to laud this lady. this floored… Read more »

the FUNNY thing, is : according “wiki” by all accounts it didn’t emmy another actor for like another 5 years ???? so KUDOS to this duo who from the get go had this love hate “relationship” speaks volume tho, no? of how the audience is so vocal and LOVE LOVE LOVE Traci and Lauren.

thee Abbotts are so loved… and this show truly deserves MORE than “Just jack” when the executive producers and head writers toy with the Abbott clan. argh! it’s heart sick… when they are far and away above the Newman.

How come it says Tyler Christopher as one of the nominees that called in to chat? He wasn’t on.

Tyler was on the show, but there was a technical glitch during his interview. We spoke to him again following the broadcast and it will be included in the replay of the show starting tomorrow.

I have watched for decades… seeing any disruption of my go to… Tyler, without, is pause for

that’s why he’s the “dream that never dies”

Thanks for the reply Michael. I didn’t even say, but I really did enjoy all the interviews (even by the stars on the shows I don’t watch). You can hear real camaraderie and sense of community and appreciation from just about all of them for the opportunities they have and the recognition they receive from it. And you, Ari (whom I adore!!!) and David asked great questions and sounded like you had a lot of fun. I deeply appreciate David’s enthusiasm for the genre and his knowledge about the shows, actors and characters. I look forward to hearing Tyler’s part… Read more »