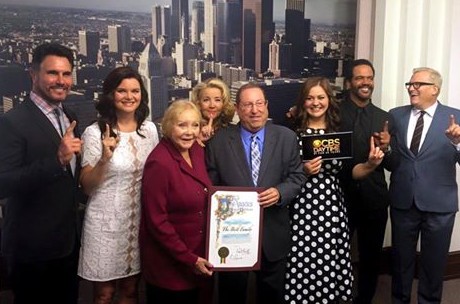 When CBS Executive Vice President, Daytime Programs, CBS Entertainment, Angelica McDaniel started off Tuesday with a tweet stating it was a “Big Day”, fans on social media did not know what was about to go down.

But it was a major day indeed for Angelica and the shows of the CBS Daytime programing line-up of: The Young and the Restless, The Bold and the Beautiful, The Talk, The Price is Right and Let’s Make A Deal.

The Los Angeles City Council proclaimed September 20th as “CBS Daytime Day” in honor of the network’s accomplishments for being 30 years consecutively as the number one daytime network.  CBS ended the full 52-week 2015-2016 broadcast year again at the top, a position it has held since 1986.

McDaniel shared in a statement: “This winning streak is an incredible source of pride for all of us at CBS. It speaks to three decades of great storytelling from the best creative artists in front of and behind the camera, and the amazing support from a very passionate and loyal fan base.”

GENERAL HOSPITAL: The Verdict Is Read In The Case Of Julian Jerome!

give the benefit of a doubt

when Billy Miller and Michael Muhney left or were erroneously fired… their final scenes aired January, 2014

which is ALMOST 3 YEARS AGO

How many soaps were there during the past 30 years?????

gives every listing and ratings of every serial

gobsmacked to the gills

As The World Turns… turned an reigned for quite a NUMBER @ #1. YES

which is my only #1 soap… evah

what are the odds of that… huh

oltl was great in its final year and with ratings up-had it not been cancelled it might had hit number one!!!

I think the last soap that was #1 was Days when Jack and Jennifer got married.

Fabulous episodes. Still some of my favorite.

The first time they got married. 🙂

I don’t think the CBS soaps have really been number 1 for 30 years. I just think even when the soaps weren’t good, people watched out of habit.

There were certainly times when Another World, Santa Barbara, One Live to Live, General Hospital, and Days of Our Lives deserved to be number 1, but weren’t. Only naming soaps I’ve watched.

The numbers are more accurate now than they’ve ever been because we have reall time counts and real reporting instead of extrapolation and polling. GH is my favorite but, Y&R is numer one. It’s not debatable. It’s just the truth.

I’m not debating the numbers. I meant, substance–I don’t think CBS soaps have been the best soaps for 30 years straight.

Let’s not forget CBS DAYTIME has been number one for 30 years– in those 30 years there were other soaps on that network that help them achieved that feat– it wasn’t all just Price is Right, Y&R and B&B–