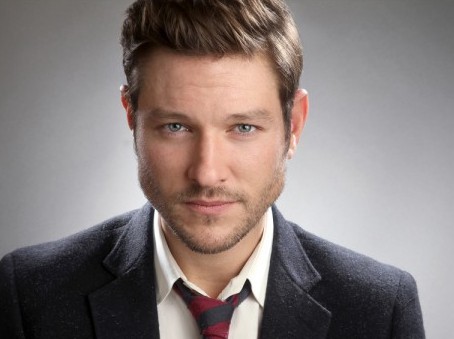 On Thursday’s episode of The Young and the Restless, fan favorite Michael Graziadei begins his guest appearance when he returns as Daniel Romalotti.  That will put Graz back in the orbit of his on-screen mother Phyllis, played by Gina Tognoni, and his half-sister Summer, played by Hunter King.

Daniel’s return to Genoa City is timed just as Summer is soon to be married to Luca (Miles Gaston Villanueva), and viewers will have to tune-in to see just what Daniel thinks of the not-to-be-trusted Luca, and just how he figures into the drama that is about to go down.

On-Air On-Soaps caught up recently with Graziadei when he spoke of returning to the set of the CBS Daytime drama series and how the return came about. Michael recalled: “I got a call from Y&R asking me to come back.  It worked perfectly with my schedule as I have been shooting a show in L.A,  Good Girls Revolt for Amazon Prime, and I told them as long as you guys can work out the dates, I said, ‘Why not?’  They asked me to come back for story surrounding the 11,000 episode celebration.”

This is the first time fans will see Michael in scenes on-screen with Gina Tognoni as Phyllis. The role was previously played by GH’s Michelle Stafford.  Michael said of working with the two-time Daytime Emmy winning dynamo: “Gina is wonderful!  I knew her before for years, but never had the opportunity to work with her.  I got to work with her, and it was great.”

When he returned to Y&R to tape the episodes that viewers will see beginning today it was very special to Graz:  “It was like coming home.  You see all the faces of the people you loved and cared about all these years. “

Of course, Y&R fans remember Michael paired with Camryn Grimes before Cassie Newman died.  When Michael returned to Y&R for this visit he saw Grimes in her newest incarnation as Mariah!  He commented: “Wow!  They have her playing a whole different character now!

Several years ago, Graziadei make the decision to exit Y&R, and here he tell us why:  “It was super tough decision, and as I said being back here felt like I was coming home.  This was my family. But at the time I was trying to do guest spots on primetime and movies and what not, knowing that at some point, whether you are fired, or you decide to leave on your own there is a whole other reality out there that you have to face.  I tried to prepare myself for it as best as I could.  I just felt like I just had really done so much here that I didn’t know what else I could possibly accomplish, that I wasn’t already doing.  And I wanted to take that leap of faith and challenge myself, and see if I could have a career in this industry outside of The Young and the Restless.  It has worked out really well, and I am living the dream!”

So, are you looking forward to seeing Michael today on Y&R?  Will Daniel protect Summer for marrying Luca at any cost? Share your thoughts in the comment section below!

I have never been happier than to see Michael’s beautiful, familiar face ( sans facial hair, LOL) on Y&R.
Love him to pieces. He is truly exhibiting his Italian roots by his polished, Milanese fashion sense.
Why is he back? Why now? To support his sister? Help his mother and everyone else ‘unmask’ the villainous Luca?
Regardless….I hope he stays a while.

Eager to have Daniel back on the canvas. I think Genoa City and do well with some fresh (although familiar) air to liven up proceedings.

Unanswered questions..
Enquiring minds want to know;
How long will Michael Graziadei be with Y&R..

( a guest appearance, how long?
A full return?

he’s working on a series he’s not staying

Thanks, davlestev1..
awwww I don’t like that! I want him to stay 🙁

It was so nice to see Daniel back. Waiting patiently for him to meet up with Cassie look-a-like Mariah! O.M.G. Would it ever be something to see Daniel get involved with Mariah, not just because of the reaction Kevin would have ( since Kevin was his best friend) but what would it do to Sharon? What GREAT writing /acting lately. I cried over Adam getting 10 yrs. Chelsea acted her heart out with these scenes and Adam was nothing less than fantastic as usual. The only part of the show that was a bummer was too much Summer. Sooooooo great… Read more »

LOVE the guy. He smiles with his eyes.

The day ahead show in Canada today is not to be missed. The interaction between Mariah and Daniel was short with a promise of the excitement ahead. So great to have him back for a visit.

Hopefully he is back for four episodes to take Summer to never never land!

If he takes Summer and Luca to never never land let him take Stitch with him.

…..to the island of Forgotten Toys

I love the fact that Michael Graz is back, just wish he’d get rid of that Cheech and Chong facial hair but I’m guessing he has to have it for the role he’s playing on another series with Amazon Prime. Still, it does not look good on him. Other than that, I love having him back even if it is only for a short stint.

FINALLY a good episode of Y&R! Maybe the best so far, this year? Adam going away to prison and him looking back at Victor, Nikki, Chelsea, Conner and Nick as he walked away in shackles was great acting! [No words necessary] Adam being abducted by Victor, a twist! Dylan taking a swipe at Victor when Victor called him “Boy!” Glummer and Puka were tolerable. But the best part was Daniel. Never a big fan BUT he lit up and fit in the room quite nicely. I looked at him and wondered what he was up to with that facial hair?… Read more »

I wish he would rejoin the cast again and not be just a guest appearance he could bring so much to the show again. Have missed him so much he is a good actor and I am glad he has a life after Young and the Restless but really wish he would come back at least for awhile and stir things up.