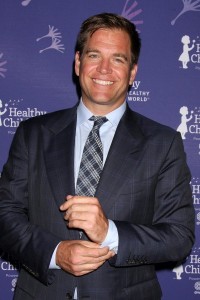 Soap fans remember Michael Weatherly in his younger leading man days as Cooper Alden on ABC’s Loving, which then morphed into The City, before being cancelled.   It was there he met his first wife The Young and the Restless Amelia Heinle (Victoria), who played Steffi Brewster on the ABC soap.  The two have a son together as well.

Weatherly over the past 13 years has become one of the beloved faces of primetime television in his role as Special Agent Tony DiNozzo on CBS’ bonafide smash hit NCIS.   On Tuesday, reports surfaced that Weatherly is exiting the show after his long-running tenure and success.

CBS said in a statement: “After 13 years on NCIS, Michael Weatherly is leaving the show at the end of this season. He is a valued part of the CBS family, and the immense charm and talent he brings to the screen as ‘Very’ Special Agent Tony DiNozzo has helped make NCIS what it is today – the No. 1 drama in the world. W e thank Michael for all of his contributions to this successful franchise and look forward to continuing to develop projects with him as part of our ongoing development deal.”

Meanwhile, Weatherly took to his Twitter account to say:  “DiNozzo is a wonderful, quixotic character & I couldn’t have had more fun playing him over the past 13 seasons. Les Moonves & CBS gave me the opportunity of a lifetime. I will miss the amazing crew & cast, who are like family to me, & to the fans all over the world – THANK YOU, it’s been a fantastic ride!”

All of this comes just four days after, Michael pleaded no contest to driving under the influence and was sentenced to a three-month alcohol and Mother’s Against Drunk Driving program.   However, Michael will still be working with CBS in the future, he has a development deal with studio counterpart CBS Television Studios.

So, do you remember Michael as Cooper Alden on Loving? Do you watch him on NCIS? Suprised to hear he is departing the wildly-successful series? Comment below!

Perhaps Days will bring him in..
Days has a hot recorded for bringing in new players.
yah never know.lol

cool can’t afford him what planet do u live in?

I wasn’t much of a “Loving” fan, but I certainly miss the days when there were that many daytime soaps to watch! I can see where Michael would be ready to take on another character. It’s hard for actors to play the same character year after year and maintain other ranges in their acting abilities. I do think it would be funny/cool if he did a 1 or 2 episode cameo on GH. Wouldn’t be the first time they revisted “Loving.”

You’ll be missed on NCIS but I will follow you on whatever show you land on! Kinda hope it is a comedy as that seems to be your strong suit!

Have liked Michael since his ‘Dark Angel’ days with Jessica Alba. And he has certainly played a big part as Anthony DiNozzo in the success of NCIS (one of my favorite shows). But 13 years on the same show is a long time. Maybe he just feels he wants a change…especially since Ziva isn’t there anymore. The show seemed to lose it’s luster for me when she left…and I think for his DiNozzo character. He’ll be hard to replace.

I was taping NCIS for a friend who lives in another country, and I got hooked into TIVA. When she left, I quit watching it, and my friend lost interest too. For most women viewers, we’ve gotta have some romance! I am hoping against hope that Cote de Pablo will make a guest appearance to usher Michael out.

I think I might have kept watching if Tony had made any references at all to keeping in touch with Ziva, pining for her, but no, just like a soap, he moved on. That is not what we ladies wanted to see.

I was writing a reply and my computer decided to update and boom, I only left part of a reply. In any case, the new girl seems to need coddling. Ziva could take care of everyone, and I really miss that.

Wow. That’s a surprise. He’s So Great on #NCIS. MY HUBBY loves this Show. Never misses it. How will He be written out. That will be interesting. Big void when His character leaves

Bring him to Bold and Beautiful for Brooke!!!

Michael Weatherly is too good for that washed up blonde.

Could t agree with you more.

he is the main reason I watch NCIS and especially Robert Wagner’s appearances. He will be missed and I will probably move on from NCIS.

I’ve watched NCIS from the premiere episode to last night’s. Michael’s infusion of his own charm into Tony’s persona has made Agent DiNozzo more bearable, because Tony has so often been a louse and a bully when it came to his colleagues. Tony has called Tim every McName in the book and belittled him at every opportunity. However, I think it will be a huge loss to the show when Michael exits.

I wish him the very best in his new pursuits, and look forward to seeing him in future primetime CBS shows. He’s definitely a keeper!

Of course I remember him from LOVING! I had a huge crush on him. I read an interview back then wherein he stated he loved Elvis Costello’s music. So I bought a CD. He was right. He is good.

Michael Weatherly is that rare talent that can do BOTH comedy and drama especially well. He will be just fine without NCIS.

I would love to watch him on Y&R as the new Billy. And send Jason Thompson back to GH as Patrick . So he can stay and Emma can stay. Because If Michael Weatherly plays billy he can be reunited with his real life wife. Its a major win-win. Its the perfect solution. He could play the perfect Billy and paired up with Amelia.

Um, I doubt he would go back to daytime, and he and Amelia have a child together but have been divorced for many years now.

Isn’t Amelia married to the guy who played her Y & R husband J.T.? I didn’t know she was married before

Yes, She is married to the actor that played J.T., but back when her and Michael were on Loving they were married and had a child. Many years ago, and it was only for a couple of years.

Weatherly married his Loving/The City co-star Amelia Heinle in February 1995.[1] Heinle has one son with Weatherly.[1] The couple divorced in 1997.[1]

Also, I would like to see Billy Miller back on Y & R. He was the best Billyt Abbott EVER!