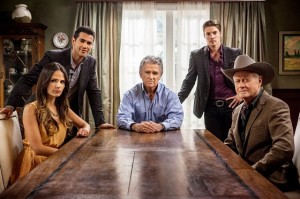 The wait is over! Tomorrow night, Monday January 28th ( at 9PMEST/8PMCST on TNT), kicks-off the second season of the Dallas reboot, and with it all the drama, backstabbing and double-crossing, plus all the heat at Southfork! Monday’s episodes also begin the countdown to Larry Hagman’s final episode as the iconic villain J.R. Ewing!

Dallas begins its new season with a special two-hour premiere, and in the second episode, Daytime Emmy and Tony winner, Judith Light debuts as Harris Ryland’s mama in which she said to be even more vindictive than her on-screen son played by Mitch Pileggi!

In fact, in the latest issue of TV Guide on newsstands now, they revealed: “Early in the season, Ryland opens is home to his diabolical mother”.  Pileggi described to TVG his Oedipal relationship with his mom as “about as weird and creepy as you can get,” with one scene finding Light tending to her hospital-bed-bound son with too much affection!

Now after the jump, we have a mini spoiler-alert! We have provided the tune-in information for the two-hour premiere! If you don’t want to read it, you can skip it and go right to the newest Dallas teaser promo below for the season opener! Then let us know, what you are most excited about when Dallas starts up tomorrow night?  Are you looking forward to seeing Judith?

The battle for Ewing Energies heats up as Christopher and John Ross clash over opposing visions for the company. As Christopher seeks to gain the upper hand in his divorce from Rebecca Sutter, a game-changing revelation turns everything on its head, causing the entire family to put their differences aside and rally together — except for John Ross, who uses J.R.’s dirty little tricks to take revenge on Christopher and Elena. Meanwhile, Ann is blackmailed by her ex-husband, Harris Ryland, forcing her and Bobby to confront a shocking secret from Ann’s past.

Hour Two – “Venomous Creatures” – Monday, January 28, 10 p.m. ET/PT
With Christopher and Bobby at the helm of Ewing Energies, and Elena working to gain a stronger foothold within the company, J.R. and John Ross strike a deal to wrestle control of Ewing Energies away from them. Meanwhile, Pamela Rebecca Barnes schemes with John Ross to take half of Christopher’s shares in Ewing Energies to fulfill her father’s desire for revenge against the Ewings. And Ryland’s mother, Judith, (guest star Judith Light) proves to be just as evil as her son.

Kale Browne to The Young and the Restless to do Voice-Over Work!

Love Judith Light and already loved Dallas! BRING IT ON!!!

Finally something to watch on Monday’s nights — can’t wait.

I can NOT wait. BEST primetime show in years…..I believe TNT is doing last season during the day for those who want to start watching.

Love Judith Light, but she does not seem old enought to play the mother of Harris.

I was thinking the same thing – maybe they should have made them brother and sister instead, but I’m still so excited for this season to start already!!

I thought so too.
Judith Light is too young to play Mitch Pileggi’s mother.
But we’ll see.

Horrible casting – they should have been brother and sister.

I can’t wait to see how Judith’s character plays into this. It’s going to be interesting.

I have to be reading this wrong. Judith Light playing Ryland’s mother???? She is THREE years older than he is. This is pushing the limit even for a soap. Major turn off & I am as big a Dallas fan as they come. Haven’t watched tonight yet but DO NOT like this.

Loved the episodes! So glad it’s back!

What an opportune time for Harris to “man” up… step up to the plate… and “mirror” JR’s quality(s)…. The guy you loved to hate….

Dallas… relationship between JR and Bobby… cannot be matched…

Anns ex…. Harris… caught on immediately… as a potential “bad” guy…. his scenes with Ann and Sue Ellen, and Bobby were on par.

he’s already an established character from season 1… this would lessen the blow, if you will… on the dearly departed Mr. Hagman.

It was FABULOUS, and Judith fit right in. I am going to love seeing her take swings at the Ewings. Lol

Watch the show last night- love it. So many twists and turns, double dealings and secrets revealed- a jam packed two hours. Thought Judith pulled off being the matriarch of the Ryland clan beautifully. Looking forward to next week-

It always amazes me how much of a womanizer and manipulator John Ross is. In the first 10 minutes he’s already charmed the pants off of a woman that is getting married and turns out to be the daughter of the man who owns the truck fleet he wants to buy. I shouldn’t even be surprised that he’s still trying to get back at Christopher and Elena. My DISH co-worker says that J.R. is just fueling the fire by reminding John Ross that the “other” side of the family is always against him. I’m just excited about the drama this… Read more »

Love,love,love Dallas!!watched it years ago and it is still the best!!! What a surprise to see Judith Light!! She plays a great evil character. I agree with others that she’s too young to be playing a 60 year olds mother!!! Can’t wait to see upcoming episodes!!!