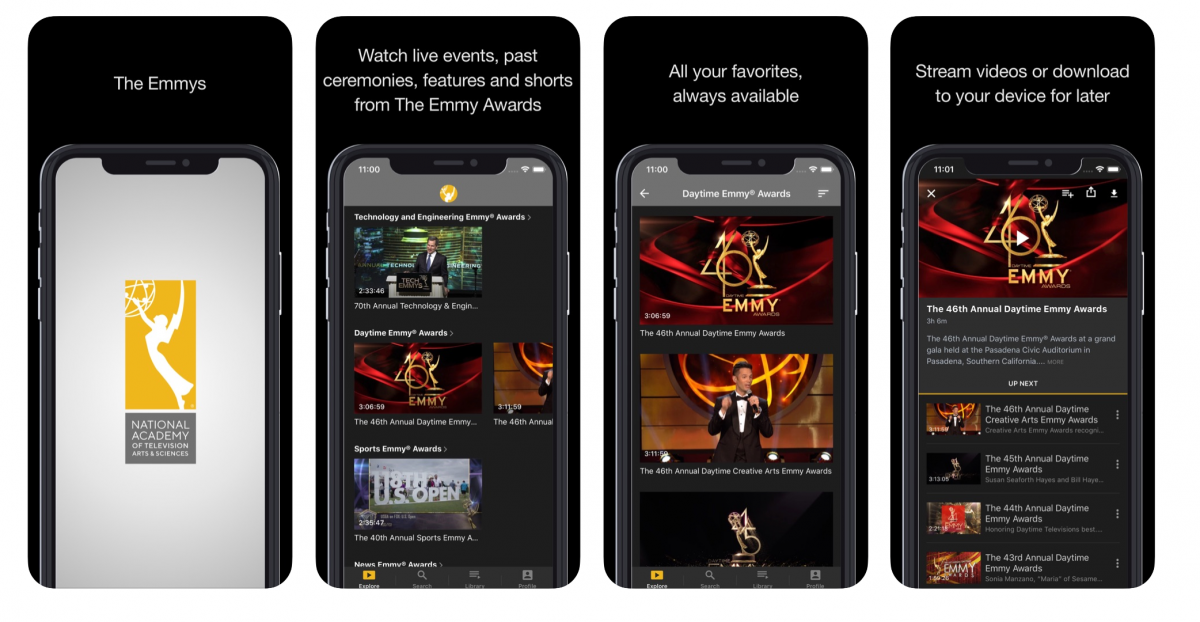 There is a new app for daytime fans to enjoy! On Thursday,The National Academy of Television Arts & Sciences (NATAS) announced the launch of a dedicated online viewing platform for the Emmy Awards ceremonies it produces.

The new platform will also feature exclusive “Behind the Emmy” interviews, memorable moments from past Emmy ceremonies, historical archives, and events from the National Academy’s 19 regional chapters.

Kathleen Barrett, SVP, Enterprise, Vimeo shared on this venture with NATAS: “More than ever before, virtual experiences have become a powerful component of our daily lives. We’re proud to partner with NATAS and to offer Vimeo’s best-in-class streaming technology, seamless user experience, and uncompromising support to the Emmys’ many fans. Now global audiences can unlock the awards content they know and love without missing a beat.”

All programming will be viewable on the web at watch.theemmys.tv Apps are available for iPhone, iPad, Apple TV, Android phones and tablets, Android TV, Fire TV, and Roku by searching for “The Emmys” in the Apple App Store, Google Play Store, Roku Channel Store, or Amazon FireTV Appstore. Users may download content for offline viewing on iOS and Android and sync watchlists across multiple device

Michael Fairman TV chatted with NATAS President and CEO, Adam Sharp to glean more insight and get more details on this exciting step-forward to house Daytime Emmys of the past, present and future and more.   Here’s what he shared below on the organization’s latest endeavor. 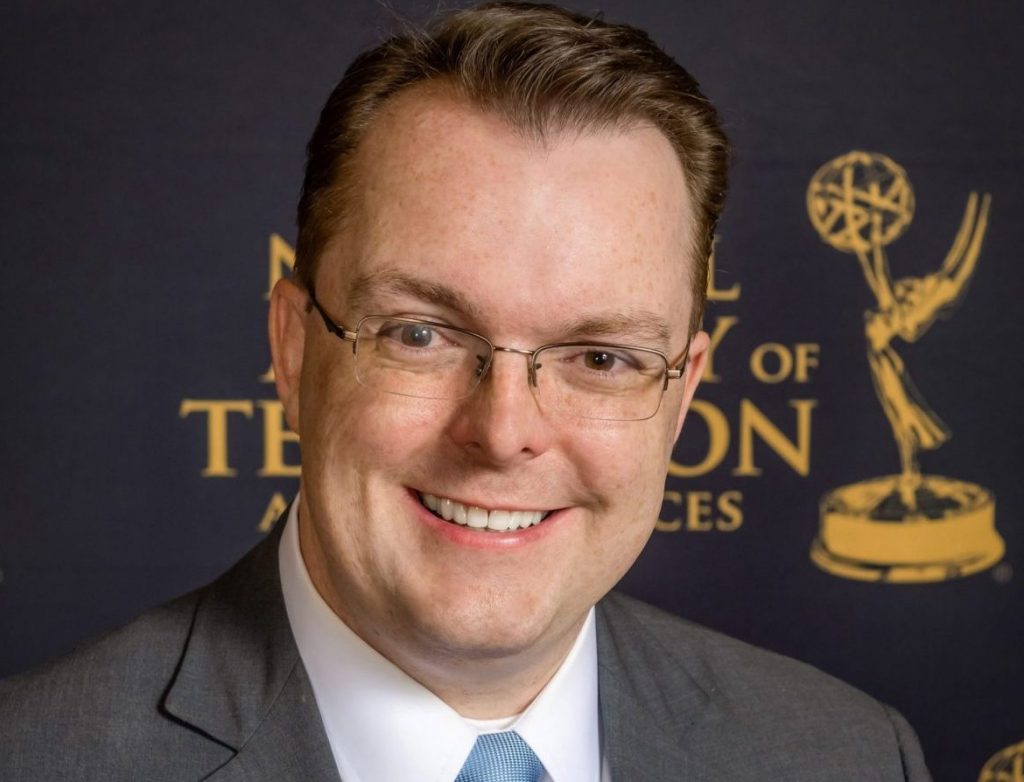 You simply called the name of the app, “The Emmys” which will make it easy for users to search, find and download, etc.  What can you say about the features contained within it and on it?

ADAM:  You will be able to watch from any platform, and actually, by creating a profile, sync from across those platforms.  For instance, you can start watching something on your phone and finish watching it on your Apple TV.  You can start building a playlist as we start putting more content in it.  On launch, the focus is going to be on these upcoming live shows, but we are going to be building out a back catalogue – all of last year’s shows are going to be in there.  We hope to build that out to be a complete archive of our ceremonies.  We will have clips and highlights from past shows; we will be building out “Digital Originals,” that Behind the Emmy franchise if you will, and building out interviews.  Eventually, you will be able to watch all 19 regional and local Emmy ceremonies from around the country on the app as well.

It’s such a great idea to finally have a centralized place where people can watch past Emmy moments and ceremonies, instead of having to go fetching around You Tube to watch, for instance, A Martinez’ 1990 win for Lead Actor for Santa Barbara

ADAM:  That’s where, I think, we really have an opportunity when doing interviews with past winners on their Emmy-winning moments and more in our Behind the Emmy segments.   You know, even The Bold and the Beautiful at 33 is the young one on the block in soaps, that so many of the performers today have memories of a character or a performer who their parents loved, who their mother loved, that they watched on that when they came home from school, who inspired them to go into this field of television.  So, to talk about that inspiration and then to be able to recognize that is a great opportunity for us. Certainly as you saw in the 47th annual Daytime Emmys telecast we had the countdown of top moments from the past, and you got a feel for some of that rich history that we are able to celebrate.

Is “The Emmys” app available everywhere or just domestically?  Could somebody who is out of the US access it?

ADAM:  It is available everywhere.  Now, certainly when it comes to rights and clearances, our focus is globally, but if there are compromises to be made, the platform does allow us to restrict things to the US, or elsewhere, on a as-needed basis.

How did the idea come up of “Let’s do an Emmy app”? It is forward and current thinking in terms of the world we live in today with social media, phones, and tablets; where many ingest most of their information and content these days.

ADAM:  It was very much a priority since I came to NATAS.  In many ways, it was a response to the fan disappointment in that the Daytime Emmys had not having been on television for many years, and while we did have it streaming online the last several years, and while there are ways to get that live Twitter video, or that Facebook video, or the YouTube video on your TV, it was certainly not as easy as it will be now by just launching the app, and it’s there for you.   We are the National Academy of Television Arts and Sciences, our honors should be able to be viewed on that TV screen in the corner of your living room even though television has changed over the years, and we are now consuming it on our phones and other devices. It all started there in the living room, and that’s where we belong.  Even as this was coming together last year, the question was always, asked “When are you coming back on television?” and the answer was always a very coy, “Hundred percent confident that you will be able to watch the 2020 Daytime Emmys on the TV in your home.”  And nobody every called me on it! (Laughs)  When I gave the answer, I didn’t know what path was going to get us there.  By the fall, we were literally going back and forth on one hand with CBS and the other hand with Vimeo, which was our partner in building out the OTT platform.  It was a fortunate result that we wound up achieving both, but I think that speaks to the regrowth of Daytime, but also the fact that television is no longer a single thing.  When you look at the growth of the Daytime Emmy competition in particular, this year was the biggest competition in terms of the number of entries, beating last year’s record by almost double digits, and a lot of that growth was from streaming content.  There is a reason why Netflix and Amazon are right there in the top 3 most nominated networks; there is a reason why Apple TV and Hulu are already making waves in the community.  So, to have this model now where fans of the traditional broadcast soaps, who are used to watching it on their broadcast networks, or the networks’ own OTT experience, like CBS All Access, I think will be great for them.  The Emmys have been around for over 70 years.  We survived black and white, we’ve survived HD, and we’ve survived lots of things because as the definition of television changed, we changed with it.

So, what do you think about the new app and viewing platform for the Daytime Emmys?  Excited to see the kind of content that NATAS intends to populate it with including past shows, moments, interviews, and the current Emmy ceremonies? Comment below.