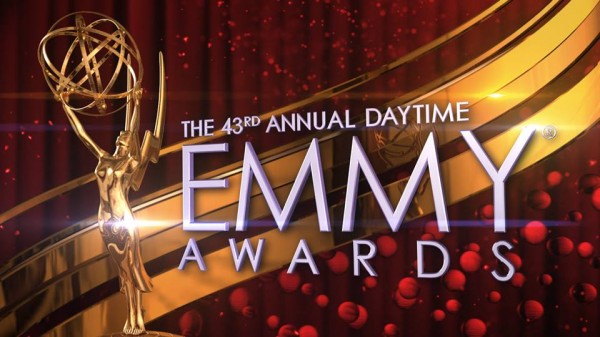 After an unofficial version of the 43rd Annual Daytime Emmy Awards made the rounds on internet sites early Monday morning, NATAS was quick to point out that this was not the official version and theirs was forthcoming.

Now good news on Wednesday morning has that the organzation that also spearheaded the Daytime Emmy Awards production this year has formerly posted the correct version on their You Tube channel.

In addition special video packages and presentations throughout the ceremonies including: the Lifetime Achievement Award to Sesame Street’s Sonia Manzano, the In-Memorium tribute which includes many soap opera icons who passed away this past Emmy season, and On-Air On-Soaps Michael Fairman’s produced package on the social issues on the soaps which involved storylines over the years and today that have touched peoples lives including: B&B’s transgender storyline and the plight of the homeless, DAYS coming out, autism, and same-sex marriage and GH’s HIV/AIDS, breast cancer and bipolar disorder among others.

Watch the official presentation of the 43rd Annual Daytime Emmy Awards after the jump and let us know what you thought of the show, the speeeches, etc in the comment section below.

What is different from what you posted on your Web site previously?

They are NATAS… an important part of getting news .. interviews and staying relevant.. He very well will post this from them no matter who else released the same show. JMO…

I just finished watching the Daytime Emmys. Two comments. Way too much emphasis on ‘Maria’. Sesame Street is not daytime television. It is kids programming.
2- Did someone at GH give the wrong sheet music to the music director?? Every time GH won they played THE OLD THEME!

Sesame Street is on during the day isn’t it?

1- its because the Lifetime Acheivement honoree was Sonia Manzano, who played maria. plus anything starting from 2:00 am to 6pm, the Academy considers it daytime television.
2- Yeah that surprising. but, i think maybe the old theme was easier to plsy with a band than the new one.

Thanks so much for posting this! 🙂

Eric is correct regarding what the Academy considers ‘Daytime’ tekevision. However the question to ask is ‘Who is the target audience of this awards show?’ It is us…the soap crowd. When it was announced that the awards were not going to be televised who got upset? The daytmie drama contingent. Or the 5 year olds who watch Sesame Street? Surely there is someone in the daytime drama field who deserved a lifetime achievement award. The amount of time devoted to honoring a performer from Sesame Street was disproportionate. I love Rita Moreno however she hasnt been on The Electric Company… Read more »

I actually enjoyed the segment to Sonia and liked seeing her clips and I do not watch Sesame Street. She apparently has been in the biz for 40 years.

I watched the daytime Emmy’s tonight. I thought it was understated. Considering they were in a hotel banquet room the production was not too bad. I was glad there was no commercials. Most unnecessary talk was left out and presentation ran rather smoothly. I am glad I got to see the production.

I have never seen Sesame Street. However, it is a daytime program. I, too, enjoyed Sonya’s segment. She and Obba gave the best acceptance speeches.