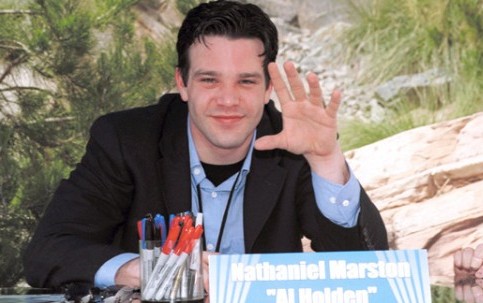 To read the exclusive story at PEOPLE.com today on the life and struggles of the late Nathaniel Marston makes his passing all the more heartbreaking.  Last Saturday, his former colleagues, friends, family, and mourners gathered together for his memorial service in New York City.  The report on the service noted that those who gave eulogies all remembered how the soap star would envelop everyone he met in his arms.  His longtime co-star, Kathy Brier (Ex-Marcie, OLTL) sang “”Hallelujah,” Nathaniel’s favorite song, as the clergy led a processional of candles.

Nathaniel was most known for his performance as Al Holden and Michael McBain on One Life to Live and as Eddie Silva on As the World Turns.  He died on November 11th after traumatic injuries suffered in a tragic car crash in Nevada.  And as those few weeks went by, Nate’s mother, Elizabeth Jackson updated OLTL and ATWT fans, friends, and colleagues of Nathaniel’s gut-wrenching day-to-day physical status.

At the time of his passing, it is now revealed that Nathaniel was looking for a fresh start in show business after kicking his drug habit that his mother says she believed started in 2003, when he fell from a roof, smashing his heel and breaking his back.  It was at that point he began taking prescription medications.

Jackson noted: “I think the hardest thing for Nathaniel was that he didn’t know how much he was loved. I think because he was an empath that he felt other people’s pain, and that caused him pain … I think he felt people’s spiritual pain, and I think that’s where his demons came from.”   She went on to detail that in 2012, Marston moved to Gerlach, Nevada, after getting clean and found a new life in the rural community where Jackson also lives.

The most ironic and sad part of Jackson’s account said about Martson’s plans for the future: “He was on track, and he was ready to roll. He was ready to go back to pilot season. He said, ‘Mom, I’m gonna buy you a ranch and we’re going to raise the most beautiful cattle that you’ve seen in your life. I finally found something that I love to do beside acting.’ ”

What do you think about the memories shared by Elizabeth, and this continuing poignant ending of the life of Nathaniel Marston? Share your thoughts in the comment section below.

What a lovely article and tribute to the amazing Nathaniel. He was very much loved by so many people. Thank you to Elizabeth Johnson for sharing her beautiful son with all of us. May he rest in peace.

Sending light and love to his family and friends. R.I.P. Nathaniel. Thanks for the memories. You are missed.

i still can not believe this beautiful soul is no longer with us – he seemed like such a gentle giant………..RIP nathaniel

Oh man what his mother said is not only beautiful but totally true. It does sound like he was sensitive picking up other people’s issues spiritually and that can really cause demons. I totally understand that. It can make you feel like a bad guy or low self esteem and you have to learn how to block most of that.

And I’m glad he was very close with God, that is great.

So tragic, I remember the spark he had with Kathy Brier. I loved the fact that OLTL paired a classic looking leading man-type with a plus-sized beautiful woman. Their real-life affection for each other shone through their characters. It goes to show you the enduring affect actors in soaps can have on the show’s viewers. Even though I had not seen Nathaniel on screen in years, I was still so sad to hear of his passing. RIP Nathaniel.