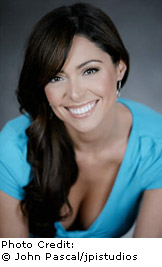 Jessica Leccia’s new interview by Michael Fairman at Advocate.com titled: “Natalia’s Curtain Call” addresses Leccia’s views on the lack of intimacy in the Otalia storyline that has frustrated fans of the duo and Guiding Light for months.  Also of concern, had been the way in which the show decided to faciliate the actresses maternity by making Natalia pregnant too!  Leccia also speaks about her upcoming role in the new web series by Crystal Chappell, “Venice” and more about the sad final tape days of the long running series.  Here are some excerpts below:

There has been much made about the lack of physical contact Otalia had throughout its run. Can we look forward to any show of affection between the two before we go off the air?
I think the whole thing was always an issue, but it was also an issue for the characters and it was something they had to talk about. It was something so out of their realm of what they were used to in a relationship, and as characters they did address it…the fact that they would function as a real couple meant intimacy and everything. To be honest with you, it depends on how you were looking at the story. If it were up to me, we would have been together in a physical way all the time, but we did not exist that way as a couple at the beginning. The beauty of it was, we did not have to be that way for people to get that we were in love. It was refreshing that people got it without all of that. However, if it were up to me, there would have been a lot more affection shown between the two characters.

So we won’t get the long-awaited romantic full-on kiss planted on one another, and then have the gals go hand-in-hand skipping down the street?
We don’t skip. I know that for a fact. [Laughs] I tried to skip at one point and I was told I looked ridiculous and that is a true story. You can ask Crystal about it. She said, “Don’t skip.” Basically, it’s going to play out in normal Natalia and Olivia fashion. There is not going to be some big heavy make-out scene. 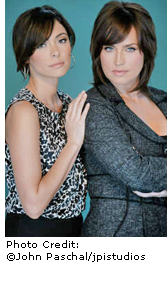 You have signed on to play Crystal Chappell’s love interest in her new Web series Venice. It’s so admirable that you have decided to continue what Guiding Light started with a same-sex romance. Obviously, if GL would have stayed on the air, it would have continued, but this is a great way to keep the LGBT audience engaged in soaps and with your work. Tell us your thoughts on Venice and why you agreed to be a part of it.
Honestly, Crystal and I have been touched by feedback we have gotten from the Otalia story line. I think this idea in part is due to that feedback. Crystal is an entertainer and smart. She realizes this is what people want to see, and it’s a really valid slice of life that maybe people don’t see enough of. And she has got this idea and she said, “Do you want to do this with me?” And I said, “I will do whatever you want,” because she is Crystal! She has got something really nice on her hands, and if she wants me to be a part of anything, I will.