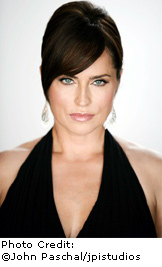 In a brand new interview feature posted this morning, with DAYS and Venice star, Crystal Chappell, the biggest celeb in soaps talks to TV Guide Canada’s Nelson Branco, about her final days as part of GL’s Otalia, the launch of Venice, her reprising the role of Carly on DAYS, her back stage rumored battle with former DAYS star Deidre Hall and much more. There are many insightful quotes from the actress in this full length feature. Here are just few very tantalizing excerpts! Make sure to read the interview in its entiirety.

TVG: It’s funny because you almost left GL to re-join One Life To Live as a Paige recast in 2005 [La Chappell played Maggie Carpenter on the show from 1995-97]. Had you left, Otalia would have never been born. Clearly, fate had bigger plans for you.
CC: Towards the end, I’d say the last three years of the show, we all had a stronger sense that the end was coming and the show would be cancelled. I mean, we were always hopeful, but you could feel the end was near. So, the feeling amongst the actors was: do we want to still be here? Yes, I had an opportunity to leave, but I’m glad I couldn’t [contractually] quit because in hindsight, I wouldn’t be where I am now without having stayed until the final days. And not just for Otalia; I really am blessed that I stayed until the end of the show because I love GL and I probably would have regretted leaving.

TVG: Is it spooky being back on DAYS? On GL, you were changing in cars, eating in outhouses, and Ellen Wheeler was running around like a mad woman doing everything from craft services to holding bible readings! One of my DAYS set sources remarked how shy and quiet you have been on set since you’ve returned.
CC: [Laughs] It’s been overwhelming! My first few weeks I was like, “Omigod, the cameras move! Look at the lights! We have light! Omigod, we have lights!” [Laughs] Yeah, between DAYS and Venice, I have to be very focused. When I’m on the DAYS set, I don’t even have my crackberry with me, so that’s what they are seeing. I also didn’t want to step on anyone’s toes.

TVG: Why did you leave DAYS? There were rumours that you and Deidre Hall didn’t get along.
CC: If there were issues with Deidre, I didn’t know about them. I would guess that she didn’t like me very much, but I could be wrong about that. I was a troubled young person. I was overworked. I made a lot of problems for myself. I was suicidal. I was in a very, very bad place. I left, not because I thought I’d be a big star; I left because I needed to get my health back. As for the rifts, I don’t know. I was very miserable to be around at that time. I spent most of time in between DAYS and One Life in therapy.