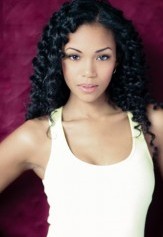 The Young and the Restless is bringing in another new character to the canvas, when actress Mishael Morgan debuts on the June 14th episode in the role of Hillary Curtis!

According to Soap Opera Digest, “Her first scenes will be with Daniel Goddard (Cane) and Christel Khalil (Lily).”  Just what Hillary Curtis will be up to when she mixes it up with the Genoa City crowd, remains to be seen.

Mishael Morgan recently guested on the CW series, Supernatural and appeared in the film Total Recall.

Who do you think the character of Hillary Curtis is being brought in for?  Or, how is she involved in the Cane and Lily story? Could she have a past with Tyler (Redaric Williams)?  Share your thoughts!

Y&R's Joshua Morrow Speaks On The Paternity of Summer That Will Rock Genoa City!

She will probably be Tyler’s ex. I would love to see her with Tyler or Noah. Looking forward to her coming to the show.

Too many new faces. Why are they not focusing on the core families? Y&R is losing its core.

Actually I don’t care. All the new characters being brought in take story away from the core characters. Enough already. I want the writers to focus on the characters that I have been watching for years. I’m not interested in new characters

She’s gorgeous. I want her for Noah

I honestly would only care if she turns out to be a love interest for Devon. It would mean that the writers are actually invested in him, otherwise I don’t care.

Is he still on the show?

He is still in the opening credits.

Yes He is on the show once a week for two mintues.

Am liking a strong present of A-A characters, YR always was unique and diversity in their minority casts but last regime had great A-A actors but lousy stories.

Another new cast member ? Really? Why? WHY?!

Can she be a new love inerest for Adam? I love Shadam but Adam and Sharon need a break so they can get their crap together. In the mean time I don’t want Adam involved with that nasty con who is punishing him by keeping him from knowing about his baby. Let Adam hook up with the new beauty in GC.

I’m so tired of all these newbie characters, I really don’t care about them, even if they die. The death of Dylan & Leslie/Tyler Dad’s made me laugh. Death means nothing if we don’t know the characters or the characters associated with them for a long period of time. Why don’t they start up a new soap if they want a new cast?

Just what we needed — another new character from the writers that brought us Adriana, Detective Chavez, Mason, Tyler, and Dylan.

I think JFP has made sure Y£R makes excellent casting choices lately. They are doing all the right things to stay on top with a relevant audience unlike when the Bell’s were in charge. They have finally stopped catering to the oldest sector of viewers and developed a story young people are interested in seeing so they will finally get a better percentage of the key demo watching. I love the fact that every generation and great diversity is showcased. The show is at the top of its game!

The Oldest sector make up the majority of the viewers. They made a gigantic mistake with the recast of Kyle. The previous Kyle was great. The new one is ugly and creepy.

So, how long have you been working for CBS?

I think she will be Rose because we have not seen her.

Problem for me is that I don’t care about Leslie, Tyler, Gus, etc. They are too new to have major story built around them. Frankly, Redaric Williams is not that great an actor. Typical JFP move to go for a pretty face without substance. Force feeding the audience a character or story just doesn’t always work.

I feel bad for Kristoff St. John. The last few years he has been saddled with poor story and now some mediocre talent to share scenes. Neil has been an integral part of Y&R for decades. Why can’t they get him better story?

I welcome new characters IF they are intergrated well with core and legacy characters AND they have solid story. It takes time to find the love. I hope producers/writers have a long-range bible and stick to it. Surely Bill Bell had ideas he left his children (although I amnot sure his daughter-in-law adhered to it!).

All these new characters and recasts. i dont recognize the show anymore

Why can’t the writers come up with good stories for the charaters they already have? Just another charater with a lousy story line!! Getting to the point of not caring, which if enough start to feel like me that could spell the death of Y&R.

Totally agree with you!

Y&R needs to endear the fans with the recent loss of Jeanne Cooper. Focus on core family members and stop bringing all the new characters in. I FF through all scenes with Dylan, he does not work on this show. JFP will never let him go however.

I think Rose will turn out to be Drucilla. Gus probably was her father. We were never told of Drucilla father. We were told of how the Abbotsford maid, Mamie wasDru’s mother’s sister. I think Dru ended up in Chicago after falling over the cliff with her
in Genaoa citylost. I think when Neil and Lesley go looking for Rose, I think Neil will see that it it Dru. It will turn out Dru and Lesley are sister’s. The character of Dru is needed to callPhyllis out on her sh#t.

huh? We met Dru and Olivia’s father. This girl is way too young to be Dru. She looks younger than Lily.
Anyway, I don’t care for new characters.

I am over all the ” new faces” that have no relevance to Y&R. JFP and the writers don’t have a clue about Y&R tradition and the core characters that are Y&R. The story lines right now are BORING or just lame!
Too much focus on the “teenagers” and their immature story llines … It’s like the Hollywood Heights of daytime TV.
Y&R will never be the same without the legendary Jeanne Cooper! If there is not some much needed improvement in the near future, I see Y&R signing off the air for good.

I know they usethis storyline all the time on this show, they should go a pass and haven’t it turn out Dylan was the baby Nikki had years ago.
The

Yes yes yes…i am very happy about YnR finally shoving things up… They know that the younger viewers are the ones that can increase thier rates…. Umm glad that they are going to get an actress that can bring it like Dru and the previous Lily… Dont get more wrong…I like Kristel… but she doesn’t really portray a very good black woman…. Maybe this lovely young lady will be Rose… or the X who Broke Tylers heart…With his sexy delicious self…I can’t wait.. Ive watched 4040 yrs and black American wants to see our characters portray us!!

First of all, something was lost in the translation above. The newbie that has been cast has a totally different name and is not being cast as “Rose.” So, Rose could very well be Dru and I sincerely hope so. I also hope it is Victoria Rowell. No one can play that part as well as she. We need a strong African-American woman in the mix again. I am sick of Lily. She fought to be Cane, has two beautiful children with him and is drooling over Tyler. Get over it before you lose your husband. Please bring Dru back.

Sorry – I meant “she fought to be with Cane…

I don’t hate the new characters ( yet) , just want them to be better actors. Sometimes painful to watch. Hang in there everyone, gotta get better right?

Some kind of way she will tie into Neil. Lost daughter? Something with Rose? It was a little emphasis when they met.

I think she is neil daughter

I think Hillary is Rose’s daughter and blogger intent on making Winters family pay for her mother’s death.

READ MORE
The Bold and the Beautiful Projected To Resume Production In June; Although Situation Remains Fluid
Continue Reading
Advertisement