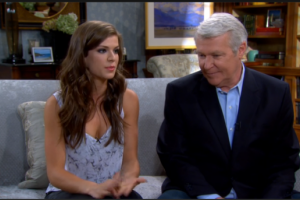 On today’s episode of MORE One Life to Live, host Leslie Miller sit-down with Jerry verDorn (Clint) and Kelley Missal (Dani) to talk about the latest on Clint Buchanan’s relationship with Viki, and Dani’s wild side behavior.  In addition, we learn some acting tips given to Missal from on-screen mom, Florencia Lozano (Tea), and Jerry’s adoration for his co-star, the one and only Erika Slezak (Viki)!

Later, n the most intriguing segment of MORE One Life to Live, the series casting director, Alison Goodman gives the viewers insight on how she cast the roles of the SORAS’d Matthew and Destiny (Robert Gorrie and Laura Harrier) and the decision to cast Corbin Bleu as Jeffrey King!  Finally, from the main players to the extras, MORE takes a look at what it is like being an extra for a day on the set in Connecticut and on soap as opposed to being a background player on a movie set.

And in preparation for Snoop Lion’s return to Llanview next week, we get a glimpse of him in action, plus his newest find, Iza will perform the new OLTL theme song, which she recorded and is heard on the opening sequence of each episode!

Watch MORE One Life to Live after the jump, and let us know what you thought of it, and what segment interested you?

UPDATE On Hunter Tylo's Status With B&B: A Rep Relates,"Still In Contract Negotiations!"

I now understand how they cast the new Matthew and Destiny. What I don’t understand is why they tested them for chemistry the way that they did. The chemistry between Matthew and Destiny was never sexual; their relationship was a sweet, but complicated friendship. Now there’s not even a hint of that. I honestly think the writers are writing these characters as if Matthew was never there for Destiny when she gave birth to Drew, as if the fight they had after Matthew’s return from the hospital was their last scene together. THIS would make so much sense as to why Matt’s an asshole. Now we have no idea what changed his mind from the time Drew was born. I mean, he named his son for crying out loud with Bo right there! It makes no sense. Guess we’ll have to wait until Matthew and Dani have a relationship, she dumps his ass (again!) and he goes crawling back to Destiny… that’s if she’ll still have him, lol!

I watched One Life to Live for the stories and characters. It is difficult to care about the characters the way they are writing the show. I do not care for coarse language and do not enjoy watching explicit sexual scenes. This is not interesting to me, as I like the human stories of a soap.

I agree with you. They have gotten away from the heart-warming stories which I enjoyed so much!

READ MORE
Stacy Haiduk On DAYS Exit: "Let’s Not Write Kristen DiMera Off Quite Yet! Is Anyone Really Gone in Salem?"
Continue Reading
Advertisement