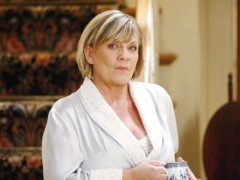 On this Christmas Eve, On-Air On-Soaps salutes One Life to Live with a toast of eggnog for it’s brilliant Christmas episode that aired this past Wednesday on ABC Daytime. There were so many great one-liners, and so many great moments it is hard to know where to begin, but leave it to daytime legends, Erika Slezak (Viki), Robin Strasser (Dorian) and Kim Zimmer (Echo) to make this one holiday episode of the soaps we won’t soon forget.

From watching Viki and Dorian trying to rid Echo from completely ruining Viki’s Christmas, Todd’s son Jack, and the very cute new little Sam (even though his line delivery is not so good, we can forgive him!) fighting over the belief of Santa Claus, John giving Natalie his mother’s ring for their engagement and announcing the news to the family, Kelly and her pink goggles given to her by Joey, Starr and James poignant moment near the end of the episode, and the Angel Square Christmas tree lighting (And let us say, beautiful Christmas tree! Props to the set designers for that one), the show had it going on.  And the piece de resistance, Echo coming down the chimney at La Boulaie dressed as Santa!

But oh those fantastic one-liners,  some of the best.  Here are just a few:  Viki to Dorian about getting rid of Echo, “Please help me, I would say nice things about you in public.”  Dorian to Echo (once she gets trapped in Dorian’s plot to help Viki detain Echo, about her faux Santa Claus outfit PR campaign), “Yes it will be great.  The Mayor who delivers the goods with good cheer.”  And our personal favorite, after Echo is stuck on the rooftop dressed in Santa suit to keep her warm while screaming for help, inside La Boulaie Kelly says to Dorian, “Did you hear something”? And Dorian responds, “The wind?”  Kelly then has the zinger, “It sounds like an echo!”  Also, kudos to OLTL for their juxtaposing of Jack and Sam’s reactions to seeing Santa “Echo” Claus.

Watch the episode below and Ho-ho-ho…Happy Holidays!

I only watch Florencia Lozano and Trevor St. John (and Kelley MIssal), so this was a no watch for me.

Wow, then you really missed out on a great episode !

This was very good but B&B with Thursday and Friday’s episodes were a tie or better. OLTL was very funny but B&B was very heartfelt and very much the true Christmas spirit!

I agree, Michael! OLTL had the best Christmas show this week. Although, I watched Y&R today and really loved it. Well-written and very much in the season. I am loving that show more and more. It’s so much better than the ABC soaps on most days.

I agree. It was so great seeing Viki and Dorian working together to get Echo out of the house. I hope Echo sticks around. Seeing Viki just about every day is joy. The show is on fire right now. Almost everything seems to be working well. Kelly is entertaining….I love that Blair loves Kelly’s line “I got Lemon in my eye”. LOL. I think I am going to use that one too.

I have to agree Michael… it was the HAMMER! I loved GH and YnR, but OLTL was so much fun, yep! It delivered big-time. The BnB Xmas Epis were disappointing, where was Eric and the Family around the piano singing Christmas Carols? Where was the Cast Christmas Greeting? While I did love Anthony’s singing, it would have made more sense for Brad to have done these episodes on New Year’s, giving hope to the homeless with the message that Hollywood Cares. But.. as usual, his timing was off and the Xmas feeling was far from on the mark! Thanks for… Read more »

I loved the entire episode! Jack was a riot! He sure takes after his father. Love that Viki and Dorian teamed up to make Echo disappear. My absolute most favorite part of the show was John on his knee again giving Natalie the ring, and what a gorgeous ring that was. John is really opening up and he’s one surprise after another. Thanks Michael for a great write-up!

I hope the New Year brings all good things for the people who love soaps! And please Brad Bell make a story for the TRUE FORRESTER HEIR THORNE!

What a well written episode.It loks like there are more intriging schemes about to happen. Clint is up to a new scheme, obviously with Amber, Joe’s girlfriend. I don’t think the new Joe is so great, though. I always love Dorian and Viki and especially now to get rid of Echo. The chimney scene was hysterical. The turkey upside down by Echo was a hoot and funnier went it fell on the floor.I’m glad that Starr went to visit Cole with Hope and mentioning him so we don’t forget him. Amd finally John giving Natalie his mother’s ring. Now, they… Read more »

My favorites were seeing all of the kids included in this episode, the
way it should be for a Christmas episode. I love Carmen LoPorto and
Patrick Gibbons, Jr. (the new Sam) did great with him as Sam and
Jack brought their antics. It was great seeing Hope, Shane, and
Bree, too. Of course, I had to laugh out loud when Echo fell down that
chimney, but the prelude to that with Sam and Jack made that scene.
I wish we would see more of these kids on a more regular basis.

One Life to Live had the best Christmas episode. The scenes with Jack, Sam, Dorian, Blair, Kelly and Echo were the best! Y&R’s scrooge episode was good too, but will it really change Victor? Y&R lately is too crazy for me. Everyone is bed hopping and there are too many new characters who are just aren’t interesting (the Australian crew, Daisy, Heather & Ronan – He has more chemistry with Chloe). B&B reminds me of the old Y&R, since Ed Scott is the show’s new producer. Mr. Scott used to be Y&R’s executive producer.