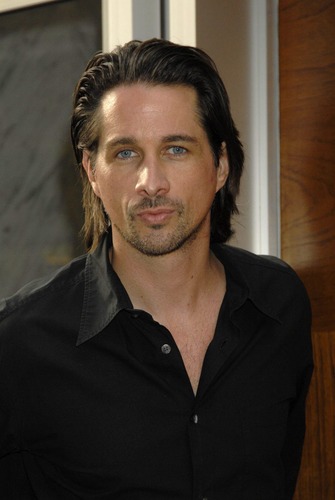 One Life to Live’s, Michael Easton’s  (John) third and final chapter of his series of graphic novels will be out come this October.  The Green Woman (DC/Vertigo), the newest title, is a supernatural detective story co-written with bestselling horror king Peter Straub (Ghost Story, The Talisman). In addition, the hot new promo from ABC Daytime that is perfect for Easton’s fusion of graphic noir novelist, and his character Detective McBain of Llanview on OLTL.

Here are some excerpts from Easton’s new interview with TV Guide Magazine on his upcoming “What If'” webisodes from ABC,  which will reunite him with former Port Charles cast mate, Kelly Monaco!

Easton on working again with Monaco: “Wow, I hadn’t seen Kelly in three or four years and hadn’t worked with her in six or seven. I jumped at the chance. Despite all that time, we fell right back into this very comfortable place.

Easton on the primetime Vampire rage and if Port Charles fang send up was ahead of it’s time: “I think that show was really going somewhere. [Head writers] Jim Brown and Barbara Esensten wrote some really inspired stuff and it was just coming together — and getting really freaky — when ABC pulled the plug. It seems that these days we’re tiptoeing through so many stories that we’ve told before, but our characters Caleb and Olivia had a very different kind of love story and they still resonate with the fans. Vampires suddenly taking over Port Charles was a crazy new kind of storytelling, and everybody in the cast committed to it. We felt like the sword of Damocles was over our head, so why not commit? Kelly, Thorsten Kaye, Brian Preistley— everybody’s work was extraordinary! Had the show lasted, it would have been one of the better things on the network. I really believe that. But ABC saw it a different way. Instead of chasing trends like we usually do, we were ahead of the curve for once and then we let it go by.”

READ MORE
OLTL's Erika Slezak Message To Her Fans During COVID-19: "I Hope Everyone is Well and That We Come Out of This In One Piece"
Related Topics:"What-If's"kelly monacomichael eastonOne Life To LiveThe Green Woman
Up Next

Susan Seaforth Hayes to reprise role as Joanna on Y&R!

Great promo video of Lt. John McBain. Does this mean we can expect similar promo videos for the other actors that have been appearing in short clips at the half way pointof OLTL episodes?

I will always love Caleb Morley, even though alot of fans wanted him and Olivia, I have always loved his interaction with Allison they would have made a great soap couple too!