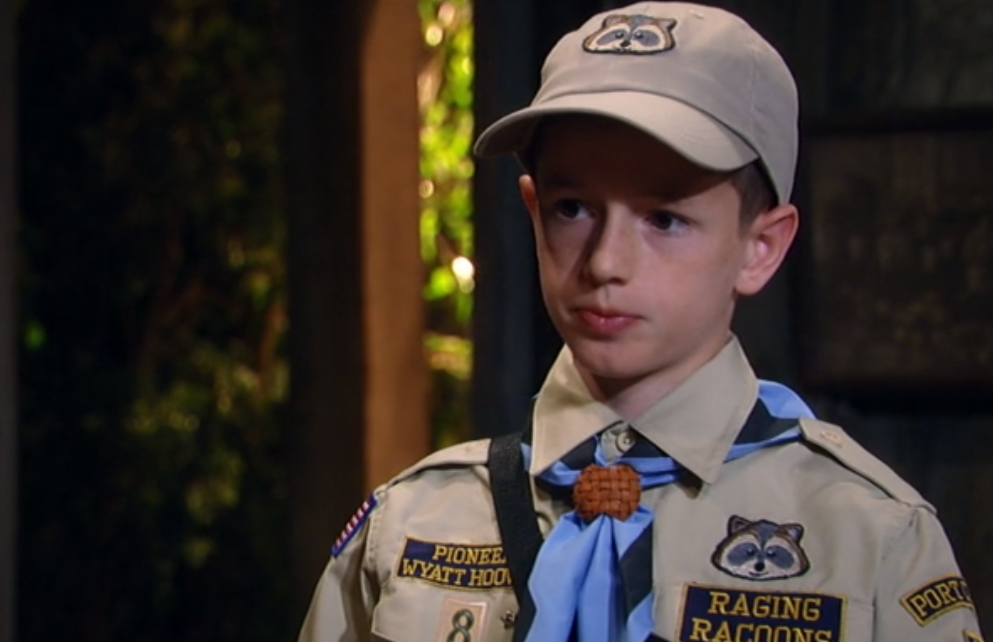 If you caught Monday’s episode of General Hospital, and the tweet tease from the series executive producer, Frank Valentini, a very familiar face to ABC’s One Life to Live fans popped up!

Patrick J. Gibbons (Ex-Sam Manning) was cast in the role of Wyatt.  A young boy who stumbles upon the kidnapped Peter (Wes Ramsey) in the cabin.

In the episode, Wyatt announces he is part of the “PC Pioneers”, Squad #8 other wise known as the “Raging Raccoons.”  He tells Peter he was practicing his bugle to earn his bugle badge when he heard Peter shouting.  Wyatt continues that he found a key under the mat and unlocked the door to the cabin.

Peter begs him to not leave and has a way for him to earn another badge.  Wyatt is not sure whether to believe the guy, but then Peter begs Wyatt to bring a grown-up back to the cabin with him,

With the fireworks about to happen for the 4th of July, Wyatt leaves Peter behind, and says he might bring him back some smores.  However, he forgets his bugle.

Will Wyatt come back for his bugle and thus set Peter free, or will Peter use the bugle as a blunt instrument to club Liesl (Kathleen Gati) over the head with it and escape?

What did you think of seeing Patrick J. Gibbons on yesterday’s GH? Bring back memories of little Sam Manning?  Share your thoughts via the comment section below.

THE BACHELORETTE: Chris Seals His Fate & Reveals He Was Fat-Shamed, Jason Moves Up in Becca’s Heart, Six Now Remain

I love him. I was hoping he would be staying much longer, in a contract role, and that he would need art therapy with Franco. I was so excited to see him, but then kinda bummed, it was only a Day role. I love this kid.

GH could also bring the character of wyatt back if they see the viewers liked him.Also maybe Wyatt tells someone about finding Peter but no one might believe him since the story might seem crazy.

Yes, Jimh…GH could do with a few evil little devil spawns to make mischief in Port Charles…I loved that spooky little guy who played Stonecold Junior Jake to a “t,” not to mention, the now twice-removed actress from the current Joss who once portrayed that “Child of the Corn”-loving youngster…she was a real treat!

i miss those child actors too

I didn’t recognize him! He was really good as Sam on OLTL. On GH, I thought the kid was quirky and funny. It would be fun to see how he plays into this story.

Seeing as how fast soaps move these days, Peter should be free soon instead of the way it was in the glory years when characters would be captive for months on end. To get back on the subject, I do hope Wyatt tells someone at the fireworks so Peter can get help getting out of the cabin.

Scout badges? This kid doesn’t even have any common sense, let alone a conscience. Compare his “smarts” to Spencer Cassadine for a good laugh. I’d be surprise if he could spell “wolverine”.

Did you mean to type that you’d be surpriseD? Well, at least you spelled wolverine correct. Work on your grammar next 😉

i think its very juvenile of you to comment on anything less than his acting abilities. LET ALONE commenting on a CHILD’S conscience and smarts. Sounds like we all know who is lacking the common sense here.

Well, gee, Matt, Franco had the common sense to protect Drew from a predator and he was about the same age. Save your insults for someone else.

Seriously, Matt? Since when can we not comment on a character that’s poorly written? No one’s criticizing the young actor. And by the way, Franco was about the same age when his common sense and conscience kicked in to protect Drew from a sexual predator. Guess it depends on the child.. or the writers.

Perfect response to Soaphound’s comment. Bravo! The actor has done a fine job. I waa so gladto see him again. He has a special bond with franco aka Todd Manning!

Just hope the kid doesn’t come back while Dr. O is there. She’ll eat him for lunch!

I loved him as Sam Manning on One Life to Live. He was super cute and so natural. I loved it when Sam rescued Dorian from Echo. I’m very happy to know that he’s still working as an actor. I wish Patrick a very long and happy career.

Anyone else hoping that we can have Mr. Howarth start playing a dual role…and bring back ( gulp ) Todd Manning. He’s an incredible actor who’s talents are far underused as Franco Baldwin. To the OLTL haters out there, I for one would love to see more of the OLTL characters used on GH. Let’s prove the network execs they are wrong.

I would as well. Missing Melissa Archer, Erika Slezak and Bob Woods. Would love to see them on GH.

I loved seeing Patrick back on screen. I can’t wait to see his scenes with Roger Howarth. I really hope they put Patrick on contract playing Wyatt.

The Wyatt character is not very bright.
I do not know of a boy his age that would be that totally numb-brained.
At times things are too stupid and make my brain bleed.

For Hell’s sake, I know the OLTL fans are still hoping for a complete hostile takeover of GH (and with the “Frodd involved in every damn storyline” thing, it’a already halfway there)

But seriously, this kid?? Even by child actor standards, his performances are cringeworthy. This kid really had a contract role on OLTL??

Patrick is as adorable as ever. It’s been great seeing him and knowing he’s still acting.

I knew it was him. I love oltl.