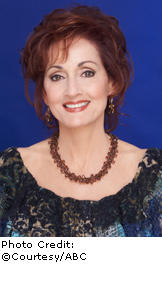 OLTL’s Dorian, the incomporable Robin Strasser talks with Michael Fairman for Advocate.com about her 30th year with the soap, and Dorian’s same-sex shennigans to beat her rival for the mayoral seat, Viki.

The new interview also deals with hot button issues such as: OLTL’s cancellation rumors, KISH being moved to AMC, Strasser’s intense contract negotiations, playing gay in a storyline. Strasser;s work with LGBT community, and in particular on Saturday night as the honorary chairperson for “Marching for Equality..in Heels” to benefit the Matthew Shepard Foundation. is also of high interest in the feature. Here are just a few of the tantalizing quotes from La Strasser!

Gay fans were concerned over the part of the cancellation item that had Kish’s story line potentially being shifted over to AMC if OLTL gets the ax. We can’t let this show fade away!
I don’t have a crystal ball, but if our show did not make sense financially, and if our show did not have the edgy audience and wasn’t this good and didn’t have the passionate audience that it does, then maybe we wouldn’t have survived. Our cast is so diverse, so edgy, and so unpredictable to be filed into a pigeonhole. I mean, we might adapt if need be to a move to Los Angeles, if needed. The cast is a wild a mix of the city of New York itself. If one of the ABC entities has to be branded or rightfully branded in a New York moment paradigm, there is no question it would have to be our show.

Robin, we almost lost you there when you were going through intense contract renegotiations. Looking back, how do you feel about the situation now?
Here is what I want to impart: It was extremely painful for me. I was never for a moment trying to manipulate a reaction from the fans that might generate a different reaction from ABC and the stated immovable offer they were giving me. Then I had a moment of sanity that suffering was optional and that I never made the decision to become an actor to be rich and famous. Somehow the universe was in alignment with that, and I said, “OK, whatever. You can cut my salary, but you can’t cut my enthusiasm.” I still love what I do. And I have been doing it a good long time. I decided it was not about the money. I just got busy doing what I had to do, which is keep being connected to the part and keep being connected to the show because I love it. It does not matter that we take pay cuts, we are still telling stories. I want everybody to back off that whole “it’s fair or not fair” because I will leave the room. I do not want to hear that opinion because it does not serve me as an actor. I am fortunate. I found life so scary as a child, and all I wanted to do was dress up and pretend I was somebody else and hide in plain sight. That is all I wanted. I have been able to do that all my life. There were times I had to take a day job, but not that often. And when I was selling clothes at Henri Bendel’s I was a great salesgirl because I acted the part.