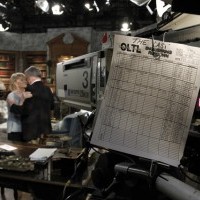 We will never forget the date of January 13th, 2012 as many of our soapers in the viewing audience, and On-Air On-Soaps, gathered around our television sets during the afternoon to do the impossible – to say goodbye to the beloved town of Llanview!

On this date a year ago we had to say farewell to:  the characters we loved so much, the performances by the great talent of the series,  and the stories of the legendary soap.  Through the creative genius of head writer Ron Carlivati and the executive leadership of Frank Valentini, the duo and their teams, delivered to fans a whopping cliffhanger with Victor Jr. very much alive, the hope for happy endings for Viki and Clint, John and Natalie and baby Liam, and much more.

That evening following the final episode, On-Air On-Soaps hosted a One Life to Live Farewell special on the Blog Talk Radio Network that we will never forget.  Listening to the heartbreak of callers from around the U.S, and talking to our special guests: John-Paul Lavoisier (Rex), Melissa Archer (Natalie) and Kristen Alderson (Starr), really brought home how a terrible decision by ABC emotionally impacted not only the fans, but the cast as they shared their sentiments with each other during this special online broadcast.

And as we tried to put in perspective through our final blog on our final set visit to One Life’s New York studios, and through our final emotional video interviews with the cast, nothing could fill the hole in our hearts that for the last year has still remained as it has for many fans.

A year later, Prospect Park is set to resurrect Llanview giving hope to millions that some of the stellar cast will return and the stories will pick up where they left off, or perhaps they will fast forward ahead, that remains to be seen.  But with all systems go, it will be interesting to see just how far the new One Life can go! Can it be a success online and eventually move back to TV?

For now, share you remembrances today on watching the final ABC episode of One Life and help us honor the show that we all know should never have been canceled in the first place!

Tonight: An All-New REVENGE – Jack's In Trouble While Emily and Daniel Get Closer!

A whole year….I was in Florida on vacation waiting to go on a cruise (as I am now),watching the last 4 episodes and then the finale.
Bittersweet it was.
I am genuinely looking forward to the online reboot – who will sign,who will decline,what it means for the actors who are now playing OLTL characters on GH.

Long live One Life to Live! Best. Show. Ever.

I remember watching that Final OLTL like it was yesterday….so sad…I could NOT believe that come Monday my beloved soap which I had watched since the 70’s would not be airing….I felt such a large Void…one I Still Feel….
I am hoping that this PP project is a GO and that OLTL Will Return and with many of my favorite actors and characters! Wish Frank Valentini and Ron Carlivati could do Both GH and OLTL!

Friday January 13 1978 was the last 45 Minute long episode of OLTL (and GH) Monday January 16 was the first hour long show.

Sad to think it has been a year already. Would hope they can get TSJ back to resolve the ending or will GH do that? What about the story continuation mentioned on GH… will that be where the new writers start or will they change direction and start off from the last episide of OLTL?

To move forward you have to accept Change! How do you change perfection and can you ever get back that momentum OLTL had? ..and alittle of it still lives on GH. I’d hate to recast any major characters, but how do you ask those actors/actresses that moved to the West Coast to hunt for employment to move back to the East coast to do an online show that is untried?! I miss OLTL and will be looking forward to it’s revival!! Must have my Jolie back and Jessica and the rest of the Buchanans! Good Luck PP.

One year ago today, the last of OLTL..
I was in shock that it had really happened, OLTL had ended .
OLTL was gone from my life I was a bit dazed and sad ..

This is nothing short of a miracle….. OLTL Fans are fierce, fastidious, and
i’m glad i don’t have to read any more about how much you miss Llanview.

I watched the final two episodes a couple weeks ago and cried like a baby throughout them! OLTL was a part of my life for nearly 35 years. Hopefully this past year was just a long, horrible break, and there’s 35+++ years more of life in Llandview ahead of us.

I still have yet to watch the last two weeks of OLTL. They are on my DVR, and I vowed not to watch them until OLTL was back. I really hope to be watching those soon, (I will as soon as PP taping begins) I couldn’t watch them until I was sure that this would really happen, just too sad. I am so excited! Now I can watch with anticipation, and tears of happiness that Llanview lives on.

Thank you for remembering such a dark day for television and for generations of viewers. I was lucky enough to be in the audience of “The View” the day before on January 12th. It began a day of mourning that in some ways has not ended. Like you, I am a man in his 50s who grew up with OLTL being woven into his childhood memories. Your mention of it was a great suprise! Here’s to you!

I was so sad one year ago today. Even my husband (NOT a soap watcher) said it’s sad that the fans were “dissed”. I miss the show so much! The only saving grace is that ABC is eating some serious crow over this cancellation. All the money spent trying to promote the replacements with lackluster ratings makes me laugh!

I’m glad it’s coming back, but it’s not the same watching a show on the computer.

I can not wait..to watch the rebirth of amc! Thank you prospect park for helping us dedicated fans bring our show and family back into our homes!