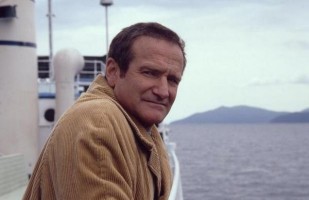 In tragic and heartbreaking news this afternoon that shocked millions of fans worldwide and those in the entertainment industry, and those who admired him, knew him, worked with him, actor/comedian Robin Williams was found dead in an apparent suicide in his home in Tiburon California at the age of 63.

According to Variety: “The cause of death is believed to be suicide via asphyxiation, according to the Tiburon coroner’s office.  According to Williams publicist, who confirmed the news, the actor had been battling depression of late and recently entered 12-step rehab for drug abuse.

The Marin County Sheriff’s Office received a 911 call from Williams’ residence on Monday at 11:55 a.m. reporting the actor had been found unconscious and was not breathing. The paramedics arrived shortly thereafter at 12 p.m. and pronounced him dead at 12:02 p.m.

Many soap stars took to Twitter over the last several hours to share in their grief and sorrow of the shocking death of the talented Williams. S everal had the opportunity to work with Robin Williams at one time in their careers.  Here is  a sampling below!

No one I looked forward to more to listen to and watch than Robin Williams! Rarely have I laughed harder! Now he is no more! Makes me sad!

His movies made me laugh and cry just as hard #RIPRobinWilliams

Tragic news today sorry Robin Williams for the enormous pain you must have felt your comedic genius will be missed.

Today we’ve lost an icon. #RIPRobinWilliams It was a privilege & honor to work with you on @CrazyOnesCBS

My heart is broken… One of the greats…  #RIP

Rip Mr Williams. Damn u made me laugh. I’m still trying to drink cocktails with my index finger.

Patch Adams…my favorite! I can’t believe your gone! You will be greatly missed you incredibly talented man!

RIP Robin Williams  My favorite colleague! I’m blessed I had the opportunity to work with you. TY for the laughs, your warmth &kindness.

Gonna settle in and watch my favorite RW movie tonight with wife and baby. You are one of the greats. God probably got his best bud back.

The news of @robinwilliams took the wind out of me. Ugh! So so sad! You grow up watching someone w/ his talent & you feel like u know them

RIP Robin. You inspired us, infected us with your laughter. The one, the only Cultural Attache to Greece.

Devastated about Robin Williams. I had the pleasure of meeting him; He was a wonderful soul and brought joy to the world. #RIPRobinWilliams

Williams won an Academy Award for Best Supporting Actor for his role in Good Will Hunting in 1997, and also appeared in films: The Fisher King, Popeye, Good Morning Vietnam, Dead Poets Society, Hook, The World According to Garp, The Birdcage, Awakenings, Mrs. Doubtfire to name a few.  Robin’s big career breakthrough came on the ABC sitcom Mork & Mindy and he returned last season to television in The Crazy Ones which also starred Sarah Michelle Gellar only to have the show cancelled.

Share your thoughts on the passing of Robin Williams below …  and let us know what is your favorite Williams performance…  and what soap stars tweet on his death touched you the most?

The Intel On If The Bold and the Beautiful's HOTT Or LOPE Will Tie The Knot In Paris!